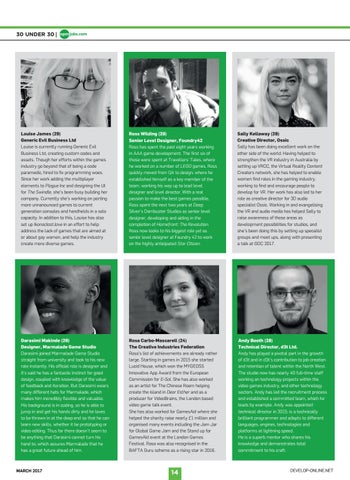 Louise James (29) Generic Evil Business Ltd Louise is currently running Generic Evil Business Ltd, creating custom codes and assets. Though her efforts within the games industry go beyond that of being a code paramedic, hired to fix programming woes. Since her work adding the multiplayer elements to Plague Inc and designing the UI for The Swindle, she’s been busy building her company. Currently she’s working on porting more unnanounced games to current generation consoles and handhelds in a solo capacity. In addition to this, Louise has also set up Ikonoclast.love in an effort to help address the lack of games that are aimed at or about gay women, and help the industry create more diverse games.

Ross Wilding (29) Senior Level Designer, Foundry42 Ross has spent the past eight years working in AAA game development. The first six of those were spent at Travellers’ Tales, where he worked on a number of LEGO games. Ross quickly moved from QA to design, where he established himself as a key member of the team, working his way up to lead level designer and level director. With a real passion to make the best games possible, Ross spent the next two years at Deep Silver’s Dambuster Studios as senior level designer, developing and aiding in the completion of Homefront: The Revolution. Ross now looks to his biggest role yet as senior level designer at Foundry 42 to work on the highly anticipated Star Citizen.

Sally Kellaway (28) Creative Director, Ossic Sally has been doing excellent work on the other side of the world. Having helped to strengthen the VR industry in Australia by setting up VRCC, the Virtual Reality Content Creators network, she has helped to enable women find roles in the gaming industry, working to find and encourage people to develop for VR. Her work has also led to her role as creative director for 3D audio specialist Ossic. Working in and evangelising the VR and audio media has helped Sally to raise awareness of these areas as development possibilities for studios, and she’s been doing this by setting up specalist groups and meet ups, along with presenting a talk at GDC 2017.

Darasimi Makinde (26) Designer, Marmalade Game Studio Darasimi joined Marmalade Game Studio straight from university and took to his new role instantly. His official role is designer and it’s said he has a fantastic instinct for good design, coupled with knowledge of the value of feedback and iteration. But Darasimi wears many different hats for Marmalade, which makes him incredibly flexible and valuable. His background is in coding, so he is able to jump in and get his hands dirty and he loves to be thrown in at the deep end so that he can learn new skills, whether it be prototyping or video editing. Thus far there doesn’t seem to be anything that Darasimi cannot turn his hand to, which assures Marmalade that he has a great future ahead of him.

Rosa Carbo-Mascarell (24) The Creative Industries Federation Rosa’s list of achievements are already rather large. Starting in games in 2015 she started Lucid House, which won the MYGEOSS Innovative App Award from the European Commission for E-Sol. She has also worked as an artist for The Chinese Room helping create the island in Dear Esther and as a producer for VideoBrains, the London based video game talk event. She has also worked for GamesAid where she helped the charity raise nearly £1 million and organised many events including the Jam Jar for Global Game Jam and the Stand up for GamesAid event at the London Games Festival. Rosa was also recognised in the BAFTA Guru scheme as a rising star in 2016.

Andy Booth (28) Technical Director, d3t Ltd. Andy has played a pivotal part in the growth of d3t and in d3t’s contribution to job creation and retention of talent within the North West. The studio now has nearly 40 full-time staff working on technology projects within the video games industry, and other technology sectors. Andy has led the recruitment process and established a committed team, which he leads by example. Andy was appointed technical director in 2015, is a technically brilliant programmer and adapts to different languages, engines, technologies and platforms at lightning speed. He is a superb mentor who shares his knowledge and demonstrates total commitment to his craft.

Human Kind: A first for Develop, this month we focus on human issues affecting everyone from game developers to players. We delve into how games can help inform players about mental health, the importance of diverse representation and the horrors of crunch. This issue also features the Develop 30 Under 30 2017, celebrating 30 of the best humans working in the games industry today. Ron Gilbert discusses ‘improv game design’ and Slightly Mad Studios’ Andy Tudor talks realism in racing games.