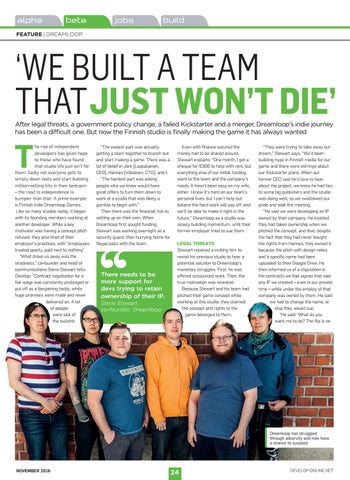 ‘WE BUILT A TEAM THAT JUST WON’T DIE’

After legal threats, a government policy change, a failed Kickstarter and a merger, Dreamloop’s indie journey has been a difficult one. But now the Finnish studio is finally making the game it has always wanted

he rise of independent developers has given hope to those who have found that studio life just isn’t for them. Sadly not everyone gets to simply down tools and start building million-selling hits in their bedroom – the road to independence is bumpier than that. A prime example is Finnish indie Dreamloop Games. Like so many studios today, it began with its founding members working at another developer. While a key motivator was having a concept pitch refused, they also tired of their employer’s practices, with “employees treated poorly, paid next to nothing”. “What drove us away was the shadiness,” co-founder and head of communications Steve Stewart tells Develop. “Contract negotiation for a fair wage was constantly prolonged or put off as a bargaining tactic, while huge promises were made and never delivered on. A lot of people were sick of the bullshit.

“The easiest part was actually getting a team together to branch out and start making a game. There was a lot of belief in Joni [Lappalainen, CEO], Hannes [Väisänen, CTO], and I. “The hardest part was asking people who we knew would have great offers to turn them down to work at a studio that was likely a gamble to begin with.” Then there was the financial risk to setting up on their own. When Dreamloop first sought funding, Stewart was working overnight as a security guard, then hurrying home for Skype calls with the team.

There needs to be more support for devs trying to retain ownership of their IP. Steve Stewart, co-founder, Dreamloop

Even with finance secured the money had to be shared around, Stewart explains: “One month, I got a cheque for €300 to help with rent, but everything else of our initial funding went to the team and the company’s needs. It hasn’t been easy on my wife, either. I know it’s hard on our team’s personal lives, but I can’t help but believe the hard work will pay off, and we’ll be able to make it right in the future.” Dreamloop as a studio was slowly building momentum, until their former employer tried to sue them. LEGAL THREATS Stewart received a inviting him to revisit his previous studio to hear a potential solution to Dreamloop’s monetary struggles. First, he was offered outsourced work. Then, the true motivation was revealed. Because Stewart and his team had pitched their game concept while working at this studio, they claimed the concept and rights to the game belonged to them.

“They were trying to take away our dream,” Stewart says. “We’d been building hype in Finnish media for our game and there were stirrings about our Kickstarter plans. When our former CEO said he’d love to hear about the project, we knew he had ties to some big publishers and the studio was doing well, so we swallowed our pride and took the meeting. “He said we were developing an IP owned by their company. He insisted they had taken ownership when we pitched the concept, and that, despite the fact that they had never bought the rights from Hannes, they owned it because the pitch with design notes and a specific name had been uploaded to their Google Drive. He then informed us of a stipulation in the contracts we had signed that said any IP we created – even in our private time – while under the employ of that company was owned by them. He said we had to change the name, or else they would sue. “He said: ’What do you want me to do? The file is on

Forward Motion: This issue of Develop is new in more ways than one. We're looking at motion capture and have interviews with all the industr...

Forward Motion: This issue of Develop is new in more ways than one. We're looking at motion capture and have interviews with all the industr...