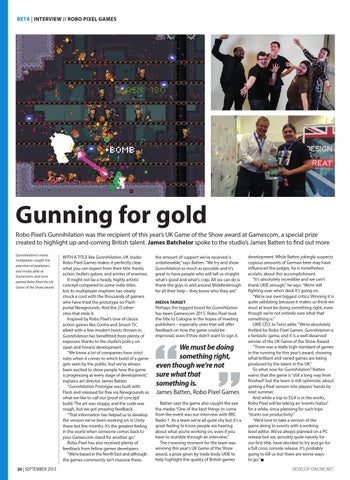 Gunning for gold Robo Pixel’s Gunnihilation was the recipient of this year’s UK Game of the Show award at Gamescom, a special prize created to highlight up-and-coming British talent. James Batchelor spoke to the studio’s James Batten to find out more Gunnihilation’s manic multiplayer caught the attention of publishers and media alike at Gamescom, and even earned Robo Pixel the UK Game of the Show award

WITH A TITLE like Gunnihilation, UK studio Robo Pixel Games makes it perfectly clear what you can expect from their title: frantic action, bullets galore, and armies of enemies. It might not be a heady, highly artistic concept compared to some indie titles, but its multiplayer mayhem has clearly struck a cord with the thousands of gamers who have tried the prototype on Flash portal Newgrounds. And the 25 other sites that stole it. Inspired by Robo Pixel’s love of classic action games like Contra and Smash TV, albeit with a few modern twists thrown in, Gunnihilation has benefitted from plenty of exposure thanks to the studio’s policy on open and honest development. “We know a lot of companies have strict rules when it comes to which build of a game gets seen by the public, but we’ve always been excited to show people how the game is progressing at every stage of development,” explains art director James Batten. “Gunnihilation Prototype was built with Flash and released for free via Newgrounds as what we like to call our ‘proof of concept’ build. The art was sloppy, and the code was rough, but we got amazing feedback. “That information has helped us to develop the version we’ve been working on in Unity these last few months. It’s the greatest feeling in the world when someone comes back to your Gamescom stand for another go.” Robo Pixel has also received plenty of feedback from fellow games developers. “We’re based in the North East and although the games community isn’t massive there,

the amount of support we’ve received is unbelievable,” says Batten. “We try and show Gunnihilation as much as possible and it’s great to have people who will tell us straight what’s good and what’s crap. All we can do is thank the guys in and around Middlesbrough for all their help – they know who they are.” MEDIA TARGET Perhaps the biggest boost for Gunnihilation has been Gamescom 2015. Robo Pixel took the title to Cologne in the hopes of meeting publishers – especially ones that will offer feedback on how the game could be improved, even if they didn’t want to sign it.

We must be doing something right, even though we’re not sure what that something is. James Batten, Robo Pixel Games Batten says the game also caught the eye the media: “One of the best things to come from the event was our interview with BBC Radio 1. As a team we’re all quite shy but it’s a great feeling to know people are hearing about what you’re working on, even if you have to stumble through an interview.” The crowning moment for the team was winning this year’s UK Game of the Show award, a prize given by trade body UKIE to help highlight the quality of British games

development. While Batten jokingly suspects copious amounts of German beer may have influenced the judges, he is nonetheless ecstatic about this accomplishment. “It’s absolutely incredible and we can’t thank UKIE enough,” he says. “We’re still fighting over who’s desk it’s going on. “We’re our own biggest critics. Winning it is quite validating because it makes us think we must at least be doing something right, even though we’re not entirely sure what that something is.” UKIE CEO Jo Twist adds: “We’re absolutely thrilled for Robo Pixel Games. Gunnihilation is a fantastic game, and it is a well-deserved winner of the UK Game of the Show Award. “There was a really high standard of games in the running for this year’s award, showing what brilliant and varied games are being produced by the talent in the UK.” So what now for Gunnihilation? Batten warns that the game is “still a long way from finished” but the team is still optimistic about getting a final version into players’ hands by next summer. And while a trip to EGX is in the works, Robo Pixel will be taking an “events hiatus” for a while, since planning for such trips “stunts our productivity”. “We’d love to take a version of the game along to events with a working level editor. We’ve always planned on a PC release but we, possibly quite naively for our first title, have decided to try and go for a full cross console release. It’s probably going to kill us but there are worse ways to go.” n DEVELOP-ONLINE.NET