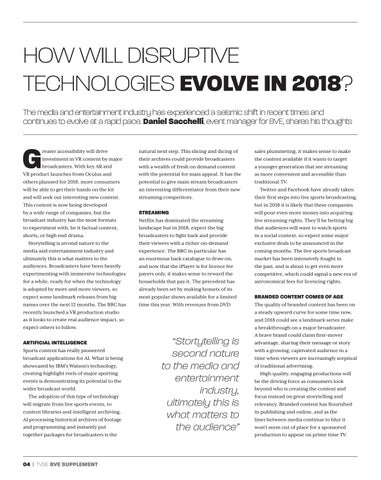 HOW WILL DISRUPTIVE TECHNOLOGIES EVOLVE IN 2018? The media and entertainment industry has experienced a seismic shift in recent times and continues to evolve at a rapid pace. Daniel Sacchelli, event manager for BVE, shares his thoughts

reater accessibility will drive investment in VR content by major broadcasters. With key AR and VR product launches from Oculus and others planned for 2018, more consumers will be able to get their hands on the kit and will seek out interesting new content. This content is now being developed by a wide range of companies, but the broadcast industry has the most formats to experiment with, be it factual content, shorts, or high end drama. Storytelling is second nature to the media and entertainment industry and ultimately this is what matters to the audiences. Broadcasters have been heavily experimenting with immersive technologies for a while, ready for when the technology is adopted by more and more viewers, so expect some landmark releases from big names over the next 12 months. The BBC has recently launched a VR production studio as it looks to create real audience impact, so expect others to follow. ARTIFICIAL INTELLIGENCE Sports content has really pioneered broadcast applications for AI. What is being showcased by IBM’s Watson’s technology, creating highlight reels of major sporting events is demonstrating its potential to the wider broadcast world. The adoption of this type of technology will migrate from live sports events, to content libraries and intelligent archiving. AI processing historical archives of footage and programming and instantly put together packages for broadcasters is the

natural next step. This slicing and dicing of their archives could provide broadcasters with a wealth of fresh on demand content with the potential for mass appeal. It has the potential to give main stream broadcasters an interesting differentiator from their new streaming competitors. STREAMING Netflix has dominated the streaming landscape but in 2018, expect the big broadcasters to fight back and provide their viewers with a richer on-demand experience. The BBC in particular has an enormous back catalogue to draw on, and now that the iPlayer is for licence fee payers only, it makes sense to reward the households that pay it. The precedent has already been set by making boxsets of its most popular shows available for a limited time this year. With revenues from DVD

“Stortytelling is second nature to the media and entertainment industry, ultimately this is what matters to the audience”

sales plummeting, it makes sense to make the content available if it wants to target a younger generation that see streaming as more convenient and accessible than traditional TV. Twitter and Facebook have already taken their first steps into live sports broadcasting, but in 2018 it is likely that these companies will pour even more money into acquiring live streaming rights. They’ll be betting big that audiences will want to watch sports in a social context, so expect some major exclusive deals to be announced in the coming months. The live sports broadcast market has been intensively fought in the past, and is about to get even more competitive, which could signal a new era of astronomical fees for licencing rights. BRANDED CONTENT COMES OF AGE The quality of branded content has been on a steady upward curve for some time now, and 2018 could see a landmark series make a breakthrough on a major broadcaster. A brave brand could claim first-mover advantage, sharing their message or story with a growing, captivated audience in a time when viewers are increasingly sceptical of traditional advertising. High quality, engaging productions will be the driving force as consumers look beyond who is creating the content and focus instead on great storytelling and relevancy. Branded content has flourished in publishing and online, and as the lines between media continue to blur it won’t seem out of place for a sponsored production to appear on prime time TV.