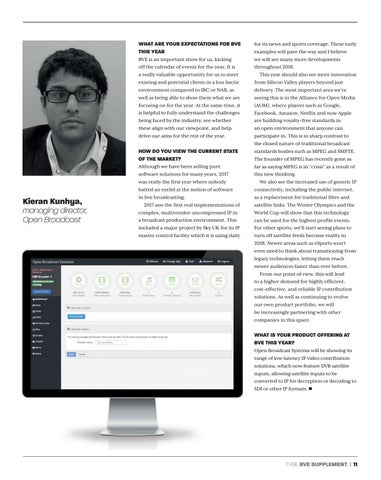 WHAT ARE YOUR EXPECTATIONS FOR BVE THIS YEAR BVE is an important show for us, kicking off the calendar of events for the year. It is a really valuable opportunity for us to meet existing and potential clients in a less hectic environment compared to IBC or NAB, as well as being able to show them what we are focusing on for the year. At the same time, it is helpful to fully understand the challenges being faced by the industry, see whether these align with our viewpoint, and help drive our aims for the rest of the year.

HOW DO YOU VIEW THE CURRENT STATE OF THE MARKET? Although we have been selling pure software solutions for many years, 2017 was really the first year where nobody batted an eyelid at the notion of software in live broadcasting. 2017 saw the first real implementations of complex, multivendor uncompressed IP in a broadcast production environment. This included a major project by Sky UK for its IP master control facility which it is using daily

for its news and sports coverage. These early examples will pave the way and I believe we will see many more developments throughout 2018. This year should also see more innovation from Silicon Valley players beyond just delivery. The most important area we’re seeing this is in the Alliance for Open Media (AOM), where players such as Google, Facebook, Amazon, Netflix and now Apple are building royalty-free standards in an open environment that anyone can participate in. This is in sharp contrast to the closed nature of traditional broadcast standards bodies such as MPEG and SMPTE. The founder of MPEG has recently gone as far as saying MPEG is in “crisis” as a result of this new thinking. We also see the increased use of generic IP connectivity, including the public internet, as a replacement for traditional fibre and satellite links. The Winter Olympics and the World Cup will show that this technology can be used for the highest profile events. For other sports, we’ll start seeing plans to turn off satellite feeds become reality in 2018. Newer areas such as eSports won’t even need to think about transitioning from legacy technologies, letting them reach newer audiences faster than ever before. From our point of view, this will lead to a higher demand for highly efficient, cost-effective, and reliable IP contribution solutions. As well as continuing to evolve our own product portfolio, we will be increasingly partnering with other companies in this space. WHAT IS YOUR PRODUCT OFFERING AT BVE THIS YEAR? Open Broadcast Systems will be showing its range of low-latency IP video contribution solutions, which now feature DVB satellite inputs, allowing satellite inputs to be converted to IP for decryption or decoding to SDI or other IP formats. n