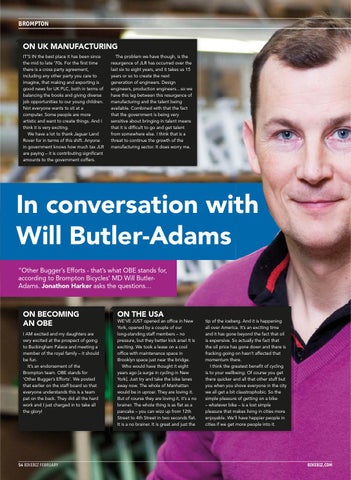 ON UK MANUFACTURING IT’S IN the best place it has been since the mid to late ‘70s. For the first time there is a cross party agreement, including any other party you care to imagine, that making and exporting is good news for UK PLC, both in terms of balancing the books and giving diverse job opportunities to our young children. Not everyone wants to sit at a computer. Some people are more artistic and want to create things. And I think it is very exciting. We have a lot to thank Jaguar Land Rover for in terms of this shift. Anyone in government knows how much tax JLR are paying – it is contributing significant amounts to the government coffers.

The problem we have though, is the resurgence of JLR has occurred over the last six to eight years, and it takes us 15 years or so to create the next generation of engineers. Design engineers, production engineers…so we have this lag between this resurgence of manufacturing and the talent being available. Combined with that the fact that the government is being very sensitive about bringing in talent means that it is difficult to go and get talent from somewhere else. I think that is a threat to continue the growth of the manufacturing sector. It does worry me.

In conversation with Will Butler-Adams “Other Bugger’s Efforts - that’s what OBE stands for, according to Brompton Bicycles’ MD Will ButlerAdams. Jonathon Harker asks the questions…

ON BECOMING AN OBE I AM excited and my daughters are very excited at the prospect of going to Buckingham Palace and meeting a member of the royal family – it should be fun. It’s an endorsement of the Brompton team. OBE stands for ‘Other Bugger’s Efforts’. We posted that earlier on the staff board so that everyone understands this is a team pat on the back. They did all the hard work and I just charged in to take all the glory!

ON THE USA WE’VE JUST opened an office in New York, opened by a couple of our long-standing staff members – no pressure, but they better kick arse! It is exciting. We took a lease on a cool office with maintenance space in Brooklyn space just near the bridge. Who would have thought it eight years ago [a surge in cycling in New York]. Just try and take the bike lanes away now. The whole of Manhattan would be in uproar. They are loving it. But of course they are loving it, it’s a no brainer. The whole thing is as flat as a pancake – you can wizz up from 12th Street to 4th Street in two seconds flat. It is a no brainer. It is great and just the

tip of the iceberg. And it is happening all over America. It’s an exciting time and it has gone beyond the fact that oil is expensive. So actually the fact that the oil price has gone down and there is fracking going on hasn’t affected that momentum there. I think the greatest benefit of cycling is to your wellbeing. Of course you get there quicker and all that other stuff but you when you shove everyone in the city we all get a bit claustrophobic. So the simple pleasure of getting on a bike – whatever bike – is a lost simple pleasure that makes living in cities more enjoyable. We’ll have happier people in cities if we get more people into it.