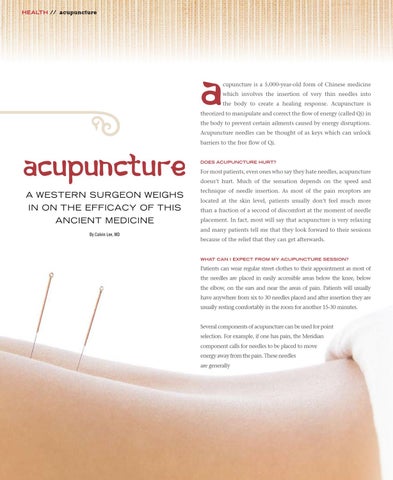 cupuncture is a 5,000-year-old form of Chinese medicine which involves the insertion of very thin needles into the body to create a healing response. Acupuncture is

theorized to manipulate and correct the flow of energy (called Qi) in the body to prevent certain ailments caused by energy disruptions. Acupuncture needles can be thought of as keys which can unlock barriers to the free flow of Qi.

Acupuncture A Western Surgeon Weighs In on the Efficacy of this Ancient Medicine By Calvin Lee, MD

For most patients, even ones who say they hate needles, acupuncture doesnâ&#x20AC;&#x2122;t hurt. Much of the sensation depends on the speed and technique of needle insertion. As most of the pain receptors are located at the skin level, patients usually donâ&#x20AC;&#x2122;t feel much more than a fraction of a second of discomfort at the moment of needle placement. In fact, most will say that acupuncture is very relaxing and many patients tell me that they look forward to their sessions because of the relief that they can get afterwards.

What can I expect from my acupuncture session?

Patients can wear regular street clothes to their appointment as most of the needles are placed in easily accessible areas below the knee, below the elbow, on the ears and near the areas of pain. Patients will usually have anywhere from six to 30 needles placed and after insertion they are usually resting comfortably in the room for another 15-30 minutes. Several components of acupuncture can be used for point selection. For example, if one has pain, the Meridian component calls for needles to be placed to move energy away from the pain. These needles are generally 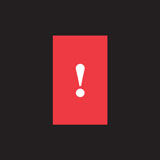 Contentment Health is a healthy lifestyle magazine designed to help you find the well-being you need and the life you want right here in Sta...

Contentment Health is a healthy lifestyle magazine designed to help you find the well-being you need and the life you want right here in Sta...