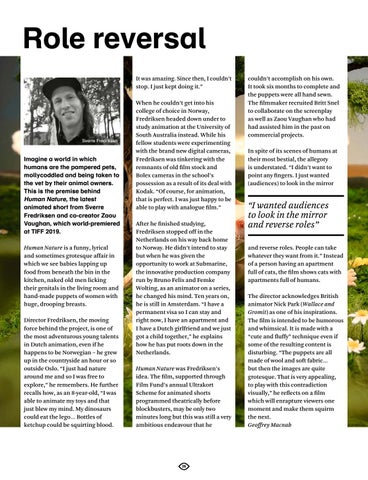 Role reversal It was amazing. Since then, I couldn’t stop. I just kept doing it.”

Imagine a world in which humans are the pampered pets, mollycoddled and being taken to the vet by their animal owners. This is the premise behind Human Nature, the latest animated short from Sverre Fredriksen and co-creator Zaou Vaughan, which world-premiered at TIFF 2019. Human Nature is a funny, lyrical and sometimes grotesque affair in which we see babies lapping up food from beneath the bin in the kitchen, naked old men licking their genitals in the living room and hand-made puppets of women with huge, drooping breasts. Director Fredriksen, the moving force behind the project, is one of the most adventurous young talents in Dutch animation, even if he happens to be Norwegian – he grew up in the countryside an hour or so outside Oslo. “I just had nature around me and so I was free to explore,” he remembers. He further recalls how, as an 8-year-old, “I was able to animate my toys and that just blew my mind. My dinosaurs could eat the lego… Bottles of ketchup could be squirting blood.

When he couldn’t get into his college of choice in Norway, Fredriksen headed down under to study animation at the University of South Australia instead. While his fellow students were experimenting with the brand new digital cameras, Fredriksen was tinkering with the remnants of old film stock and Bolex cameras in the school’s possession as a result of its deal with Kodak. “Of course, for animation, that is perfect. I was just happy to be able to play with analogue film.” After he finished studying, Fredriksen stopped off in the Netherlands on his way back home to Norway. He didn’t intend to stay but when he was given the opportunity to work at Submarine, the innovative production company run by Bruno Felix and Femke Wolting, as an animator on a series, he changed his mind. Ten years on, he is still in Amsterdam. “I have a permanent visa so I can stay and right now, I have an apartment and I have a Dutch girlfriend and we just got a child together,” he explains how he has put roots down in the Netherlands. Human Nature was Fredriksen’s idea. The film, supported through Film Fund’s annual Ultrakort Scheme for animated shorts programmed theatrically before blockbusters, may be only two minutes long but this was still a very ambitious endeavour that he

couldn’t accomplish on his own. It took six months to complete and the puppets were all hand sewn. The filmmaker recruited Britt Snel to collaborate on the screenplay as well as Zaou Vaughan who had had assisted him in the past on commercial projects. In spite of its scenes of humans at their most bestial, the allegory is understated. “I didn’t want to point any fingers. I just wanted (audiences) to look in the mirror

“I wanted audiences to look in the mirror and reverse roles” and reverse roles. People can take whatever they want from it.” Instead of a person having an apartment full of cats, the film shows cats with apartments full of humans. The director acknowledges British animator Nick Park (Wallace and Gromit) as one of his inspirations. The film is intended to be humorous and whimsical. It is made with a “cute and fluffy” technique even if some of the resulting content is disturbing. “The puppets are all made of wool and soft fabric… but then the images are quite grotesque. That is very appealing, to play with this contradiction visually,” he reflects on a film which will enrapture viewers one moment and make them squirm the next. Geoffrey Macnab