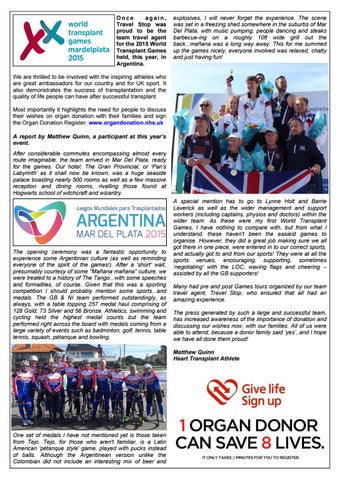 Once again, Travel Stop was proud to be the team travel agent for the 2015 World Transplant Games held, this year, in Argentina.

explosives, I will never forget the experience. The scene was set in a freezing shed somewhere in the suburbs of Mar Del Plata, with music pumping, people dancing and steaks barbecue-ing on a roughly 10ft wide grill out the back...mañana was a long way away. This for me summed up the games nicely, everyone involved was relaxed, chatty and just having fun!

We are thrilled to be involved with the inspiring athletes who are great ambassadors for our country and for UK sport. It also demonstrates the success of transplantation and the quality of life people can have after successful transplant. Most importantly it highlights the need for people to discuss their wishes on organ donation with their families and sign the Organ Donation Register. www.organdonation.nhs.uk A report by Matthew Quinn, a participant at this year’s event. After considerable commutes encompassing almost every route imaginable, the team arrived in Mar Del Plata, ready for the games. Our hotel; The Gran Provincial, or &#39;Pan&#39;s Labyrinth&#39; as it shall now be known, was a huge seaside palace boasting nearly 500 rooms as well as a few massive reception and dining rooms, rivalling those found at Hogwarts school of witchcraft and wizardry.

The opening ceremony was a fantastic opportunity to experience some Argentinian culture (as well as reminding everyone of the spirit of the games!). After a &#39;short&#39; wait, presumably courtesy of some &quot;Mañana mañana&quot; culture, we were treated to a history of The Tango...with some speeches and formalities, of course. Given that this was a sporting competition I should probably mention some sports...and medals. The GB &amp; NI team performed outstandingly, as always, with a table topping 257 medal haul comprising of 128 Gold, 73 Silver and 56 Bronze. Athletics, swimming and cycling held the highest medal counts but the team performed right across the board with medals coming from a large variety of events such as badminton, golf, tennis, table tennis, squash, pétanque and bowling.

A special mention has to go to Lynne Holt and Barrie Laverick as well as the wider management and support workers (including captains, physios and doctors) within the wider team. As these were my first World Transplant Games, I have nothing to compare with, but from what I understand, these haven&#39;t been the easiest games to organise. However, they did a great job making sure we all got there in one piece, were entered in to our correct sports, and actually got to and from our sports! They were at all the sports venues, encouraging, supporting, sometimes ‘negotiating’ with the LOC, waving flags and cheering – assisted by all the GB supporters! Many had pre and post Games tours organized by our team travel agent, Travel Stop, who ensured that all had an amazing experience. The press generated by such a large and successful team, has increased awareness of the importance of donation and discussing our wishes now, with our families. All of us were able to attend, because a donor family said ‘yes’, and I hope we have all done them proud! Matthew Quinn Heart Transplant Athlete

One set of medals I have not mentioned yet is those taken from Tejo. Tejo, for those who aren&#39;t familiar, is a Latin American &#39;pétanque style&#39; game, played with pucks instead of balls. Although the Argentinean version unlike the Colombian did not include an interesting mix of beer and 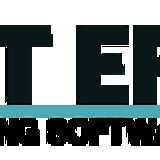