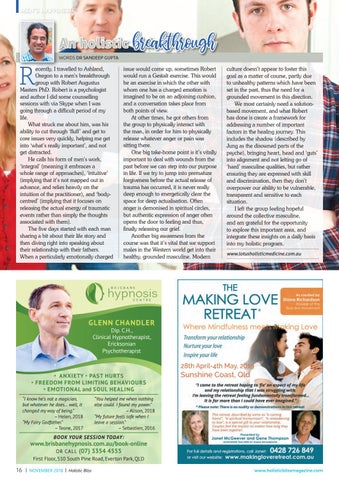 ecently, I travelled to Ashland, Oregon to a men’s breakthrough group with Robert Augustus Masters PhD. Robert is a psychologist and author I did some counselling sessions with via Skype when I was going through a difficult period of my life. What struck me about him, was his ability to cut through ‘fluff’ and get to core issues very quickly, helping me get into ‘what’s really important’, and not get distracted. He calls his form of men’s work, ‘integral’ (meaning it embraces a whole range of approaches), ‘intuitive’ (implying that it’s not mapped out in advance, and relies heavily on the intuition of the practitioner), and ‘bodycentred’ (implying that it focuses on releasing the actual energy of traumatic events rather than simply the thoughts associated with them). The five days started with each man sharing a bit about their life story and then diving right into speaking about their relationship with their fathers. When a particularly emotionally charged

issue would come up, sometimes Robert would run a Gestalt exercise. This would be an exercise in which the other with whom one has a charged emotion is imagined to be on an adjoining cushion, and a conversation takes place from both points of view. At other times, he got others from the group to physically interact with the man, in order for him to physically release whatever anger or pain was sitting there. One big take-home point is it’s vitally important to deal with wounds from the past before we can step into our purpose in life. If we try to jump into premature forgiveness before the actual release of trauma has occurred, it is never really deep enough to energetically clear the space for deep actualisation. Often anger is demonised in spiritual circles, but authentic expression of anger often opens the door to feeling and thus, finally releasing our grief. Another big awareness from the course was that it’s vital that we support males in the Western world get into their healthy, grounded masculine. Modern

culture doesn’t appear to foster this goal as a matter of course, partly due to unhealthy patterns which have been set in the past, thus the need for a grounded movement in this direction. We most certainly need a solutionbased movement, and what Robert has done is create a framework for addressing a number of important factors in the healing journey. This includes the shadow (described by Jung as the disowned parts of the psyche), bringing heart, head and ‘guts’ into alignment and not letting go of ‘hard’ masculine qualities, but rather ensuring they are expressed with skill and discrimination, then they don’t overpower our ability to be vulnerable, transparent and sensitive to each situation. I left the group feeling hopeful around the collective masculine, and am grateful for the opportunity to explore this important area, and integrate these insights on a daily basis into my holistic program. www.lotusholisticmedicine.com.au