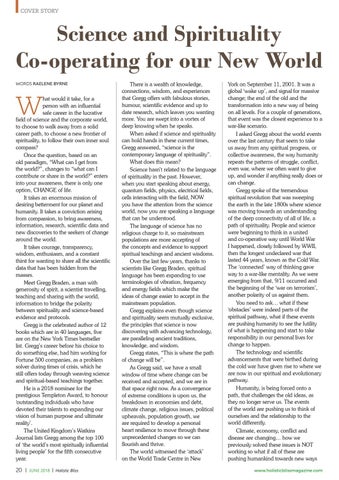 hat would it take, for a person with an influential safe career in the lucrative field of science and the corporate world, to choose to walk away from a solid career path, to choose a new frontier of spirituality, to follow their own inner soul compass? Once the question, based on an old paradigm, “What can I get from the world?”, changes to “what can I contribute or share in the world?” enters into your awareness, there is only one option, CHANGE of life. It takes an enormous mission of desiring betterment for our planet and humanity. It takes a conviction arising from compassion, to bring awareness, information, research, scientific data and new discoveries to the seekers of change around the world. It takes courage, transparency, wisdom, enthusiasm, and a constant thirst for wanting to share all the scientific data that has been hidden from the masses. Meet Gregg Braden, a man with generosity of spirit, a scientist travelling, teaching and sharing with the world, information to bridge the polarity between spirituality and science-based evidence and protocols. Gregg is the celebrated author of 12 books which are in 40 languages, five are on the New York Times bestseller list. Gregg’s career before his choice to do something else, had him working for Fortune 500 companies, as a problem solver during times of crisis, which he still offers today through weaving science and spiritual-based teachings together. He is a 2018 nominee for the prestigious Templeton Award, to honour ‘outstanding individuals who have devoted their talents to expanding our vision of human purpose and ultimate reality’. The United Kingdom’s Watkins Journal lists Gregg among the top 100 of ‘the world’s most spiritually influential living people’ for the fifth consecutive year.

There is a wealth of knowledge, connections, wisdom, and experiences that Gregg offers with fabulous stories, humour, scientific evidence and up to date research, which leaves you wanting more. You are swept into a vortex of deep knowing when he speaks. When asked if science and spirituality can hold hands in these current times, Gregg answered, “science is the contemporary language of spirituality”. What does this mean? Science hasn’t related to the language of spirituality in the past. However, when you start speaking about energy, quantum fields, physics, electrical fields, cells interacting with the field, NOW you have the attention from the science world, now you are speaking a language that can be understood. The language of science has no religious charge to it, so mainstream populations are more accepting of the concepts and evidence to support spiritual teachings and ancient wisdoms. Over the last few years, thanks to scientists like Gregg Braden, spiritual language has been expanding to use terminologies of vibration, frequency and energy fields which make the ideas of change easier to accept in the mainstream population. Gregg explains even though science and spirituality seem mutually exclusive, the principles that science is now discovering with advancing technology, are paralleling ancient traditions, knowledge, and wisdom. Gregg states, “This is where the path of change will be”. As Gregg said, we have a small window of time where change can be received and accepted, and we are in that space right now. As a convergence of extreme conditions is upon us, the breakdown in economies and debt, climate change, religious issues, political upheavals, population growth, we are required to develop a personal heart resilience to move through these unprecedented changes so we can flourish and thrive. The world witnessed the ‘attack’ on the World Trade Centre in New

York on September 11, 2001. It was a global ‘wake up’, and signal for massive change; the end of the old and the transformation into a new way of being on all levels. For a couple of generations, that event was the closest experience to a war-like scenario. I asked Gregg about the world events over the last century that seem to take us away from any spiritual progress, or collective awareness, the way humanity repeats the patterns of struggle, conflict, even war, where we often want to give up, and wonder if anything really does or can change. Gregg spoke of the tremendous spiritual revolution that was sweeping the earth in the late 1800s where science was moving towards an understanding of the deep connectivity of all of life, a path of spirituality. People and science were beginning to think in a united and co-operative way until World War I happened, closely followed by WWII, then the longest undeclared war that lasted 44 years, known as the Cold War. The ‘connected’ way of thinking gave way to a war-like mentality. As we were emerging from that, 9/11 occurred and the beginning of the ‘war on terrorism’, another polarity of us against them. You need to ask… what if these ‘obstacles’ were indeed parts of the spiritual pathway, what if these events are pushing humanity to see the futility of what is happening and start to take responsibility in our personal lives for change to happen. The technology and scientific advancements that were birthed during the cold war have given rise to where we are now in our spiritual and evolutionary pathway. Humanity, is being forced onto a path, that challenges the old ideas, as they no longer serve us. The events of the world are pushing us to think of ourselves and the relationship to the world differently. Climate, economy, conflict and disease are changing… how we previously solved these issues is NOT working so what if all of these are pushing humankind towards new ways www.holisticblissmagazine.com