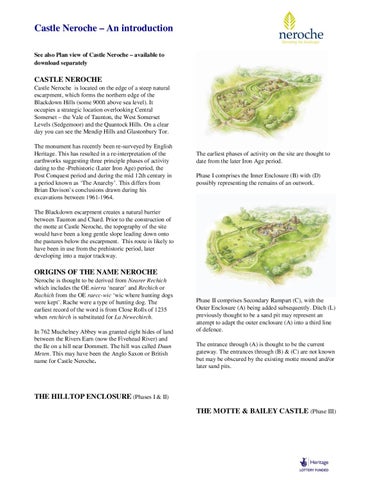 CASTLE NEROCHE Castle Neroche is located on the edge of a steep natural escarpment, which forms the northern edge of the Blackdown Hills (some 900ft above sea level). It occupies a strategic location overlooking Central Somerset – the Vale of Taunton, the West Somerset Levels (Sedgemoor) and the Quantock Hills. On a clear day you can see the Mendip Hills and Glastonbury Tor. The monument has recently been re­surveyed by English Heritage. This has resulted in a re­interpretation of the earthworks suggesting three principle phases of activity dating to the ­Prehistoric (Later Iron Age) period, the Post Conquest period and during the mid 12th century in a period known as ‘The Anarchy’. This differs from Brian Davison’s conclusions drawn during his excavations between 1961­1964.

The earliest phases of activity on the site are thought to date from the later Iron Age period. Phase I comprises the Inner Enclosure (B) with (D) possibly representing the remains of an outwork.

The Blackdown escarpment creates a natural barrier between Taunton and Chard. Prior to the construction of the motte at Castle Neroche, the topography of the site would have been a long gentle slope leading down onto the pastures below the escarpment. This route is likely to have been in use from the prehistoric period, later developing into a major trackway.

ORIGINS OF THE NAME NEROCHE

Neroche is thought to be derived from Nearer Rechich which includes the OE nierra ‘nearer’ and Rechich or Rachich from the OE raecc­wic ‘wic where hunting dogs were kept’. Rache were a type of hunting dog. The earliest record of the word is from Close Rolls of 1235 when retchirch is substituted for La Newechirch. In 762 Muchelney Abbey was granted eight hides of land between the Rivers Earn (now the Fivehead River) and the Ile on a hill near Dommett. The hill was called Duun Meten. This may have been the Anglo Saxon or British name for Castle Neroche.

Phase II comprises Secondary Rampart (C), with the Outer Enclosure (A) being added subsequently. Ditch (L) previously thought to be a sand pit may represent an attempt to adapt the outer enclosure (A) into a third line of defence. The entrance through (A) is thought to be the current gateway. The entrances through (B) &amp; (C) are not known but may be obscured by the existing motte mound and/or later sand pits.

woodland. It would have stood as a formidable reminder of who was in control. This clearly reflects the change in the role of the site from one of security and defence of a community to one where control was demonstrated by the symbolism of a powerful structure.

REFORTIFICATION OF THE MOTTE The third phase of activity relates to the immediate Post Conquest period when the motte and bailey castle was built. The castle was deliberately sited so as to make the best use of earthworks surviving from an earlier period and would have been a much more modest affair if these earlier earthworks had not been present. During this phase the Inner Enclosure (B) was reworked with construction of (E) to form an Inner Bailey (a courtyard inside the castle walls which includes an exercise area, parade ground, emergency corral and other secondary buildings) or Barbican (a gateway or outworks defending the drawbridge) and the Motte mound (F) was added. The original relationship of the Inner Bailey (E) with the Motte (F) is unclear due to later activities. A timber palisade would have been constructed along the top of the Inner Enclosure (B) encompassing the motte and bailey. The entrance to the bailey may have been gained form the eastern corner of the site (see M). The complex of features on the lower slopes of the northern escarpment is thought to include remains of building platforms and/or terraced banks. The date of these earthworks remains unknown. Castle Neroche is not mentioned in any historical documents, but archaeological excavations in the 1960s revealed that it was occupied immediately after the Norman Conquest in 1066 and was abandoned by the end of the 12th century. It was probably constructed by Robert Count of Mortain, half brother of William the Conqueror, who held some 80 manors in Somerset. His presence may have been a reaction the revolt in the South West between 1067­68. The Castle was subsequently abandoned in 1087 when Robert of Mortain moved to Montacute. Though inconspicuous today in its heyday, the motte with its timber (and latterly stone) keep would have been highly visible from the north, set within a landscape containing few large man made structures and little dense

The final phase of activity (Phase IV) occurs when the Castle is briefly refortified during the reign of Stephen and Matilda in the period called the ‘Anarchy’ (1138­ 1148). Refortifications at Castle Neroche include the construction of an upper mound on the Motte (H), a hollowed approach up the motte (J), and creation of massive motte ditch (K) which was recut from an earlier ditch. A masonry shell keep on the motte with a raised tower is also thought to have been added. It seems that the bailey was abandoned during this phase. The construction of the motte ditch (K) has removed traces of the relationship between Motte (F) and the Inner Enclosure Bailey (E).

MORE RECENT FEATURES Located at the southern end of the southern enclosure a slight N­S aligned earthwork c 10m long x 3m wide with traces of a ditch may be the remains of a pillow mound recorded on the OS maps. A warrener’s cottage is thought to be have been located on the site of Castle Neroche Farm. During the 19th century Castle Neroche Farm was constructed within the interior of the Inner Bailey (E) and Inner Enclosure (B). The farm and its buildings therefore lie within an area that is likely to contain the greatest concentration of occupation evidence.

Rev F Warre 1854 Warre mentions a number of finds including burials in timber coffins, iron arrowheads, an iron sword and pottery found in 1845. The 1886 OS 25­inch shows the position of these finds. H. St George Gray 1903 Gray excavated 7 trenches ­ one straddled all three ramparts, others were on and around the motte. He had considered the castle to be Roman or pre­Roman and was therefore surprised by pottery finds which gave a medieval date for the (motte). This lead him to suggest that the earthworks dated from the Anarchy during Stephen’s rein (mid C12th).

Davison Davison’s excavations demonstrated that the motte was a fairly late addition to the monument, being built over part of an earlier ‘ringwork’ to form a motte and bailey castle. During this same phase the remaining section of the Inner Enclosure (B) was heightened and an Inner Bailey (E) was constructed at the base of the motte. Ramparts (A) and (C) were not conclusively dated. Further reading: