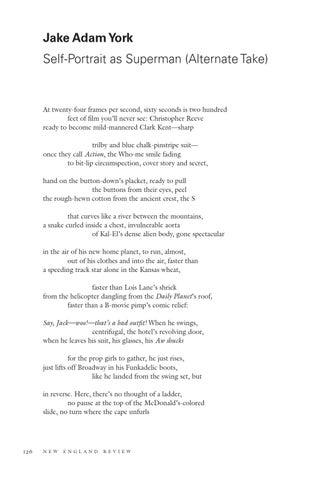 At twenty-four frames per second, sixty seconds is two hundred feet of film you’ll never see: Christopher Reeve ready to become mild-mannered Clark Kent—sharp trilby and blue chalk-pinstripe suit— once they call Action, the Who-me smile fading to bit-lip circumspection, cover story and secret, hand on the button-down’s placket, ready to pull the buttons from their eyes, peel the rough-hewn cotton from the ancient crest, the S that curves like a river between the mountains, a snake curled inside a chest, invulnerable aorta of Kal-El’s dense alien body, gone spectacular in the air of his new home planet, to run, almost, out of his clothes and into the air, faster than a speeding track star alone in the Kansas wheat, faster than Lois Lane’s shriek from the helicopter dangling from the Daily Planet’s roof, faster than a B-movie pimp’s comic relief: Say, Jack—woo!—that’s a bad outfit! When he swings, centrifugal, the hotel’s revolving door, when he leaves his suit, his glasses, his Aw shucks for the prop girls to gather, he just rises, just lifts off Broadway in his Funkadelic boots, like he landed from the swing set, but in reverse. Here, there’s no thought of a ladder, no pause at the top of the McDonald’s-colored slide, no turn where the cape unfurls

common as a hotel towel clasped with an outsized safety pin around the neck, no miraculous misremembered pause in midair when the grass darkened in the shape of a four-year-old boy who could heat-vision ants with a grandma’s magnifying glass before Tara Skinner looked out her window and gravity, in on the game, pulled him down, trying not to give anything away. He will not stand, his stained knees stomach ache green. He will not limp to the back door or hide what the doctor says must have been excruciating pain for weeks. He won’t have lain in bed, believing so plainly in the helium of Odd, the fracture just the splintering of polar ice he could feel half a globe away, seismic as the twist of the spine a physical therapist will describe. He’ll smile again as he always does, boyish and pure, the curl’s wag ready to swing free, waiting for the call that lets him arc across the sky, high over the heads of any tragic chorus, arms open to catch the screaming woman who, it seems, is hardly ever there. He’ll ease again, two hundred feet of acetate, to the ground, where they’ll curl in their questions— Who are you? What was that?—in a darkness where he can unbutton his shirt and graze cramped fingers over skin burned like a meteor in the rays of our yellow sun. 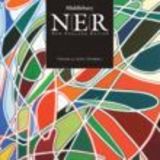