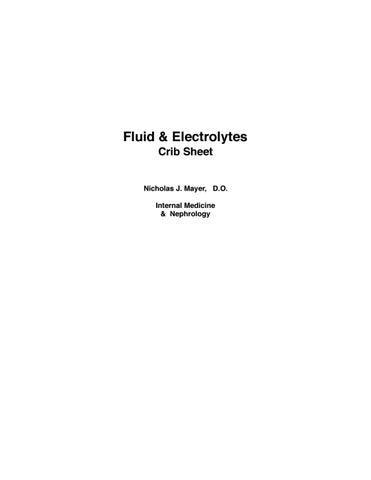 Fluid & Electrolytes Hello, I am a nephrologist who created a personal crib sheet as I studied for my Nephrology boards. These crib sheets were initially created from my overall understanding of the subject material, to which I added the evidence that supports our current practice, along with some key testing points for the boards. I have since polished them so that they are useful to the students and residents that I teach. I hope they can be useful to you, and would appreciate any feedback that you may have. Enjoy! Nicholas J. Mayer nicholas.mayer@fmc-na.com

- Water distributed Intra- & Extra- cellularly - Sodium remains in the Extra- cellular space only - If given 1 Liter of IV NS, 25% will contribute to the intravascular / plasma compartment

- Sympathetic nervous system, which has both afferent nerves from & efferent nerves to the kidney - Excess body sodium - Increased intake - Iotragenesis: NSAIDs, steroids, -glitazones, insulin - Disorders of auto-regulation - disordered function of endothelium, such as impaired release of NO - disordered function of vascular wall, such as stiffening with calcification or collagen accumulation Sodium management in the kidney results from pressure naturesis. - feedback mechanism relies on BP in the kidney, as demonstrated by the following experiments: - give aldo and MAP will ↑ to a point and level off, take aldo away and MAP ↓ to nl - put restrictor on renal artery so renal BP unchanged, and MAP will ↑ indefinitely - As MAP within kidney elevates, Na+ excretion increases BPk ≈ Na+ excretion - People with HTN have some derangement of the renal pressure naturesis curve - The production of prostanoid (PGE) is important in both volume expansion and contraction: - PGE in cortex dilates AA and encourages renin release when volume contracted - PGE in medulla maintains high rates of NaCl excretion when volume expanded - NSAIDs are clinically important as they disturb the production of prostanoid (PGE) Pressure naturesis in kidney has several potential mechanisms: - Short: RA stretch → ↑ANP → medullary DT salt loss + ↓ENaC + ↓NaK-ATPase + ↓RAAS - Intermediate: ↓RAAS system - Long: ↓SNS tone

- Potassium Shifting: - Momentary shifts in K+ are important for homeostasis in order to handle K loads with meals. - ECF contains about 70 mEq, intracellular space contains about 3500 mEq - with exercise, K leaks into interstitial space and may cause vasodilation; so ↓K may → rhabdo - Re-feeding Syndrome: ↑ glucose administration → ↑ insulin → intracellular shift of K & Phos (therefore, do not give dextrose IVF when a patient has hypokalemia)

Urine osmolality is effectively a biomarker for ADH, which cannot be measured due to it’s short half-life.

Polyurea can be related to either a water diuresis or a solute diuresis. Consider medications that would increase urine output such as diuretics or SGLT2 inhibitors Psychogenic Polydipsia with a low serum sodium + psych history. A water diuresis as is seen with Diabetes Insipidus (DI) is the urination of electrolyte free water. Free water loss (FWL)

Solutes in urine that contribute to osmolality are electrolytes (sodium & potassium) and other non-electrolyte osmoles (glucose, manitol, urea) the daily osmotic load is typically ~ 600 mOsm, but can be calculated easily The urine output is related to both the Uosm & the solute excretion rate. Both a water diuresis with DI and a solute diuresis can be present simultaneously. If a patient with DI has a Uosm is 100 mOsm / L, then ↑ solute intake would ↑ the urine volume. Example: UO would ↑ from 6 liters with 600 mOsm/day to 12 liters with 1200 mOsm/day 11

Fluid & Electrolytes Hyponatremia - Pathogenesis of Hyponatremia - Pseudohyponatremia with an increased amount of solids in plasma “diluting” serum sodium. Evaluation looks for an osmolal gap or for the true serum sodium by Direct Potentiometry. - Hyperosmolar hyponatremia: some effective osmoles pass freely between intracellular and extracellular compartments (urea, EtOH, methanol, ethylene glycol), and some do not (glucose, mannitol, glycineirrigant). Those that do not move freely translocate sodium and create a “displacement” artifact. Posm = Na x 2 + BUN / 2.8 + Gluc / 18 + EtOH / 4.6 - Non-osmotic secretion of ↑ADH due to ↑ vagal N. tone for reasons such as poor baroreceptor stim: - Hypovolemia: - Hypervolemia: - Spinal cord injury - Nausea

- Psychogenic polydipsia - Beer potomania: low salt intake means limited ability to remove water - Because so much water intake is required in the setting of a normal diet and normal renal function to become hyponatremic, there is often another etiology for hyponatremia with polydipsiainduced hyponatremia (tea-toast, anorexia, SIADH, Thiazide diuretic, fixed isosthenuria) - Hyponatremia with urine that is not maximally dilute ( Uosm > 100 ) - Thiazide

- “Cerebral salt wasting” (CSW) is primarily salt loosing with water retention. Only way to make diagnosis is clinically with volume (salt) depletion and very hard to do. - Reset osmostat: if give water, will dilute urine once reach new normal. SIADH will never dilute urine. - Consider GI or adrenal dysfunction: SIADH always has normal K & bicarb. If ↓K & alkalosis, then vomiting? If ↓K & acidosis, then laxative? If ↑K and acidosis, then adrenal insufficiency?

- If Serum Osmolality normal or high, then pseudohyponatremia: Hyperlipidemia, Dysproteinemia - If hypovolemic and Una > 30, then DDx: diuretics, or bicarbonaturia with RTA / alkalosis / low aldo - If hypervolemic and Una < 30, then DDx: nephrotic syndrome, cirrhosis or CHF - If volume status ?, give isotonic IVF: Hypovolemia will have ↑Sna & ↑Una, SIADH will ↓Sna & ↑Una

What is underlying etiology?

- Hypovolemic hyponatremia, volume expansion with NS will ↑ GFR + ↑delivery of Na and fluid to distal tubule + ↓ADH release (will correct with saline alone faster than expected) 3)

- Diagnosis: A) Check urine osmolality (Uosm): - Osmotic Diuresis = Uosm intermediate (usually 300 - 600) - Diabetes Insipidus (DI) = Uosm ≤ Posm (usually < 300) B) Water deprivation test in order to determine which type of DI ➞ Water restriction & monitor hourly Uosm. ➞ give DDAVP & monitor Uosm every 30 min for ~ 2 hours Step One: • Normal response to water deprivation is Uosm > 800, indicating ADH release and effect are intact. Step Two: • If Uosm < 800 but stable with 2+ successive hourly measurements despite rising Posm (Sna+), then DI • If Sna > 145, then DI Step Three: • If DDAVP results in ↑ Uosm & ↓ UO of > 50%, then Complete central DI (polyurea can wash out the medullary interstitial gradient, leading to a mild concentrating defect, not correctable by a single dose of DDAVP) • If DDAVP results in ↑ Uosm & ↓ UO of 15 - 50%, then Partial central DI

Hypernatremia management: - Acute management: 1) Restore Euvolemia first: with Hypovolemia, give volume expansion with isotonic fluids with Hypervolemia, give loop diuretics 2) No concern for overcorrection cJASN 2019; 14(5): 656 3) Replace FWD with PO fluids (NG), use IV D5W if cannot use gut. FWD = TBW x ( 1 - 140 / Serum Sodium ) - Diagnosis: - If hypernatremia at time of testing, then no need for water deprivation test because the patient is already water deprived. - If DI present, give DDAVP to to hyperntremic patient in order to determine if central or peripheral - Treatment of DI: Central DI: Gestational DI: Partial Central DI: Polydipsia: Lithium toxicity: Nephrogenic DI: Review of Fluids and Electrolytes for medical school students, residents and nephrology fellows.

Review of Fluids and Electrolytes for medical school students, residents and nephrology fellows.