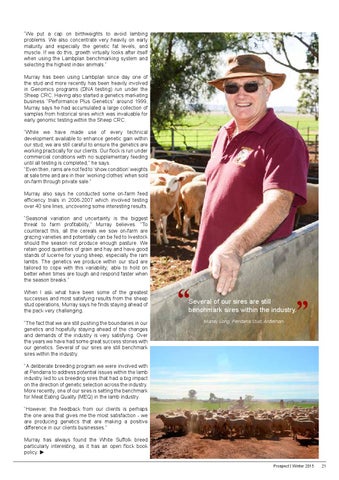 “We put a cap on birthweights to avoid lambing problems. We also concentrate very heavily on early maturity and especially the genetic fat levels, and muscle. If we do this, growth virtually looks after itself when using the Lambplan benchmarking system and selecting the highest index animals.” Murray has been using Lambplan since day one of the stud and more recently has been heavily involved in Genomics programs (DNA testing) run under the Sheep CRC. Having also started a genetics marketing business “Performance Plus Genetics” around 1999, Murray says he had accumulated a large collection of samples from historical sires which was invaluable for early genomic testing within the Sheep CRC. “While we have made use of every technical development available to enhance genetic gain within our stud, we are still careful to ensure the genetics are working practically for our clients. Our flock is run under commercial conditions with no supplementary feeding until all testing is completed,” he says. “Even then, rams are not fed to ‘show condition’ weights at sale time and are in their ‘working clothes’ when sold on-farm through private sale.” Murray also says he conducted some on-farm feed efficiency trials in 2006-2007 which involved testing over 40 sire lines, uncovering some interesting results. “Seasonal variation and uncertainty is the biggest threat to farm profitability,” Murray believes. “To counteract this, all the cereals we sow on-farm are grazing varieties and potentially can be fed to livestock should the season not produce enough pasture. We retain good quantities of grain and hay and have good stands of lucerne for young sheep, especially the ram lambs. The genetics we produce within our stud are tailored to cope with this variability; able to hold on better when times are tough and respond faster when the season breaks.” When I ask what have been some of the greatest successes and most satisfying results from the sheep stud operations, Murray says he finds staying ahead of the pack very challenging. “The fact that we are still pushing the boundaries in our genetics and hopefully staying ahead of the changes and demands of the industry is very satisfying. Over the years we have had some great success stories with our genetics. Several of our sires are still benchmark sires within the industry.

Several of our sires are still benchmark sires within the industry. Murray Long, Pendarra Stud, Ardlethan

“A deliberate breeding program we were involved with at Pendarra to address potential issues within the lamb industry led to us breeding sires that had a big impact on the direction of genetic selection across the industry. More recently, one of our sires is setting the benchmark for Meat Eating Quality (MEQ) in the lamb industry. “However, the feedback from our clients is perhaps the one area that gives me the most satisfaction - we are producing genetics that are making a positive difference in our clients businesses.” Murray has always found the White Suffolk breed particularly interesting, as it has an open flock book policy. u Prospect | Winter 2015 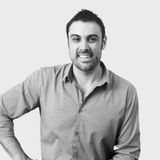