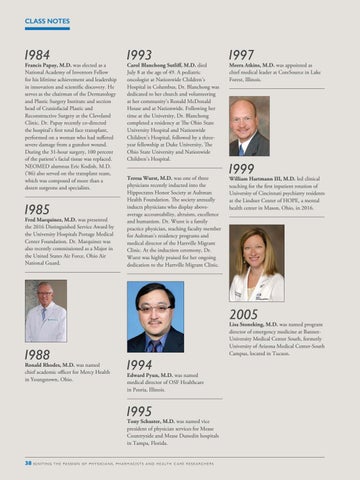 Francis Papay, M.D. was elected as a National Academy of Inventors Fellow for his lifetime achievement and leadership in innovation and scientific discovery. He serves as the chairman of the Dermatology and Plastic Surgery Institute and section head of Craniofacial Plastic and Reconstructive Surgery at the Cleveland Clinic. Dr. Papay recently co-directed the hospital’s first total face transplant, performed on a woman who had suffered severe damage from a gunshot wound. During the 31-hour surgery, 100 percent of the patient’s facial tissue was replaced. NEOMED alumnus Eric Kodish, M.D. (’86) also served on the transplant team, which was composed of more than a dozen surgeons and specialists.

Carol Blanchong Sutliff, M.D. died July 8 at the age of 49. A pediatric oncologist at Nationwide Children’s Hospital in Columbus, Dr. Blanchong was dedicated to her church and volunteering at her community’s Ronald McDonald House and at Nationwide. Following her time at the University, Dr. Blanchong completed a residency at The Ohio State University Hospital and Nationwide Children’s Hospital, followed by a threeyear fellowship at Duke University, The Ohio State University and Nationwide Children’s Hospital. Teresa Wurst, M.D. was one of three physicians recently inducted into the Hippocrates Honor Society at Aultman Health Foundation. The society annually inducts physicians who display aboveaverage accountability, altruism, excellence and humanism. Dr. Wurst is a family practice physician, teaching faculty member for Aultman’s residency programs and medical director of the Hartville Migrant Clinic. At the induction ceremony, Dr. Wurst was highly praised for her ongoing dedication to the Hartville Migrant Clinic.

William Hartmann III, M.D. led clinical teaching for the first inpatient rotation of University of Cincinnati psychiatry residents at the Lindner Center of HOPE, a mental health center in Mason, Ohio, in 2016.