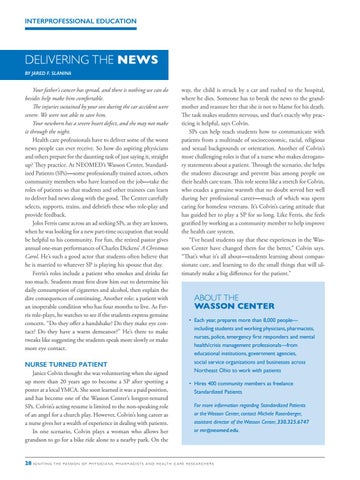 Your father’s cancer has spread, and there is nothing we can do besides help make him comfortable. The injuries sustained by your son during the car accident were severe. We were not able to save him. Your newborn has a severe heart defect, and she may not make it through the night. Health care professionals have to deliver some of the worst news people can ever receive. So how do aspiring physicians and others prepare for the daunting task of just saying it, straight up? They practice. At NEOMED’s Wasson Center, Standardized Patients (SPs)—some professionally trained actors, others community members who have learned on the job—take the roles of patients so that students and other trainees can learn to deliver bad news along with the good. The Center carefully selects, supports, trains, and debriefs these who role-play and provide feedback. John Ferris came across an ad seeking SPs, as they are known, when he was looking for a new part-time occupation that would be helpful to his community. For fun, the retired pastor gives annual one-man performances of Charles Dickens’ A Christmas Carol. He’s such a good actor that students often believe that he is married to whatever SP is playing his spouse that day. Ferris’s roles include a patient who smokes and drinks far too much. Students must first draw him out to determine his daily consumption of cigarettes and alcohol, then explain the dire consequences of continuing. Another role: a patient with an inoperable condition who has four months to live. As Ferris role-plays, he watches to see if the students express genuine concern. “Do they offer a handshake? Do they make eye contact? Do they have a warm demeanor?” He’s there to make tweaks like suggesting the students speak more slowly or make more eye contact.

NURSE TURNED PATIENT Janice Colvin thought she was volunteering when she signed up more than 20 years ago to become a SP after spotting a poster at a local YMCA. She soon learned it was a paid position, and has become one of the Wasson Center’s longest-tenured SPs. Colvin’s acting resume is limited to the non-speaking role of an angel for a church play. However, Colvin’s long career as a nurse gives her a wealth of experience in dealing with patients. In one scenario, Colvin plays a woman who allows her grandson to go for a bike ride alone to a nearby park. On the 28 I G N I T I N G

way, the child is struck by a car and rushed to the hospital, where he dies. Someone has to break the news to the grandmother and reassure her that she is not to blame for his death. The task makes students nervous, and that’s exactly why practicing is helpful, says Colvin. SPs can help teach students how to communicate with patients from a multitude of socioeconomic, racial, religious and sexual backgrounds or orientation. Another of Colvin’s more challenging roles is that of a nurse who makes derogatory statements about a patient. Through the scenario, she helps the students discourage and prevent bias among people on their health care team. This role seems like a stretch for Colvin, who exudes a genuine warmth that no doubt served her well during her professional career—much of which was spent caring for homeless veterans. It’s Colvin’s caring attitude that has guided her to play a SP for so long. Like Ferris, she feels gratified by working as a community member to help improve the health care system. “I’ve heard students say that these experiences in the Wasson Center have changed them for the better,” Colvin says. “That’s what it’s all about—students learning about compassionate care, and learning to do the small things that will ultimately make a big difference for the patient.”