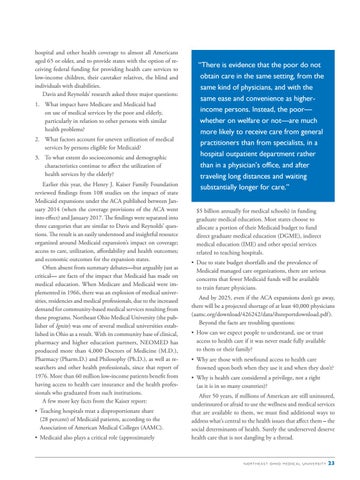 hospital and other health coverage to almost all Americans aged 65 or older, and to provide states with the option of receiving federal funding for providing health care services to low-income children, their caretaker relatives, the blind and individuals with disabilities. Davis and Reynolds’ research asked three major questions: 1. What impact have Medicare and Medicaid had on use of medical services by the poor and elderly, particularly in relation to other persons with similar health problems? 2. What factors account for uneven utilization of medical services by persons eligible for Medicaid? 3. To what extent do socioeconomic and demographic characteristics continue to affect the utilization of health services by the elderly? Earlier this year, the Henry J. Kaiser Family Foundation reviewed findings from 108 studies on the impact of state Medicaid expansions under the ACA published between January 2014 (when the coverage provisions of the ACA went into effect) and January 2017. The findings were separated into three categories that are similar to Davis and Reynolds’ questions. The result is an easily understood and insightful resource organized around Medicaid expansion’s impact on coverage; access to care, utilization, affordability and health outcomes; and economic outcomes for the expansion states. Often absent from summary debates—but arguably just as critical— are facts of the impact that Medicaid has made on medical education. When Medicare and Medicaid were implemented in 1966, there was an explosion of medical universities, residencies and medical professionals, due to the increased demand for community-based medical services resulting from these programs. Northeast Ohio Medical University (the publisher of Ignite) was one of several medical universities established in Ohio as a result. With its community base of clinical, pharmacy and higher education partners, NEOMED has produced more than 4,000 Doctors of Medicine (M.D.), Pharmacy (Pharm.D.) and Philosophy (Ph.D.), as well as researchers and other health professionals, since that report of 1976. More than 60 million low-income patients benefit from having access to health care insurance and the health professionals who graduated from such institutions. A few more key facts from the Kaiser report: • Teaching hospitals treat a disproportionate share (28 percent) of Medicaid patients, according to the Association of American Medical Colleges (AAMC). • Medicaid also plays a critical role (approximately

“There is evidence that the poor do not obtain care in the same setting, from the same kind of physicians, and with the same ease and convenience as higherincome persons. Instead, the poor— whether on welfare or not—are much more likely to receive care from general practitioners than from specialists, in a hospital outpatient department rather than in a physician’s office, and after traveling long distances and waiting substantially longer for care.” $5 billion annually for medical schools) in funding graduate medical education. Most states choose to allocate a portion of their Medicaid budget to fund direct graduate medical education (DGME), indirect medical education (IME) and other special services related to teaching hospitals. • Due to state budget shortfalls and the prevalence of Medicaid managed care organizations, there are serious concerns that fewer Medicaid funds will be available to train future physicians. And by 2025, even if the ACA expansions don’t go away, there will be a projected shortage of at least 40,000 physicians (aamc.org/download/426242/data/ihsreportdownload.pdf ). Beyond the facts are troubling questions: • How can we expect people to understand, use or trust access to health care if it was never made fully available to them or their family? • Why are those with newfound access to health care frowned upon both when they use it and when they don’t? • Why is health care considered a privilege, not a right (as it is in so many countries)? After 50 years, if millions of American are still uninsured, underinsured or afraid to use the wellness and medical services that are available to them, we must find additional ways to address what’s central to the health issues that affect them – the social determinants of health. Surely the underserved deserve health care that is not dangling by a thread.