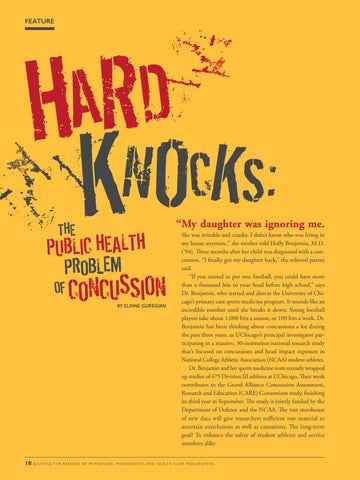 “My daughter was ignoring me.

She was irritable and cranky. I didn’t know who was living in my house anymore,’’ the mother told Holly Benjamin, M.D. (’94). Three months after her child was diagnosed with a concussion, “I finally got my daughter back,’’ the relieved parent said. “If you started in pee wee football, you could have more than a thousand hits to your head before high school,’’ says Dr. Benjamin, who started and directs the University of Chicago’s primary care sports medicine program. It sounds like an incredible number until she breaks it down: Young football players take about 1,000 hits a season, or 100 hits a week. Dr. Benjamin has been thinking about concussions a lot during the past three years, as UChicago’s principal investigator participating in a massive, 30-institution national research study that’s focused on concussions and head impact exposure in National College Athletic Association (NCAA) student athletes. Dr. Benjamin and her sports medicine team recently wrapped up studies of 475 Division III athletes at UChicago. Their work contributes to the Grand Alliance Concussion Assessment, Research and Education (CARE) Consortium study, finishing its third year in September. The study is jointly funded by the Department of Defense and the NCAA. The vast storehouse of new data will give researchers sufficient raw material to ascertain correlations as well as causations. The long-term goal? To enhance the safety of student athletes and service members alike.