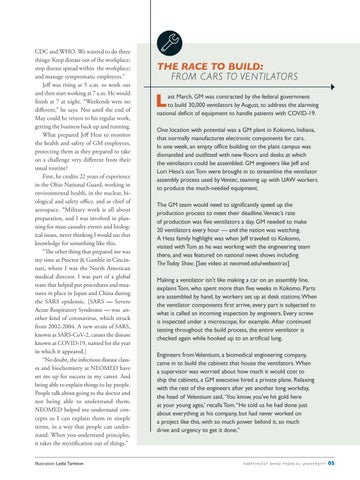 CDC and WHO. We wanted to do three things: Keep disease out of the workplace; stop disease spread within the workplace; and manage symptomatic employees.” Jeff was rising at 5 a.m. to work out and then start working at 7 a.m. He would finish at 7 at night. “Weekends were no different,” he says. Not until the end of May could he return to his regular work, getting the business back up and running. What prepared Jeff Hess to monitor the health and safety of GM employees, protecting them as they prepared to take on a challenge very different from their usual routine? First, he credits 22 years of experience in the Ohio National Guard, working in environmental health, in the nuclear, biological and safety office, and as chief of aerospace. “Military work is all about preparation, and I was involved in planning for mass casualty events and biological issues, never thinking I would use that knowledge for something like this. “The other thing that prepared me was my time at Proctor &amp; Gamble in Cincinnati, where I was the North American medical director. I was part of a global team that helped put procedures and measures in place in Japan and China during the SARS epidemic. [SARS — Severe Acute Respiratory Syndrome — was another kind of coronavirus, which struck from 2002-2004. A new strain of SARS, known as SARS-CoV-2, causes the disease known as COVID-19, named for the year in which it appeared.] “No doubt, the infectious disease classes and biochemistry at NEOMED have set me up for success in my career. And being able to explain things to lay people. People talk about going to the doctor and not being able to understand them. NEOMED helped me understand concepts so I can explain them in simple terms, in a way that people can understand. When you understand principles, it takes the mystification out of things.” Illustration: Lydia Tarleton

THE RACE TO BUILD: FROM CARS TO VENTILATORS

ast March, GM was contracted by the federal government to build 30,000 ventilators by August, to address the alarming national deﬁcit of equipment to handle patients with COVID-19. One location with potential was a GM plant in Kokomo, Indiana, that normally manufactures electronic components for cars. In one week, an empty ofﬁce building on the plant campus was dismantled and outﬁtted with new ﬂoors and desks at which the ventilators could be assembled. GM engineers like Jeff and Lori Hess’s son Tom were brought in to streamline the ventilator assembly process used by Ventec, teaming up with UAW workers to produce the much-needed equipment. The GM team would need to signiﬁcantly speed up the production process to meet their deadline.Ventec’s rate of production was ﬁve ventilators a day. GM needed to make 20 ventilators every hour — and the nation was watching. A Hess family highlight was when Jeff traveled to Kokomo, visited with Tom as he was working with the engineering team there, and was featured on national news shows including The Today Show. [See video at neomed.edu/webextras] Making a ventilator isn’t like making a car on an assembly line, explains Tom, who spent more than ﬁve weeks in Kokomo. Parts are assembled by hand, by workers set up at desk stations. When the ventilator components ﬁrst arrive, every part is subjected to what is called an incoming inspection by engineers. Every screw is inspected under a microscope, for example. After continued testing throughout the build process, the entire ventilator is checked again while hooked up to an artiﬁcial lung. Engineers from Velentium, a biomedical engineering company, came in to build the cabinets that house the ventilators. When a supervisor was worried about how much it would cost to ship the cabinets, a GM executive hired a private plane. Relaxing with the rest of the engineers after yet another long workday, the head of Velentium said, ‘You know, you’ve hit gold here at your young ages,’ recalls Tom. “He told us he had done just about everything at his company, but had never worked on a project like this, with so much power behind it, so much drive and urgency to get it done.”