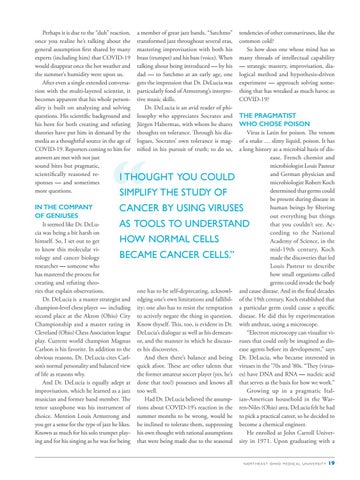 Perhaps it is due to the “duh” reaction, once you realize he’s talking about the general assumption first shared by many experts (including him) that COVID-19 would disappear once the hot weather and the summer’s humidity were upon us. After even a single extended conversation with the multi-layered scientist, it becomes apparent that his whole personality is built on analyzing and solving questions. His scientific background and his bent for both creating and refuting theories have put him in demand by the media as a thoughtful source in the age of COVID-19. Reporters coming to him for answers are met with not just sound bites but pragmatic, scientifically reasoned responses — and sometimes more questions.

a member of great jazz bands, “Satchmo” transformed jazz throughout several eras, mastering improvisation with both his brass (trumpet) and his bass (voice). When talking about being introduced — by his dad — to Satchmo at an early age, one gets the impression that Dr. DeLucia was particularly fond of Armstrong’s interpretive music skills. Dr. DeLucia is an avid reader of philosophy who appreciates Socrates and Jürgen Habermas, with whom he shares thoughts on tolerance. Through his dialogues, Socrates’ own tolerance is magnified in his pursuit of truth; to do so,

I THOUGHT YOU COULD

SIMPLIFY THE STUDY OF

IN THE COMPANY OF GENIUSES

tendencies of other coronaviruses, like the common cold? So how does one whose mind has so many threads of intellectual capability — strategic mastery, improvisation, dialogical method and hypothesis-driven experiment — approach solving something that has wreaked as much havoc as COVID-19?

THE PRAGMATIST WHO CHOSE POISON Virus is Latin for poison. The venom of a snake … slimy liquid, poison. It has a long history as a microbial basis of disease. French chemist and microbiologist Louis Pasteur and German physician and microbiologist Robert Koch determined that germs could be present during disease in human beings by filtering out everything but things that you couldn’t see. According to the National Academy of Science, in the mid-19th century, Koch made the discoveries that led Louis Pasteur to describe how small organisms called germs could invade the body and cause disease. And in the final decades of the 19th century, Koch established that a particular germ could cause a specific disease. He did this by experimentation with anthrax, using a microscope. “Electron microscopy can visualize viruses that could only be imagined as disease agents before its development,” says Dr. DeLucia, who became interested in viruses in the ’70s and ’80s. “They (viruses) have DNA and RNA — nucleic acid that serves as the basis for how we work.” Growing up in a pragmatic Italian-American household in the Warren-Niles (Ohio) area, DeLucia felt he had to pick a practical career, so he decided to become a chemical engineer. He enrolled at John Carroll University in 1971. Upon graduating with a

AS TOOLS TO UNDERSTAND

It seemed like Dr. DeLucia was being a bit harsh on himself. So, I set out to get to know this molecular virology and cancer biology researcher — someone who has mastered the process for creating and refuting theories that explain observations. Dr. DeLucia is a master strategist and champion-level chess player — including second place at the Akron (Ohio) City Championship and a master rating in Cleveland (Ohio) Chess Association league play. Current world champion Magnus Carlson is his favorite. In addition to the obvious reasons, Dr. DeLucia cites Carlson’s normal personality and balanced view of life as reasons why. And Dr. DeLucia is equally adept at improvisation, which he learned as a jazz musician and former band member. The tenor saxophone was his instrument of choice. Mention Louis Armstrong and you get a sense for the type of jazz he likes. Known as much for his solo trumpet playing and for his singing as he was for being

one has to be self-deprecating, acknowledging one’s own limitations and fallibility; one also has to resist the temptation to actively negate the thing in question. Know thyself. This, too, is evident in Dr. DeLucia’s dialogue as well as his demeanor, and the manner in which he discusses his discoveries. And then there’s balance and being quick afoot. These are other talents that the former amateur soccer player (yes, he’s done that too!) possesses and knows all too well. Had Dr. DeLucia believed the assumptions about COVID-19’s reaction in the summer months to be wrong, would he be inclined to tolerate them, suppressing his own thought with rational assumptions that were being made due to the seasonal