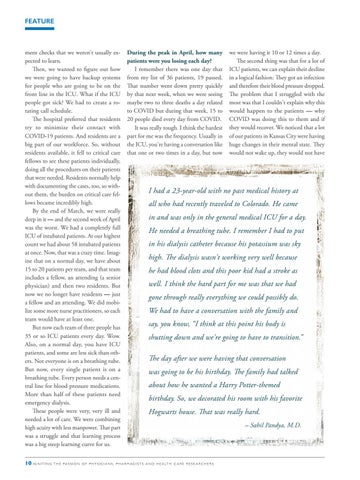 ment checks that we weren&#39;t usually expected to learn. Then, we wanted to figure out how we were going to have backup systems for people who are going to be on the front line in the ICU. What if the ICU people got sick? We had to create a rotating call schedule. The hospital preferred that residents try to minimize their contact with COVID-19 patients. And residents are a big part of our workforce. So, without residents available, it fell to critical care fellows to see these patients individually, doing all the procedures on their patients that were needed. Residents normally help with documenting the cases, too, so without them, the burden on critical care fellows became incredibly high. By the end of March, we were really deep in it — and the second week of April was the worst. We had a completely full ICU of intubated patients. At our highest count we had about 58 intubated patients at once. Now, that was a crazy time. Imagine that on a normal day, we have about 15 to 20 patients per team, and that team includes a fellow, an attending (a senior physician) and then two residents. But now we no longer have residents — just a fellow and an attending. We did mobilize some more nurse practitioners, so each team would have at least one. But now each team of three people has 35 or so ICU patients every day. Wow. Also, on a normal day, you have ICU patients, and some are less sick than others. Not everyone is on a breathing tube. But now, every single patient is on a breathing tube. Every person needs a central line for blood pressure medications. More than half of these patients need emergency dialysis. These people were very, very ill and needed a lot of care. We were combining high acuity with less manpower. That part was a struggle and that learning process was a big steep learning curve for us. 10 I G N I T I N G

During the peak in April, how many patients were you losing each day? I remember there was one day that from my list of 36 patients, 19 passed. That number went down pretty quickly by that next week, when we were seeing maybe two to three deaths a day related to COVID but during that week, 15 to 20 people died every day from COVID. It was really tough. I think the hardest part for me was the frequency. Usually in the ICU, you&#39;re having a conversation like that one or two times in a day, but now

we were having it 10 or 12 times a day. The second thing was that for a lot of ICU patients, we can explain their decline in a logical fashion: They got an infection and therefore their blood pressure dropped. The problem that I struggled with the most was that I couldn&#39;t explain why this would happen to the patients — why COVID was doing this to them and if they would recover. We noticed that a lot of our patients in Kansas City were having huge changes in their mental state. They would not wake up, they would not have

I had a 23-year-old with no past medical history at all who had recently traveled to Colorado. He came in and was only in the general medical ICU for a day. He needed a breathing tube. I remember I had to put in his dialysis catheter because his potassium was sky high. The dialysis wasn&#39;t working very well because he had blood clots and this poor kid had a stroke as well. I think the hard part for me was that we had gone through really everything we could possibly do. We had to have a conversation with the family and say, you know, “I think at this point his body is shutting down and we&#39;re going to have to transition.” The day after we were having that conversation was going to be his birthday. The family had talked about how he wanted a Harry Potter-themed birthday. So, we decorated his room with his favorite Hogwarts house. That was really hard.