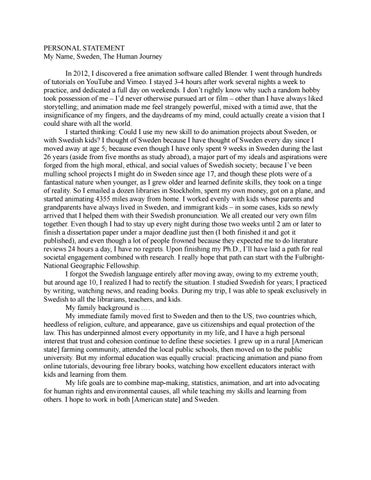 PERSONAL STATEMENT My Name, Sweden, The Human Journey In 2012, I discovered a free animation software called Blender. I went through hundreds of tutorials on YouTube and Vimeo. I stayed 3-4 hours after work several nights a week to practice, and dedicated a full day on weekends. I don’t rightly know why such a random hobby took possession of me – I’d never otherwise pursued art or film – other than I have always liked storytelling; and animation made me feel strangely powerful, mixed with a timid awe, that the insignificance of my fingers, and the daydreams of my mind, could actually create a vision that I could share with all the world. I started thinking: Could I use my new skill to do animation projects about Sweden, or with Swedish kids? I thought of Sweden because I have thought of Sweden every day since I moved away at age 5; because even though I have only spent 9 weeks in Sweden during the last 26 years (aside from five months as study abroad), a major part of my ideals and aspirations were forged from the high moral, ethical, and social values of Swedish society; because I’ve been mulling school projects I might do in Sweden since age 17, and though these plots were of a fantastical nature when younger, as I grew older and learned definite skills, they took on a tinge of reality. So I emailed a dozen libraries in Stockholm, spent my own money, got on a plane, and started animating 4355 miles away from home. I worked evenly with kids whose parents and grandparents have always lived in Sweden, and immigrant kids – in some cases, kids so newly arrived that I helped them with their Swedish pronunciation. We all created our very own film together. Even though I had to stay up every night during those two weeks until 2 am or later to finish a dissertation paper under a major deadline just then (I both finished it and got it published), and even though a lot of people frowned because they expected me to do literature reviews 24 hours a day, I have no regrets. Upon finishing my Ph.D., I’ll have laid a path for real societal engagement combined with research. I really hope that path can start with the FulbrightNational Geographic Fellowship. I forgot the Swedish language entirely after moving away, owing to my extreme youth; but around age 10, I realized I had to rectify the situation. I studied Swedish for years; I practiced by writing, watching news, and reading books. During my trip, I was able to speak exclusively in Swedish to all the librarians, teachers, and kids. My family background is …. My immediate family moved first to Sweden and then to the US, two countries which, heedless of religion, culture, and appearance, gave us citizenships and equal protection of the law. This has underpinned almost every opportunity in my life, and I have a high personal interest that trust and cohesion continue to define these societies. I grew up in a rural [American state] farming community, attended the local public schools, then moved on to the public university. But my informal education was equally crucial: practicing animation and piano from online tutorials, devouring free library books, watching how excellent educators interact with kids and learning from them. My life goals are to combine map-making, statistics, animation, and art into advocating for human rights and environmental causes, all while teaching my skills and learning from others. I hope to work in both [American state] and Sweden.

In 2012, I discovered a free animation software called Blender. I went through hundreds of tutorials on YouTube and Vimeo. I stayed 3-4 hours after work several nights a week to practice, and dedicated a full day on weekends...