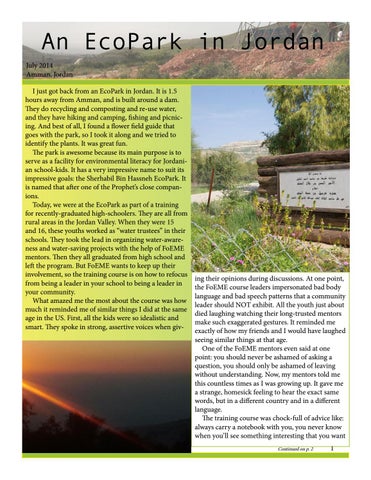 An EcoPark in Jordan July 2014 Amman, Jordan I just got back from an EcoPark in Jordan. It is 1.5 hours away from Amman, and is built around a dam. They do recycling and composting and re-use water, and they have hiking and camping, fishing and picnicing. And best of all, I found a flower field guide that goes with the park, so I took it along and we tried to identify the plants. It was great fun. The park is awesome because its main purpose is to serve as a facility for environmental literacy for Jordanian school-kids. It has a very impressive name to suit its impressive goals: the Sherhabil Bin Hassneh EcoPark. It is named that after one of the Prophet’s close companions. Today, we were at the EcoPark as part of a training for recently-graduated high-schoolers. They are all from rural areas in the Jordan Valley. When they were 15 and 16, these youths worked as “water trustees” in their schools. They took the lead in organizing water-awareness and water-saving projects with the help of FoEME mentors. Then they all graduated from high school and left the program. But FoEME wants to keep up their involvement, so the training course is on how to refocus from being a leader in your school to being a leader in your community. What amazed me the most about the course was how much it reminded me of similar things I did at the same age in the US. First, all the kids were so idealistic and smart. They spoke in strong, assertive voices when giv-

ing their opinions during discussions. At one point, the FoEME course leaders impersonated bad body language and bad speech patterns that a community leader should NOT exhibit. All the youth just about died laughing watching their long-trusted mentors make such exaggerated gestures. It reminded me exactly of how my friends and I would have laughed seeing similar things at that age. One of the FoEME mentors even said at one point: you should never be ashamed of asking a question, you should only be ashamed of leaving without understanding. Now, my mentors told me this countless times as I was growing up. It gave me a strange, homesick feeling to hear the exact same words, but in a different country and in a different language. The training course was chock-full of advice like: always carry a notebook with you, you never know when you’ll see something interesting that you want Continued on p. 2

to remember. But I think the most important parts were the discussions. We talked about the qualities - like patience, honesty, respect, morality, curiosity - that a person should nurture in order to be a good community leader. One of the FoEME mentors asked: who do you know who has these qualities, who affected your life greatly? Some of the youths said their parents, and some said King Hussein of Jordan and the Pope. And one young lady said Edgar Allan Poe! She said upon reading his short stories, their uniqueness and eeriness made her see the world in a whole different light. On the second day of the course, we broke up into groups. Each group was to create a guided nature tour through the EcoPark, highlighting its many features: the environmentally-built cabins; the different types of plants; the student-built dome where your voice gets amplified like at a Roman amphitheater; the bird-watching house built of sandfilled plastic bottles; and the beautiful dam around which the EcoPark is built, and which is said to have the cleanest water in all of Jordan. Then on the last day of the course, we acted out the guided nature tours, and all the youths had a chance to practice being an actual nature guide. As we walked towards the dam, the peaks of the hills around us glowed golden in the slanting sunset light, and our voices were lost in the gusting wind. Someone yelled out, “Run!” and away we all went tramping up the hills. It was one of the most beautiful sights I have ever seen! Amidst all the discussions of leadership and environmental advocacy, a lot of political and religious themes kept cropping up. At one point, a group of Israeli tourists showed up. I was surprised, because I didn’t even know that Israelis could get visas into Jordan, but they had actually come to practice their Arabic which they were all studying. The tourists were invited into our classroom, and everyone paired up to give the Israeli tourists a chance to practice some Arabic with the Jordanian youths! Afterwards, one of the FoEME mentors said he welcomed interactions like this, because it leaves the tourists with a strong impression. They will always remember meeting the Jordanian youths who respect and care for the environment. He went on to say that an environmental stew-

ard’s job is to welcome and teach all people, whether they are Muslim, Christian, Jewish, or Buddhist. One of the youths piped up: “we are all from one creation”. These were such uplifting words! Later that day as we ate our lunch of seasoned rice, roasted potatoes, hummus, tomatoes, yoghurt, and chicken, some of the youths asked me if I was Muslim. I told them yes. Then a girl asked, “Sunni or Shia?” and I said I never answer that question because it is so ugly and divisive these days. The boy next to me even admonished his peer: “that’s right, it’s is a rude question, why did you ask it?” Then turning to me, he continued: “But! I hope that you are Sunni! I think it’s a rude question, but in my heart I really hope you are Sunni!” We all laughed at the irony of what he was saying, but that moment really saddened me. These Jordanian youths are so bright, so smart, and so full of energy and hope. They are dedicating themselves to environmental causes. It is so disappointing that a kid with so much promise would be all hung up over Sunni-Shia-MuslimChristian, right after the morning’s discussion of “we are all one creation.” I definitely left the EcoPark with my head full of new impressions, and I hope it will continue to serve as a way to bring people together over a shared concern for the environment. An Ecopark in Jordan

I just got back from an Ecopark in Jordan. It is 1.5 hours away from Amman, and is built around a dam. They do recycling and composting and...

An Ecopark in Jordan

I just got back from an Ecopark in Jordan. It is 1.5 hours away from Amman, and is built around a dam. They do recycling and composting and...