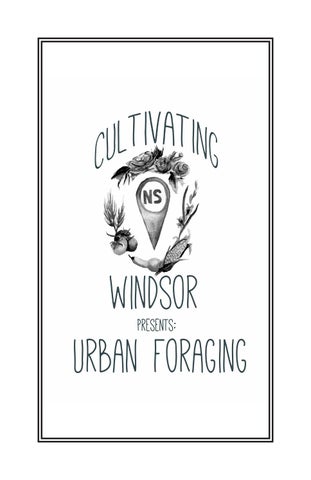 Foraging for Edibles in Downtown Windsor Thursday June 12, 2014, 6:30pm Cultivating Windsor is a project established by Neighborhood Spaces artist in residence Amanda White. This project seeks to facilitate exchanges and explorations around local knowledge about gardening, food cultivation and processing in Windsor-Essex County. Rashel Tremblay is a local farmer and forager, passionate about wild edibles. She farms with Locally Germinated, a farmer’s cooperative established in 2011 using a Community Supported Agriculture model (or CSA). Located near Tilbury, Locally Germinated provides fresh, locally-grown food to the Windsor-Essex Chatham-Kent area. For more info about the farm visit their website: http://locallygerminated.wordpress. com/ Neighbourhood Spaces is an Artist in Residence Program locating nine Canadian artists in community sites throughout Windsor and Essex County in Ontario, Canada. The program is a partnership of “the Collaborative”: Arts Council - Windsor &amp; Region (ACWR), Broken City Lab (BCL) and The City of Windsor. Supported by the Ontario Trillium Foundation, Neighbourhood Spaces embeds artists in various community sites such as parks, nature reserves, libraries, health or community centres. These sites provide a “home base” for each artist to work during their residency, while also allowing the artist to take on diverse roles, engaging with community members in various ways to animate, explore and inspire the specific stories, curiosities, challenges and triumphs of the local community. Residencies will begin in summer 2013 and be staggered throughout the year, concluding in August 2014. A final exhibition and symposium will be held in the fall of 2014 and an online publication will be created documenting the program.

about: native to most of Europe and northern and central Asia common plantain has widely naturalised elsewhere in the world. Common uses: this plant is One of the most abundant and widely distributed medicinal crops in the world! A poultice made from the leaves can be applied to wounds, stings, and sores in order to facilitate healing and prevent infection. Broadleaf Plantain is also a highly nutritious wild edible rich in calcium and vitamins A, C, and K. Preparation: The young, tender leaves can be eaten raw, and the older, stringier leaves can be boiled in stews and eaten. notes:

About: IMPORTANT- A similar plant named Menispermum canadense (common moonseed) is poisonous. Uses: The ripe grape can be eaten but tastes better after the first frost. The leaves are also edible. Preparation: They can be eaten in a salad (they have a tangy citrusy taste) or cooked, often stuffed with rice, meat and spices. NOTES:

ABOUT: LAMBS QUARTERS IS A fast-growing weedy annual plant. COMMON USES: This species is cultivated as BOTH A grain or vegetable crop (for example in lieu of spinach), as well as animal feed in Asia and Africa. Preparation: leaves and young shoots may be eaten as a leaf vegetable, either steamed in its entirety, or cooked like spinach. Each plant produces tens of thousands of black seeds. These are high in protein, vitamin A, calcium, phosphorus, and potassium. Quinoa, a closely related species, is grown specifically for its seeds. notes:

About: A non-native invasive biennial flowering plant in the Mustard family, Garlic mustard is one of the oldest PLANT spices to be used in cooking in Europe. Preparation: The chopped leaves are used for flavoring in salads and sauces such as pesto, and sometimes the flowers and fruit are included as well. These are best when young, and provide a mild flavor of both garlic and mustard. The seeds are sometimes used to season food. NOTES:

About: native to Europe and Asia, several species OF BURDOCK have been widely introduced worldwide. BURDOCK TAKES TWO YEARS TO COMPLETE ITS BIOLOGICAL LIFECYCLE. Common Uses: The taproot of young burdock plants can be harvested and eaten as a root vegetable. Immature flower stalks may also be harvested in late spring, before flowers appear; their taste CLOSELY resembles that of artichoke, to which the burdock is related. NOTES:

About: The Rose hip is the fruit of the Rose plant and is typically red-to-orange, but ranges from dark purple to black in some species.

Preparation: This drink is made by soaking the drupes in cool water, rubbing them to extract the essence, straining the liquid through a cotton cloth and sweetening it.

About: clover Is a genus of about 300 species of plants in the leguminous pea family Fabaceae. The highest diversity is found in the temperate Northern Hemisphere, but many species also occur in South America and Africa, including at high altitudes on mountains in the tropics. They are small annual, biennial, or short-lived perennial herbaceous plants. Several species are extensively cultivated as fodder (animal feed) plants.

About: Nepeta is a genus of flowering plants known commonly as catmints. The genus is native to Europe, Asia, and Africa, and has also naturalized in North America.

Uses: Some members of this group are known as catnip or catmint because of their effect on house cats.

About: also known as the Woodland Sunflower or Jerusalem Artichoke, sunchoke is a species of sunflower native to eastern North America, Common Uses: sunchoke is also cultivated widely across the temperate zone for its tuber, which is used as a root vegetable notes:

plants to forage for in Windsor

****DO NOT EAT!*** About: A perennial herbaceous plant native to Europe, North Africa and Western Asia. The foliage and berries are extremely toxic, containing tropane alkaloids. These toxins include scopolamine and hyoscyamine, which cause delirium and hallucinations. Common Uses: It has a long history of use as a medicine, cosmetic, and poison. notes:

This field guide was created for participants in a workshop organized by Amanda White, Neighbourhood Spaces artist in residence in collaboration with Rashel Tremblay of Locally Germinated CSA.