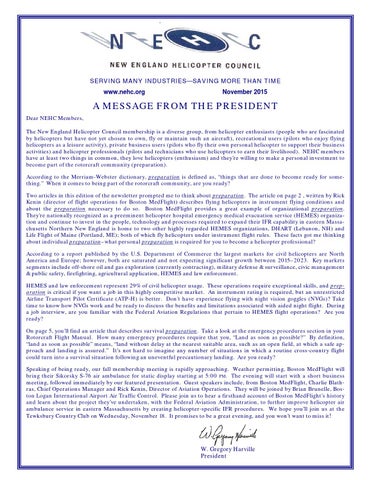 A MESSAGE FROM THE PRESIDENT Dear NEHC Members, The New England Helicopter Council membership is a diverse group, from helicopter enthusiasts (people who are fascinated by helicopters but have not yet chosen to own, fly or maintain such an aircraft), recreational users (pilots who enjoy flying helicopters as a leisure activity), private business users (pilots who fly their own personal helicopter to support their business activities) and helicopter professionals (pilots and technicians who use helicopters to earn their livelihood). NEHC members have at least two things in common, they love helicopters (enthusiasm) and they’re willing to make a personal investment to become part of the rotorcraft community (preparation). According to the Merriam-Webster dictionary, preparation is defined as, “things that are done to become ready for something.” When it comes to being part of the rotorcraft community, are you ready? Two articles in this edition of the newsletter prompted me to think about preparation. The article on page 2 , written by Rick Kenin (director of flight operations for Boston MedFlight) describes flying helicopters in instrument flying conditions and about the preparation necessary to do so. Boston MedFlight provides a great example of organizational preparation. They’re nationally recognized as a preeminent helicopter hospital emergency medical evacuation service (HEMES) organization and continue to invest in the people, technology and processes required to expand their IFR capability in eastern Massachusetts Northern New England is home to two other highly regarded HEMES organizations, DHART (Lebanon, NH) and Life Flight of Maine (Portland, ME); both of which fly helicopters under instrument flight rules. These facts got me thinking about individual preparation–what personal preparation is required for you to become a helicopter professional? According to a report published by the U.S. Department of Commerce the largest markets for civil helicopters are North America and Europe; however, both are saturated and not expecting significant growth between 2015–2023. Key markets segments include off-shore oil and gas exploration (currently contracting), military defense & surveillance, civic management & public safety, firefighting, agricultural application, HEMES and law enforcement. HEMES and law enforcement represent 29% of civil helicopter usage. These operations require exceptional skills, and preparation is critical if you want a job in this highly competitive market. An instrument rating is required, but an unrestricted Airline Transport Pilot Certificate (ATP-H) is better. Don’t have experience flying with night vision goggles (NVGs)? Take time to know how NVGs work and be ready to discuss the benefits and limitations associated with aided night flight. During a job interview, are you familiar with the Federal Aviation Regulations that pertain to HEMES flight operations? Are you ready? On page 5, you’ll find an article that describes survival preparation. Take a look at the emergency procedures section in your Rotorcraft Flight Manual. How many emergency procedures require that you, “Land as soon as possible?” By definition, “land as soon as possible” means, “land without delay at the nearest suitable area, such as an open field, at which a safe approach and landing is assured.” It’s not hard to imagine any number of situations in which a routine cross-country flight could turn into a survival situation following an uneventful precautionary landing. Are you ready? Speaking of being ready, our fall membership meeting is rapidly approaching. Weather permitting, Boston MedFlight will bring their Sikorsky S-76 air ambulance for static display starting at 5:00 PM. The evening will start with a short business meeting, followed immediately by our featured presentation. Guest speakers include, from Boston MedFlight, Charlie Blathras, Chief Operations Manager and Rick Kenin, Director of Aviation Operations. They will be joined by Brian Brunelle, Boston Logan International Airport Air Traffic Control. Please join us to hear a firsthand account of Boston MedFlight’s history and learn about the project they’ve undertaken, with the Federal Aviation Administration, to further improve helicopter air ambulance service in eastern Massachusetts by creating helicopter-specific IFR procedures. We hope you’ll join us at the Tewksbury Country Club on Wednesday, November 18. It promises to be a great evening, and you won’t want to miss it! 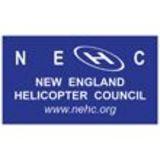