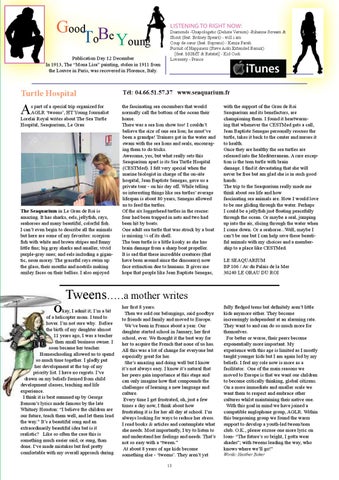 Good Be To Young Publication Day 12 December In 1913, The “Mona Lisa” painting, stolen in 1911 from the Louvre in Paris, was recovered in Florence, Italy.

The Seaquarium in Le Grau de Roi is amazing. It has sharks, eels, jellyfish, rays, seahorses and many beautiful, colorful fish. I can’t even begin to describe all the animals but here are some of my favorites: scorpion fish with white and brown stripes and funny little fins; big gray sharks and smaller, vivid purple-gray ones; and eels including a gigantic, neon moray. The graceful rays swim up the glass, their mouths and nostrils making smiley faces on their bellies. I also enjoyed

Tél: 04.66.51.57.37 www.seaquarium.fr the fascinating sea cucumbers that would normally call the bottom of the ocean their home. There was a sea lion show too! I couldn’t believe the size of one sea lion; he must’ve been a grandpa! Trainers got in the water and swam with the sea lions and seals, encouraging them to do tricks. Awesome, yes, but what really sets this Seaquarium apart is its Sea Turtle Hospital (CESTMed). I felt very special when the marine biologist in charge of the on-site hospital, Jean Baptiste Senegas, gave us a private tour - on his day off. While telling us interesting things like sea turtles’ average lifespan is about 80 years, Senegas allowed us to feed the turtles. Of the six loggerhead turtles in the rescue: four had been trapped in nets and two had been hit by boats. One adult sea turtle that was struck by a boat is missing ¼ of its shell. The teen turtle is a little kooky as she has brain damage from a sharp boat propeller. It is sad that these incredible creatures (that have been around since the dinosaurs) now face extinction due to humans. It gives me hope that people like Jean Baptiste Senegas,

with the support of the Grau de Roi Seaquarium and its benefactors, are championing them. I found it heartwarming that whenever the CESTMed gets a call, Jean Baptiste Senegas personally rescues the turtle, takes it back to the center and nurses it to health. Once they are healthy the sea turtles are released into the Mediterranean. A rare exception is the teen turtle with brain damage. I find it devastating that she will never be free but am glad she is in such good hands. The trip to the Seaquarium really made me think about sea life and how fascinating sea animals are. How I would love to be one gliding through the water. Perhaps I could be a jellyfish just floating peacefully through the ocean. Or maybe a seal, jumping up into the air, slicing through the water when I come down. Or a seahorse...Well, maybe I can’t be one but I can help save these beautiful animals with my choices and a membership to a place like CESTMed. LE SEAQUARIUM BP 106 / Av du Palais de la Mer 30240 LE GRAU DU ROI

of a helicopter mom. I tend to hover. I’m not sure why. Before the birth of my daughter almost 11 years ago, I was a teacher then small business owner. I soon became her teacher. Homeschooling allowed us to spend so much time together. I gladly put her development at the top of my priority list. I have no regrets. I’ve drawn on my beliefs formed from child development classes, teaching and life experience. I think it is best summed up by George Benson’s lyrics made famous by the late Whitney Houston: “I believe the children are our future, teach them well, and let them lead the way.” It’s a beautiful song and an extraordinarily beautiful idea but is it realistic? Like so often the case this is something much easier said, or sung, than done. I’ve made mistakes but feel pretty comfortable with my overall approach during

her first 8 years. Then we sold our belongings, said goodbye to friends and family and moved to Europe. We’ve been in France about a year. Our daughter started school in January, her first school, ever. We thought it the best way for her to acquire the French that none of us has. All this was a lot of change for everyone but especially great for her. She’s amazing and doing well but I know it’s not always easy. I know it’s natural that her peers gain importance at this stage and can only imagine how that compounds the challenges of learning a new language and culture. Every time I get frustrated, oh, just a few times a day now, I think about how frustrating it is for her all day at school. I’m always looking for ways to reduce her stress. I read books & articles and contemplate what she needs. Most importantly, I try to listen to and understand her feelings and needs. That’s not so easy with a “tween.” At about 8 years of age kids become something else - ‘tweens’. They aren’t yet 13

fully fledged teens but definitely aren’t little kids anymore either. They become increasingly independent at an alarming rate. They want to and can do so much more for themselves. For better or worse, their peers become exponentially more important. My experience with this age is limited as I mostly taught younger kids but I am again led by my beliefs. I feel my role now is more as a facilitator. One of the main reasons we moved to Europe is that we want our children to become critically thinking, global citizens. On a more immediate and smaller scale we want them to respect and embrace other cultures whilst maintaining their native one. With this goal in mind we have joined a compatible anglophone group, AGLR. Within this burgeoning group we found the warm support to develop a youth-led tween/teen club. O.K., please excuse one more lyric on loan- “The future’s so bright, I gotta wear shades”; with tweens leading the way, who knows where we’ll go!” The English Language paper for Herault in the South of France.

The English Language paper for Herault in the South of France.