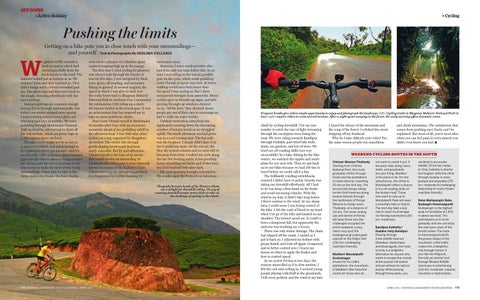 e glided swiftly towards a herd of sambar which had moved gracefully from the thick woods to the road. The animals looked just as curious as us. We watched them and they watched us. They didn’t budge until a friend swooshed past me. One giant leap and they were back in the jungle, blending effortlessly with the surroundings. Animal sightings are common enough during drives through national parks, but today’s encounter seemed more special. I wasn’t hiding behind tinted glass, nor whizzing past on a motorbike. We were pedalling through Mudumalai National Park on bicycles, attempting to climb all the way to Ooty, which sat pretty high at 2,200 metres above sea level. Though a cycle might not be as fast as a motorised vehicle, it is quick enough to be a practical way to get around—and it’s eco-friendly. I like cycling to places because I get enough time to observe things around me. In fact, just the act of climbing on my bike seems to make me more aware of my surroundings. I have time to take in the views, notice the breeze, the heat, maybe

even catch a glimpse of a Malabar giant squirrel jumping high up in the canopy. The first time I tried cycling for pleasure was when I rode through the forests of Goa for five days. I was intrigued by thick tyres, gears, off-roading, and mountain biking in general. It seemed magical, the speed at which I was able to dash over the rocky forest trail in Bhagwan Mahavir National Park in southern Goa. I remember the exhilaration I felt riding up a short 20-minute incline in the lowest gear. It was an achievement that has inspired me to take on more ambitious climbs. That’s how I found myself in Mudumalai 18 months after Goa, with an enormous mountain ahead of me, pedalling uphill in the afternoon heat. I was with nine other cyclists on a trip organised by Bangalore Ascenders. The initial ride through gently sloping forest roads had been vastly enjoyable. But by mid-afternoon, I found myself at the base of an ascent that would involve an astounding 36 hairpin bends. This route is more famously known by cyclists as the Kalhatty Climb. Characterised by its unforgiving gradient, it is frequented by cyclists training for

endurance races. However, I was a weekend rider who had done only ten trips before this. In no time I was riding on the lowest possible gear on the cycle, which made pedalling easier though progress was slow. At times, walking would have been faster than the speed I was cycling at. But I drew unexpected strength from passersby. Motor cyclists gave us thumbs-up signs, and kids peering through car windows cheered us on. “All the best,” they shouted. Some people got out of their cars to encourage us, and to refill our water bottles. Unlikely motivation came from the signboards counting down the decreasing number of hairpin bends as we struggled uphill. The harsh afternoon sun had given way to a cool evening mist. The last mile was the toughest. I simply didn’t have it in me to pedal any more. As the sun set, the blue sky turned crimson and we were still 12 km away from Ooty. I walked my cycle along the last few twisting turns. A few gruelling hours of pushing our limits and 70 km later, ten of us reached Ooty after dark. The next morning brought redemption. We would enjoy the fruits of our laborious The gentle hairpin bends of the Western Ghats are a delight for downhill riding. The joy of coasting downhill tempts most riders to take on the challenge of cycling in the Ghats.

climb by cycling downhill. I let my eyes wander to catch the rays of light streaming through the eucalyptus trees lining the road. We were riding towards Bandipur through Gudalur, past dried lake beds, dams, tea gardens, and lots of trees. We tried our off-roading skills (not very successfully) by a lake. Sitting by the blue waters, we watched the ripples and made plans for our next ride. Then we got back on to our bikes because we had 100 km to travel before we could call it a day. The brilliantly winding switchbacks ensured I didn’t have to pedal. Gravity was taking me downhill effortlessly. All I had to do was keep a firm hand on the brake and avoid oncoming vehicles. With the wind in my hair, it didn’t take long before I threw caution to the wind. At one sharp turn, I could sense I was losing control of the bike. I felt the rush of blood to my head when I let go of the bike and landed on my shoulder. The helmet saved me. It could’ve been a dangerous fall, but apparently the universe was teaching me a lesson. There was only minor damage. The chain had slipped off the crank. I smiled as I put it back on. I adjusted my helmet with greasy hands and took off again. Composed, and in better control now, I learnt my lesson on when to apply the brakes and how to control speed. As we cycled 170 km in two days, the scenery unravelled as if in slow motion. I felt the cool mist rolling in, I noticed young people playing volleyball in the grasslands, I felt every pothole and the wind in my hair.

I heard the silence of the mountain and the song of the forest. I relished the sweat dripping off my forehead. Why do I take difficult cycle rides? For the same reason people run marathons

and climb mountains. The satisfaction that comes from pushing one’s limits can’t be explained. But most of all, you’re most alive when you can feel pain in every muscle you didn’t even know you had. n

weekend cycling Routes in the south Chinnar-Munnar-Thekkady Starting from Chinnar National Park, this route gradually climbs through forest and tea plantations to reach Munnar, travelling 50 km on the first day. The second day brings rolling terrain that traverses along several hillocks through the rainforests of Periyar Reserve to finally reach Thekkady, at a distance of 110 km. The never-ending ups and downs of Kerala will keep those who like challenges occupied the entire weekend. Lucky riders may spot the endangered grizzled giant squirrel or the Niligiri tahr (150 km; challenging; road bike-friendly). Madikeri-MandalpattiKushalnagar Known for its coffee plantations, the mountains of Madikeri offer beautiful routes for those who do

not want to sweat it out. If leisurely rides along rivers, fields, and grasslands are your thing, Madikeri is the place to be. For the adventurous, the climb to Mandalpatti offers a chance to try off-roading skills on the broken road. Those who want to ride up to Mandalpetti Peak will need a mountain bike or hybrid. The next day take a lazy ride to reach Kushalnagar via Harangi backwaters (80 km; moderate). Bandipur-Kalhatty/ Gudalur-Ooty-Bandipur Passing through three wildlife reserves (Bandipur, Mudumalai, and Masinagudi), the route to Ooty is a delightful alternative for anyone who wants to escape the crowds at the popular hill station and yet witness its natural beauty. While passing through these parks, you

are likely to encounter wildlife. Of the two routes to Ooty, Kalhatty is shorter but tougher, while the climb through Gudalur is more gradual and enjoyable (170 km; moderate to challenging depending on route chosen; road bike-friendly). Belur-Mullayangiri-Baba Budangiri-Kemmangundi Mullayangiri is the highest peak in Karnataka at 1,900 m above sea level. The switchbacks on it climb gradually and one can enjoy the vast open views of the forests below. The route to Kemmangundi skirts the grassy slopes of the mountains. Little traffic makes this a delightful ride through nature. If you ride via Attigundi, the wild yet shorter trail through Bhadra Wildlife Sanctuary is entertaining (120 km; moderate; requires mountain or hybrid bike).