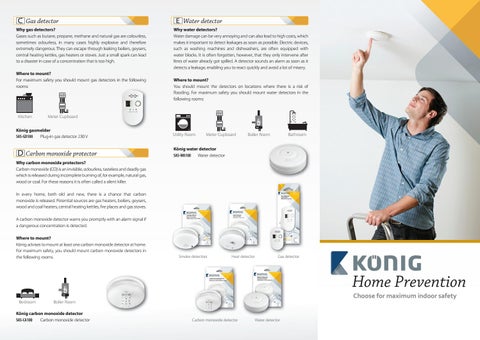 C Gas detector Why gas detectors? Gases such as butane, propane, methane and natural gas are colourless, sometimes odourless, in many cases highly explosive and therefore extremely dangerous. They can escape through leaking boilers, geysers, central heating kettles, gas heaters or stoves. Just a small spark can lead to a disaster in case of a concentration that is too high. Where to mount? For maximum safety you should mount gas detectors in the following rooms:

E Water detector Why water detectors? Water damage can be very annoying and can also lead to high costs, which makes it important to detect leakages as soon as possible. Electric devices, such as washing machines and dishwashers, are often equipped with water blocks. It is often forgotten, however, that they only intervene after litres of water already got spilled. A detector sounds an alarm as soon as it detects a leakage, enabling you to react quickly and avoid a lot of misery. Where to mount? You should mount the detectors on locations where there is a risk of ﬂooding. For maximum safety you should mount water detectors in the following rooms:

Home Prevention Safety is of major importance: everyone prefers to live in an environment in which the risk of damage to property is limited to the max. Unfortunately, taking measurements is often considered to be very expensive or hard to realise due to complicated installations. König oﬀers a broad range of Security & Safety products that enables you to instantly create an environment where you feel 100% safe. Both at home and on the road König helps you to protect yourself from both external and internal inﬂuences. Home prevention: choosing the right solution The König home prevention programme helps you to protect yourself against various indoor dangers. The assortment not only contains a number of smoke detectors but also heat, gas, carbon monoxide and water detectors. For maximum safety, it is highly important to place the right detector at the right location, which is why we would like to advise you.

Choose the appropriate detector for maximum safety in each room

Why smoke detectors? It does not take much to set your house on ﬁre and unfortunately, this can also happen at night. The causes can be very divers, such as a burning cigarette, short circuit, a forgotten candle or lightning. You won’t smell anything in your sleep, which enables poisonous gases to make you fall unconscious unnoticed. A smoke alarm warns you at the ﬁrst signs of ﬁre with a loud signal, giving you the chance to leave your home in time or take action. Where to mount? König advises you to mount at least one smoke detector on each ﬂoor. For maximum safety, you should supply the following rooms with smoke detectors:

Interconnectables Interconnectable smoke detectors are speciﬁcally suitable for larger homes and can be connected to each other. This means that if smoke is detected in one room, the other smoke detectors will also sound an alarm, which guarantees that you will always hear the devices, no matter in which room you are.

B Heat detector Why heat detectors? A smoke detector is not always the most suitable solution for every room to warn you for a ﬁre. In places where development of smoke is normal, such as kitchens, it is better to mount heat detectors, which react to temperatures that exceed 57 degrees Celsius without being inﬂuenced by smoke. You can use heat detectors as extra security and in addition to smoke detectors.

Where to mount? For maximum safety you should mount heat detectors in the following rooms: 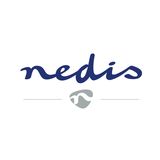