The Civil War: Conflicts Across The Country 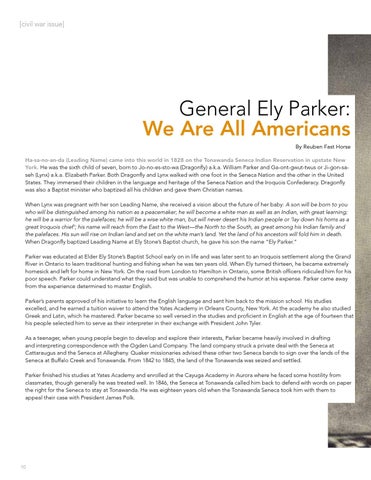 General Ely Parker: We Are All Americans By Reuben Fast Horse Ha-sa-no-an-da (Leading Name) came into this world in 1828 on the Tonawanda Seneca Indian Reservation in upstate New York. He was the sixth child of seven, born to Jo-no-es-sto-wa (Dragonfly) a.k.a. William Parker and Ga-ont-gwut-twus or Ji-gon-saseh (Lynx) a.k.a. Elizabeth Parker. Both Dragonfly and Lynx walked with one foot in the Seneca Nation and the other in the United States. They immersed their children in the language and heritage of the Seneca Nation and the Iroquois Confederacy. Dragonfly was also a Baptist minister who baptized all his children and gave them Christian names. When Lynx was pregnant with her son Leading Name, she received a vision about the future of her baby: A son will be born to you who will be distinguished among his nation as a peacemaker; he will become a white man as well as an Indian, with great learning; he will be a warrior for the palefaces; he will be a wise white man, but will never desert his Indian people or ‘lay down his horns as a great Iroquois chief’; his name will reach from the East to the West—the North to the South, as great among his Indian family and the palefaces. His sun will rise on Indian land and set on the white man’s land. Yet the land of his ancestors will fold him in death. When Dragonfly baptized Leading Name at Ely Stone’s Baptist church, he gave his son the name “Ely Parker.” Parker was educated at Elder Ely Stone’s Baptist School early on in life and was later sent to an Iroquois settlement along the Grand River in Ontario to learn traditional hunting and fishing when he was ten years old. When Ely turned thirteen, he became extremely homesick and left for home in New York. On the road from London to Hamilton in Ontario, some British officers ridiculed him for his poor speech. Parker could understand what they said but was unable to comprehend the humor at his expense. Parker came away from the experience determined to master English. Parker’s parents approved of his initiative to learn the English language and sent him back to the mission school. His studies excelled, and he earned a tuition waiver to attend the Yates Academy in Orleans County, New York. At the academy he also studied Greek and Latin, which he mastered. Parker became so well versed in the studies and proficient in English at the age of fourteen that his people selected him to serve as their interpreter in their exchange with President John Tyler. As a teenager, when young people begin to develop and explore their interests, Parker became heavily involved in drafting and interpreting correspondence with the Ogden Land Company. The land company struck a private deal with the Seneca at Cattaraugus and the Seneca at Allegheny. Quaker missionaries advised these other two Seneca bands to sign over the lands of the Seneca at Buffalo Creek and Tonawanda. From 1842 to 1845, the land of the Tonawanda was seized and settled. Parker finished his studies at Yates Academy and enrolled at the Cayuga Academy in Aurora where he faced some hostility from classmates, though generally he was treated well. In 1846, the Seneca at Tonawanda called him back to defend with words on paper the right for the Seneca to stay at Tonawanda. He was eighteen years old when the Tonawanda Seneca took him with them to appeal their case with President James Polk.

The Civil War: Conflicts Across The Country

This issue of On Second Thought features living history scholars who portrayed Frederick Douglass and Clara Barton. Other scholars portrayed Dr. William Jayne, the personal physician of President Lincoln and also the first governor of Dakota Territory; Little Crow who led the the Eastern Dakota in the ill-fated 1862 Dakota Conflict in Minnesota; and Brigadier General Ely Parker, the Seneca Indian who served in General Grant's field staff during the Civil War, Parker who wrote the surrender papers which were signed by General Lee, and Parker who served as the first Indian Commissioner of Indian Affairs. Read and share this issue that explores the Civil War in different and unexpected places across the country. 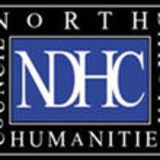