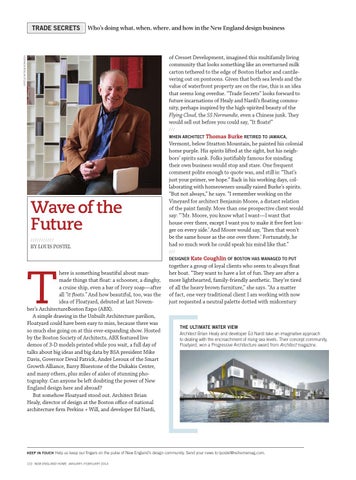 Who’s doing what, when, where, and how in the New England design business

of Cresset Development, imagined this multifamily living community that looks something like an overturned milk carton tethered to the edge of Boston Harbor and cantilevering out on pontoons. Given that both sea levels and the value of waterfront property are on the rise, this is an idea that seems long overdue. “Trade Secrets” looks forward to future incarnations of Healy and Nardi’s floating community, perhaps inspired by the high-spirited beauty of the Flying Cloud, the SS Normandie, even a Chinese junk. They would sell out before you could say, “It floats!” ///

Thomas Burke retired to Jamaica, Vermont, below Stratton Mountain, he painted his colonial home purple. His spirits lifted at the sight, but his neighbors’ spirits sank. Folks justifiably famous for minding their own business would stop and stare. One frequent comment polite enough to quote was, and still is: “That’s just your primer, we hope.” Back in his working days, collaborating with homeowners usually raised Burke’s spirits. “But not always,” he says. “I remember working on the Vineyard for architect Benjamin Moore, a distant relation of the paint family. More than one prospective client would say: “‘Mr. Moore, you know what I want—I want that house over there, except I want you to make it five feet longer on every side.’ And Moore would say, ‘Then that won’t be the same house as the one over there.’ Fortunately, he had so much work he could speak his mind like that.”

here is something beautiful about manmade things that float: a schooner, a dinghy, a cruise ship, even a bar of Ivory soap—after all “it floats.” And how beautiful, too, was the idea of Floatyard, debuted at last November’s ArchitectureBoston Expo (ABX). A simple drawing in the Unbuilt Architecture pavilion, Floatyard could have been easy to miss, because there was so much else going on at this ever-expanding show. Hosted by the Boston Society of Architects, ABX featured live demos of 3-D models printed while you wait, a full day of talks about big ideas and big data by BSA president Mike Davis, Governor Deval Patrick, André Leroux of the Smart Growth Alliance, Barry Bluestone of the Dukakis Center, and many others, plus miles of aisles of stunning photography. Can anyone be left doubting the power of New England design here and abroad? But somehow Floatyard stood out. Architect Brian Healy, director of design at the Boston office of national architecture firm Perkins + Will, and developer Ed Nardi,

Kate Coughlin of Boston has managed to put

together a group of loyal clients who seem to always float her boat. “They want to have a lot of fun. They are after a more lighthearted, family-friendly aesthetic. They’re tired of all the heavy brown furniture,” she says. “As a matter of fact, one very traditional client I am working with now just requested a neutral palette dotted with midcentury

keep in touch Help us keep our fingers on the pulse of New England’s design community. Send your news to lpostel@nehomemag.com. 122  New England Home  January–February 2014