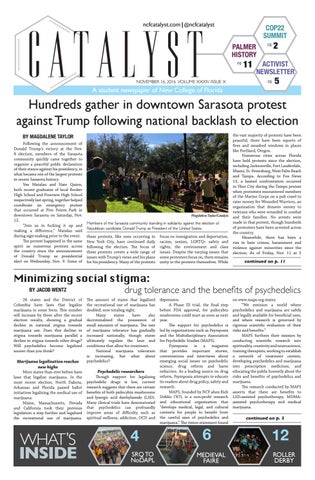 Hundreds gather in downtown Sarasota protest against Trump following national backlash to election BY MAGDALENE TAYLOR Following the announcement of Donald Trump’s victory at the Nov. 8 election, members of the Sarasota community quickly came together to organize a peaceful public declaration of their stance against his presidency, in what became one of the largest protests in recent Sarasota history. Vee Matalau and Nate Quinn, both recent graduates of local Booker High School and Pineview High School respectively last spring, together helped coordinate an emergency protest that occurred at Five Points Park in downtown Sarasota on Saturday, Nov. 12. “Join us in fucking it up and making a difference,” Matalau said during sign-making prior to the event. The protest happened in the same spirit as numerous protests across the country since the announcement of Donald Trump as presidential elect on Wednesday, Nov. 9. Some of

Members of the Sarasota community standing in solidarity against the election of Republican candidate Donald Trump as President of the United States,

these protests, like ones occurring in New York City, have continued daily following the election. The focus of these protests covers a wide range of issues with Trump’s views and his plans for his presidency. Many of the protests

focus on immigration and deportation, racism, sexism, LGBTQ+ safety and rights, the environment and class issues. Despite the varying issues that some protesters focus on, there remains unity in the protests themselves. While

the vast majority of protests have been peaceful, there have been reports of fires and smashed windows in places like Portland, Oregon. Numerous cities across Florida have held protests since the election, including Jacksonville, Fort Lauderdale, Miami, St. Petersburg, West Palm Beach and Tampa. According to Fox News 13, a heated confrontation occurred in Ybor City during the Tampa protest when protesters encountered members of the Marine Corps on a pub crawl to raise money for Wounded Warriors, an organization that donates money to veterans who were wounded in combat and their families. No arrests were made in that protest, though hundreds of protesters have been arrested across the country. Meanwhile, there has been a rise in hate crimes, harassment and violence against minorities since the election. As of Friday, Nov. 11 at 5

More states than ever before have laws that legalize marijuana. In the most recent election, North Dakota, Arkansas and Florida passed ballot initiatives legalizing the medical use of marijuana. Maine, Massachusetts, Nevada and California took their previous legislation a step further and legalized the recreational use of marijuana.

The amount of states that legalized the recreational use of marijuana has doubled, now totaling eight. Many states have also decriminalized the possession of small amounts of marijuana. The rate of marijuana tolerance has gradually increased nationally, though states ultimately regulate the laws and conditions that allow for treatment. National marijuana toleration is increasing, but what about psychedelics?

Though support for legalizing psychedelic drugs is low, current research suggests that there are certain benefits of both psilocybin mushrooms and lysergic acid diethylamide (LSD). Many clinical trials have demonstrated that psychedelics can profoundly improve areas of difficulty such as spiritual wellness, addiction, OCD and

depression. A Phase III trial, the final step before FDA approval, for psilocybin mushrooms could start as soon as next year. The support for psychedelics is led by organizations such as Psymposia and the Multidisciplinary Association for Psychedelic Studies (MAPS). Pysmposia is a magazine that provides important stories, conversations and interviews about emerging social issues on psychedelic science, drug reform and harm reduction. As a leading source on drug reform, Psymposia attempts to educate its readers about drug policy, safety and research. MAPS, founded by NCF alum Rick Doblin (’87), is a non-profit research and educational organization that “develops medical, legal, and cultural contexts for people to benefit from the careful uses of psychedelics and marijuana.” The vision statement found

on www.maps.org states: “We envision a world where psychedelics and marijuana are safely and legally available for beneficial uses, and where research is governed by rigorous scientific evaluation of their risks and benefits.” MAPS furthers their mission by conducting scientific research into spirituality, creativity and neuroscience, training therapists, working to establish a network of treatment centers, developing psychedelics and marijuana into prescription medicines, and educating the public honestly about the risks and benefits of psychedelics and marijuana. The research conducted by MAPS asserts that there are benefits to LSD-assisted psychotherapy, MDMAassisted psychotherapy and medical marijuana.