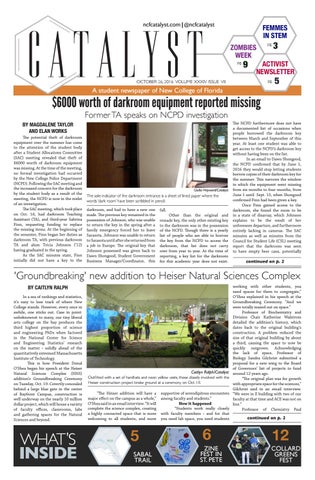 $6000 worth of darkroom equipment reported missing BY MAGDALENE TAYLOR AND ELAN WORKS The potential theft of darkroom equipment over the summer has come to the attention of the student body after a Student Allocations Committee (SAC) meeting revealed that theft of $6000 worth of darkroom equipment was missing. At the time of the meeting, no formal investigation had occurred by the New College Police Department (NCPD). Following the SAC meeting and the increased concern for the darkroom by the student body as a result of the meeting, the NCPD is now in the midst of an investigation. The SAC meeting, which took place on Oct. 16, had darkroom Teaching Assistant (TA), and third-year Sabrina Finn, requesting funding to replace the missing items. At the beginning of the semester, Finn began her duties as darkroom TA, with previous darkroom TA and alum Tricia Johnson (‘12) having graduated in the spring. As the SAC minutes state, Finn initially did not have a key to the

The sole indicator of the darkroom entrance is a sheet of lined paper where the words ‘dark room’ have been scribbled in pencil.

darkroom, and had to have a new one made. The previous key remained in the possession of Johnson, who was unable to return the key in the spring after a family emergency forced her to leave Sarasota. Johnson was unable to return to Sarasota until after she returned from a job in Europe. The original key that Johnson possessed was given back to Dawn Shongood, Student Government Business Manager/Coordinator, this

fall. Other than the original and remade key, the only other existing key to the darkroom was in the possession of the NCPD. Though there is a yearly list of people who are able to borrow the key from the NCPD to access the darkroom, that list does not carry over from year to year. At the time of reporting, a key list for the darkroom for this academic year does not exist.

The NCPD furthermore does not have a documented list of occasions when people borrowed the darkroom key between March and September of this year. At least one student was able to get access to the NCPD’s darkroom key without having been on the list. In an email to Dawn Shongood, the NCPD confirmed that by June 1, 2016 they would stop letting students borrow copies of their darkroom key for the summer. This narrows the window in which the equipment went missing from six months to four months, from June 1 until Sept. 15, when Shongood confirmed Finn had been given a key. Once Finn gained access to the darkroom, she found the room to be in a state of disarray, which Johnson explains to be the result of her unforeseen departure, and furthermore entirely lacking in cameras. The SAC minutes as well as minutes from the Council for Student Life (CSL) meeting report that the darkroom was seen to have empty beer cans, potentially

&#39;Groundbreaking&#39; new addition to Heiser Natural Sciences Complex BY CAITLYN RALPH In a sea of rankings and statistics, it’s easy to lose track of where New College stands. However, every once in awhile, one sticks out. Case in point: unbeknownst to many, our tiny liberal arts college on the bay produces the third highest proportion of science and engineering PhDs when factored in the National Center for Science and Engineering Statistics’ research on the matter - solidly ahead of the quantitatively esteemed Massachusetts Institute of Technology. This is how President Donal O’Shea began his speech at the Heiser Natural Sciences Complex (HNS) addition’s Groundbreaking Ceremony on Tuesday, Oct. 19. Covertly concealed behind a large blue gate in the center of Bayfront Campus, construction is well underway on the nearly 10 million dollar project, which will house a variety of faculty offices, classrooms, labs and gathering spaces for the Natural Sciences and beyond.

Outfitted with a set of hardhats and neon yellow vests, those closely involved with the Heiser construction project broke ground at a ceremony on Oct. 18.

“The Heiser addition will have a major effect on the campus as a whole,” O’Shea said in an email interview. “It will complete the science complex, creating a highly connected space that is more welcoming to all students, and more

supportive of serendipitous encounters among faculty and students.” How it happened “Students work really closely with faculty members - and for that you need lab space, you need students

working with other students, you need spaces for them to congregate,” O’Shea explained in his speech at the Groundbreaking Ceremony. “And we were totally maxed out on space.” Professor of Biochemistry and Division Chair Katherine Walstrom detailed the addition’s history, which dates back to the original building’s construction. A problem reduced the size of that original building by about a third, causing the space to now be quickly outgrown. Acknowledging the lack of space, Professor of Biology Sandra Gilchrist submitted a proposal for a new wing to the Board of Governors’ list of projects to fund around 12 years ago. “The original plan was for growth with appropriate space for the sciences,” Gilchrist said in an email interview. “We were in E building with two of our faculty at that time and ACE was not on line.​” Professor of Chemistry Paul