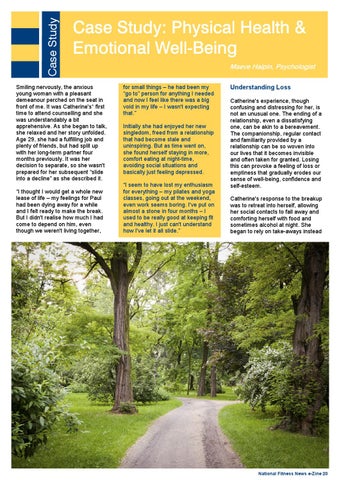 Case Study Smiling nervously, the anxious young woman with a pleasant demeanour perched on the seat in front of me. It was Catherine's* first time to attend counselling and she was understandably a bit apprehensive. As she began to talk, she relaxed and her story unfolded. Age 29, she had a fulfilling job and plenty of friends, but had split up with her long-term partner four months previously. It was her decision to separate, so she wasn't prepared for her subsequent “slide into a decline” as she described it. “I thought I would get a whole new lease of life – my feelings for Paul had been dying away for a while and I felt ready to make the break. But I didn't realise how much I had come to depend on him, even though we weren't living together,

for small things – he had been my “go to” person for anything I needed and now I feel like there was a big void in my life – I wasn't expecting that.” Initially she had enjoyed her new singledom, freed from a relationship that had become stale and uninspiring. But as time went on, she found herself staying in more, comfort eating at night-time, avoiding social situations and basically just feeling depressed. “I seem to have lost my enthusiasm for everything – my pilates and yoga classes, going out at the weekend, even work seems boring. I've put on almost a stone in four months – I used to be really good at keeping fit and healthy. I just can't understand how I've let it all slide.”

Understanding Loss Catherine's experience, though confusing and distressing for her, is not an unusual one. The ending of a relationship, even a dissatisfying one, can be akin to a bereavement. The companionship, regular contact and familiarity provided by a relationship can be so woven into our lives that it becomes invisible and often taken for granted. Losing this can provoke a feeling of loss or emptiness that gradually erodes our sense of well-being, confidence and self-esteem. Catherine's response to the breakup was to retreat into herself, allowing her social contacts to fall away and comforting herself with food and sometimes alcohol at night. She began to rely on take-aways instead 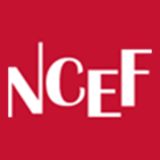 The publication aims to highlight the most up to date research on the industry and to provide the fitness professional with new advice on ho...

The publication aims to highlight the most up to date research on the industry and to provide the fitness professional with new advice on ho...