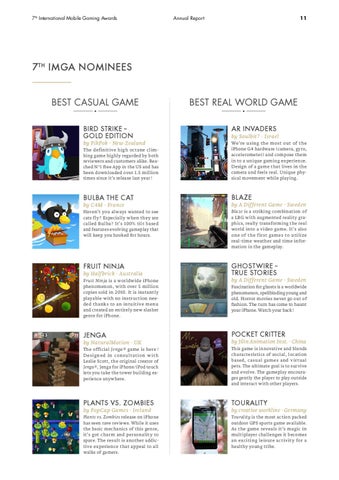 The definitive high octane climbing game highly regarded by both reviewers and customers alike. Reached N°1 free App in the US and has been downloaded over 1.5 million times since it’s release last year !

We’re using the most out of the iPhone G4 hardware (camera, gyro, accelerometer) and compose them in to a unique gaming experience. Design of a game that lives in the camera and feels real. Unique physical movement while playing.

Haven’t you always wanted to see cats fly? Especially when they are called Bulba? It’s 100% tilt based and features evolving gameplay that will keep you hooked for hours.

Blaze is a striking combination of a LBG with augmented reality graphics, really transforming the real world into a video game. It’s also one of the first games to utilize real-time weather and time information in the gameplay.

by A Different Game - Sweden

Fruit Ninja is a worldwide iPhone phenomenon, with over 5 million copies sold in 2010. It is instantly playable with no instruction needed thanks to an intuitive menu and created an entirely new slasher genre for iPhone.

by A Different Game - Sweden

Fascination for ghosts is a worldwide phenomenon, spellbinding young and old. Horror movies never go out of fashion. The turn has come to haunt your iPhone. Watch your back !

This game is innovative and blends characteristics of social, location based, casual games and v ir tual pets. The ultimate goal is to survive and evolve. The gameplay encourages gently the player to play outside and interact with other players.

Plants vs. Zombies release on iPhone has seen rave reviews. While it uses the basic mechanics of this genre, it’s got charm and personality to spare. The result is another addictive experience that appeal to all walks of gamers.

Tourality is the most action packed outdoor GPS sports game available. As the game reveals it’s magic in multiplayer challenges it becomes an exciting leisure activity for a healthy young tribe. 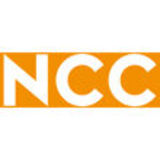 The International Mobile Gaming Awards, launched in 2004, is the largest competition for mobile games in the world. This Annual Report pres...

The International Mobile Gaming Awards, launched in 2004, is the largest competition for mobile games in the world. This Annual Report pres...