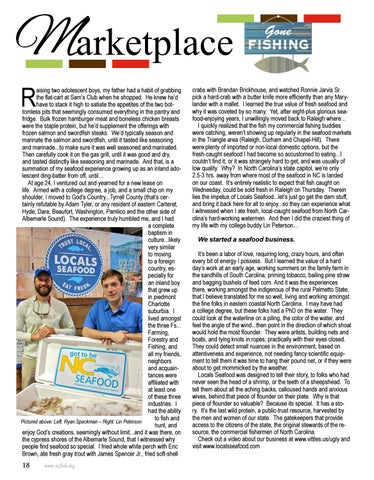 aising two adolescent boys, my father had a habit of grabbing the flat-cart at Sam’s Club when he shopped. He knew he’d have to stack it high to satiate the appetites of the two bottomless pits that seemingly consumed everything in the pantry and fridge. Bulk frozen hamburger meat and boneless chicken breasts were the staple protein, but he’d supplement the offerings with frozen salmon and swordfish steaks. We’d typically season and marinate the salmon and swordfish, until it tasted like seasoning and marinade...to make sure it was well seasoned and marinated. Then carefully cook it on the gas grill, until it was good and dry, and tasted distinctly like seasoning and marinade. And that, is a summation of my seafood experience growing up as an inland adolescent ding-batter from off, until… At age 24, I ventured out and yearned for a new lease on life. Armed with a college degree, a job, and a small chip on my shoulder, I moved to God’s Country...Tyrrell County (that’s certainly refutable by Adam Tyler, or any resident of eastern Carteret, Hyde, Dare, Beaufort, Washington, Pamlico and the other side of Albemarle Sound). The experience truly humbled me, and I had a complete baptism in culture...likely very similar to moving to a foreign country, especially for an inland boy that grew up in piedmont Charlotte suburbia. I lived amongst the three Fs... Farming, Forestry and Fishing, and all my friends, neighbors and acquaintances were affiliated with at least one of these three industries. I had the ability to fish and Pictured above: Left: Ryan Speckman – Right: Lin Peterson hunt, and enjoy God’s creations, seemingly without limit...and it was there, on the cypress shores of the Albemarle Sound, that I witnessed why people find seafood so special. I fried whole white perch with Eric Brown, ate fresh gray trout with James Spencer Jr., fried soft-shell 18

crabs with Brandan Brickhouse, and watched Ronnie Jarvis Sr. pick a hard-crab with a butter knife more efficiently than any Marylander with a mallet. I learned the true value of fresh seafood and why it was coveted by so many. Yet, after eight-plus glorious seafood-enjoying years, I unwillingly moved back to Raleigh where… I quickly realized that the fish my commercial fishing buddies were catching, weren’t showing up regularly in the seafood markets in the Triangle area (Raleigh, Durham and Chapel-Hill). There were plenty of imported or non-local domestic options, but the fresh-caught seafood I had become so accustomed to eating...I couldn’t find it, or it was strangely hard to get, and was usually of low quality. Why? In North Carolina’s state capitol, we’re only 2.5-3 hrs. away from where most of the seafood in NC is landed on our coast. It’s entirely realistic to expect that fish caught on Wednesday, could be sold fresh in Raleigh on Thursday. Therein lies the impetus of Locals Seafood...let’s just go get the darn stuff, and bring it back here for all to enjoy...so they can experience what I witnessed when I ate fresh, local-caught seafood from North Carolina’s hard-working watermen. And then I did the craziest thing of my life with my college buddy Lin Peterson… We started a seafood business. It’s been a labor of love, requiring long, crazy hours, and often every bit of energy I possess. But I learned the value of a hard day’s work at an early age, working summers on the family farm in the sandhills of South Carolina, priming tobacco, bailing pine straw and bagging bushels of feed corn. And it was the experiences there, working amongst the indigenous of the rural Palmetto State, that I believe translated for me so well, living and working amongst the fine folks in eastern coastal North Carolina. I may have had a college degree, but these folks had a PhD on the water. They could look at the waterline on a piling, the color of the water, and feel the angle of the wind...then point in the direction of which shoal would hold the most flounder. They were artists, building nets and boats, and tying knots in ropes, practically with their eyes closed. They could detect small nuances in the environment, based on attentiveness and experience, not needing fancy scientific equipment to tell them it was time to hang their pound net, or if they were about to get mommicked by the weather. Locals Seafood was designed to tell their story, to folks who had never seen the head of a shrimp, or the teeth of a sheepshead. To tell them about all the aching backs, calloused hands and anxious wives, behind that piece of flounder on their plate. Why is that piece of flounder so valuable? Because its special. It has a story. It’s the last wild protein, a public-trust resource, harvested by the men and women of our state. The gatekeepers that provide access to the citizens of the state, the original stewards of the resource, the commercial fishermen of North Carolina. Check out a video about our business at www.vittles.us/ugly and visit www.localsseafood.com 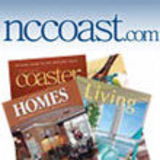