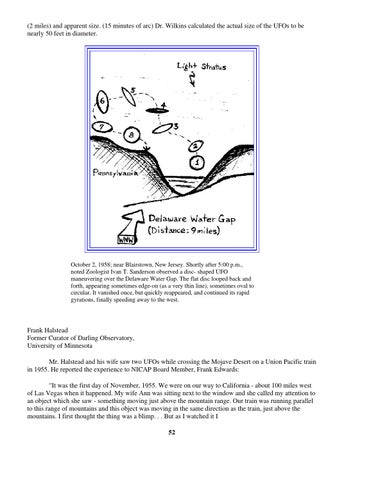 (2 miles) and apparent size. (15 minutes of arc) Dr. Wilkins calculated the actual size of the UFOs to be nearly 50 feet in diameter.

October 2, 1958; near Blairstown, New Jersey. Shortly after 5:00 p.m., noted Zoologist Ivan T. Sanderson observed a disc- shaped UFO maneuvering over the Delaware Water Gap. The flat disc looped back and forth, appearing sometimes edge-on (as a very thin line), sometimes oval to circular. It vanished once, but quickly reappeared, and continued its rapid gyrations, finally speeding away to the west.

Frank Halstead Former Curator of Darling Observatory, University of Minnesota Mr. Halstead and his wife saw two UFOs while crossing the Mojave Desert on a Union Pacific train in 1955. He reported the experience to NICAP Board Member, Frank Edwards: "It was the first day of November, 1955. We were on our way to California - about 100 miles west of Las Vegas when it happened. My wife Ann was sitting next to the window and she called my attention to an object which she saw - something moving just above the mountain range. Our train was running parallel to this range of mountains and this object was moving in the same direction as the train, just above the mountains. I first thought the thing was a blimp. . . But as I watched it I 52 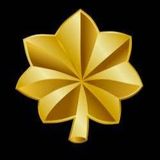