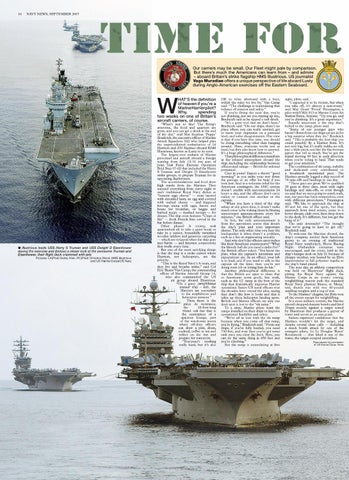 Our carriers may be small. Our Fleet might pale by comparison. But there's much the Americans can learn from and admire aboard Britain’s strike flagship HMS Illustrious.US journalist Vago Muradian offers a unique perspective of lifeaboard Lusty during Anglo-American exercises off the Eastern Seaboard. -

HAT’S the definition OK to relax afterward with a beer, within the rules we live by," Van Camp of heaven if you’re a said. "The challenge is maintaining that Marine Harrierpilot? balance of mission and safety."

aircraft carriers, of course. “\‘(v’hat’s not to like? The flying’s

awesome, the food and quarters are great, and you can get a drink at the end

said Maj Stephan ‘Poppy' Bradicich, the executiv officer ofMarine Attack Squadron 542 who helped plan the unprecedented embarkation of I6 Harriers and 200 Marines aboard HMS Illustrious, known as Lusty to its crew. The Iargest—ever embark of Marine personnel and aircraft aboard :1 foreign warship from July l5—3l was part of Joint Task Force Exercise Operation Bold Step 07-02 that included the Harry S Truman and Dwight D Eisenhower strike groups, to prepare Truman for its of the

The accommodations and food drew high marks from the Marines. They enjoyed everything from curry night to such traditional Royal Navy dishes as

with shredded ham, an egg and covered with melted cheese and kippered herrings along with eggs, bacon and beans for breakfast, or haggis and for bashed neeps mashed turnips dinner. The ship even features “Chips at Six" fresh French fries served in the bar before dinner. Other pluses? A roomy, teak quarterdeck aft to take a quiet break or take in a sunset, beautifully varnished wooden ladders and generous carpeting which are stripped when the ship goes into battle and Internet connectivity that works every time. But one of the most satisfying things is that the ship is a strike carrier where Harriers, not helicopters. are the —~—

“This is the Royal l\'avy‘s A team, and t.hey live and breathe strike,” said Col Eric ‘Beans‘\/‘an Camp, the commanding officcr of Niarinc Aircraft Group 14, who also commanded the US air group aboard Illustrious. “On a gator (amphibious assault Ship Ed), the Harriers are secondary and | to the amphibious helicopter mission." ._ Then there is the piece de resistance, the 20-foot-long blond oak bar that is the centerpiece of a spacious lounge, part —

of the wardroom annex where off—duty officers can draw a pint, dram,

cocktail, coffee or tea and reflect on the day and prepare for tomorrow.

you’re flying the next day, you're not drinking, nor are you staying up late, Bradicich said as he sipped a soft drink. “It’s a great tool that we don't have," Bradicich said. “On our ships, there's no place where you can really unwind, get to know your shipmates on a personal level, and solve disagreements. Our view If

is that if you have free time, you should be doing something other than hanging around. Here, everyone works just as hard, but they also know how to unwind. It’s a huge philosophicaldifference."

Thatphilosophicaldifferencemanifests in the relaxed atmosphere aboard the ship, including the relationship between officers and ratings British for enlisted personnel. Case in point? Expect a cheery "good —

morning“ as you make your way down the passage or an offer for help if you look lost. And in a welcome relieffor the American contingent, the [MC system doesn’t crackle with announcements 24 hours

day, and the officers don‘t carry

third of the ship asleep at any given time, it doesn‘t make much sense to be waking them by blaring unnecessary announcements every few minutes," one British officer said. In fact, the only announcement is from the operations centre that details the day's plan and tests important alarms.The only other time you hear the loudspeaker is when there‘s a problem, such as a fire or engineering casualty. And why don’t the officers carry radios like theirAmerican counterparts? “What the bloody hell do you need a radio for?" the British officer asked. “You know the plan, what the cnptain‘s intentions and expectations are. As an officer, your iob is to lead, and if you need to talk to the captain all the time, then you’re not doing your job or letting him do his." Another philosophical difference is that the British are open to ideas that to Americans seem goofy, but work, such as the 12" ramp at the bow of the ship that dramatically improves Harrier operations. Senior US naval ollicers over the decades have vetoed the idea, saying they don’t like how it looks and that it takes up three helicopter landing spots. British and Marine officers say only one deck spot is lost to the “ski jump." To a man, Marine pilots want the ramps installed on their ships to improve operational flexibilityand safety. "\\’.’e‘re all in love with the ski ratnp because when you come off that ramp, you’re flying,"Bradicich said. “From our ships, if you’re fully loaded, you need 750 feet, and even then you've got some sink once you clear the deck. Here, you can do the same thing in -I-50 feet and

But the ramp is

sight, pilots said. “I expected it to be violent, but when you take off, it's almost a non-event," said Mai. Grant ‘Postal’ Pennington, a pilot withVMA—'3l3 at Marine Corps Air Station Yuma, Arizona. “Up you go, and you're climbing. It’s a great experience.” Equally important is the ship that‘s bolted to the ramp, pilots said.

“Some of our younger guys who haven‘t flown from our ships yet are in for a big surprise when they do,“ Bradicich said. “This is probably the best ship you could possibly fly a Harrier from. It's not very big, but it's really stable, no roll, just a little pitch, not like the flat—bottom gators that roll so much. You’ve got the island moving 30 feet in each direction when you're trying to land. That tends to get your attention.“ The combinationof ski ramp, stability and dedicated crew contributed to breakneck operational pace. The a Marines proudly logged a ship record of 79 take—offs and landings in one day. “These guys are great.'\l(”’vequalified 28 guys in three days, most with eight landings and take—offs, so even though we

said that we were going to crawl,walk,

pace has been tremendous, even

with different procedures,” Pennington said. “We like to approach the ship at 4'3'and hit one of the spots, but they approach from dead astern, come to a hover abeam, slide over, then drop down to the deck. It's different, but you get the hang of it.” The only downside? “The thought that we’re going to have to get off," Bradicich said. To welcome the Marines aboard, the ship’s company invited their American guests to an evening of traditional Royal Navy tomfoolery, Horse Racing

Night. Outlandish costumes were encouraged, and the event, held in the ship‘s hangar deck on July 21 becauseof choppy weather, was hosted by an Elvis impersonator in full polyester regalia as the ship's band played. The next day, an athletic competition was held on Illustrious’ flight deck, pitting the Royal Navy against the Marine Corps in six events: rowing; weightlifting; tractor pull; the standard Royal Navy physical fitness, or ‘bleep,’ test; shuttle run with two 40—pound sandbag weights; and a tug of war. To the Marines‘ chagrin, the Brits won all the events except for weightlifting. In a more military contest, the Marine aircraft dropped dummy bombsand fired 20mm rounds against a target towed by Illustrious that produces a geyser of water and serves as an aim point. Sailors expressed confidence that the

Marines wouldn’t hit the target, and despite several close calls including a mock bomb attack by one of the youngest pilots, lst Lt Douglas ‘Rosie’ Rosenstock that lifted it out of the water, the target escaped unscathed. Reproduced by permission ol US Marine Corps Tirnes —