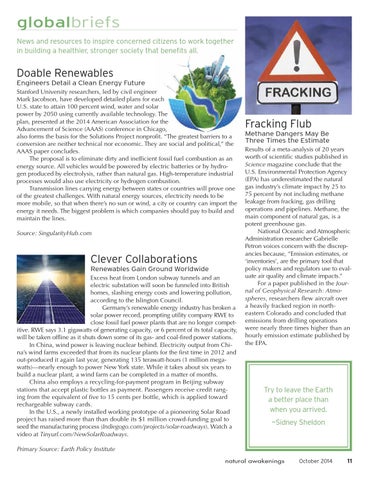 globalbriefs News and resources to inspire concerned citizens to work together in building a healthier, stronger society that benefits all.

Engineers Detail a Clean Energy Future Stanford University researchers, led by civil engineer Mark Jacobson, have developed detailed plans for each U.S. state to attain 100 percent wind, water and solar power by 2050 using currently available technology. The plan, presented at the 2014 American Association for the Advancement of Science (AAAS) conference in Chicago, also forms the basis for the Solutions Project nonprofit. “The greatest barriers to a conversion are neither technical nor economic. They are social and political,” the AAAS paper concludes. The proposal is to eliminate dirty and inefficient fossil fuel combustion as an energy source. All vehicles would be powered by electric batteries or by hydrogen produced by electrolysis, rather than natural gas. High-temperature industrial processes would also use electricity or hydrogen combustion. Transmission lines carrying energy between states or countries will prove one of the greatest challenges. With natural energy sources, electricity needs to be more mobile, so that when there’s no sun or wind, a city or country can import the energy it needs. The biggest problem is which companies should pay to build and maintain the lines. Source: SingularityHub.com

Renewables Gain Ground Worldwide Excess heat from London subway tunnels and an electric substation will soon be funneled into British homes, slashing energy costs and lowering pollution, according to the Islington Council. Germany’s renewable energy industry has broken a solar power record, prompting utility company RWE to close fossil fuel power plants that are no longer competitive. RWE says 3.1 gigawatts of generating capacity, or 6 percent of its total capacity, will be taken offline as it shuts down some of its gas- and coal-fired power stations. In China, wind power is leaving nuclear behind. Electricity output from China’s wind farms exceeded that from its nuclear plants for the first time in 2012 and out-produced it again last year, generating 135 terawatt-hours (1 million megawatts)—nearly enough to power New York state. While it takes about six years to build a nuclear plant, a wind farm can be completed in a matter of months. China also employs a recycling-for-payment program in Beijing subway stations that accept plastic bottles as payment. Passengers receive credit ranging from the equivalent of five to 15 cents per bottle, which is applied toward rechargeable subway cards. In the U.S., a newly installed working prototype of a pioneering Solar Road project has raised more than than double its $1 million crowd-funding goal to seed the manufacturing process (Indiegogo.com/projects/solar-roadways). Watch a video at Tinyurl.com/NewSolarRoadways.

Methane Dangers May Be Three Times the Estimate Results of a meta-analysis of 20 years worth of scientific studies published in Science magazine conclude that the U.S. Environmental Protection Agency (EPA) has underestimated the natural gas industry’s climate impact by 25 to 75 percent by not including methane leakage from fracking, gas drilling operations and pipelines. Methane, the main component of natural gas, is a potent greenhouse gas. National Oceanic and Atmospheric Administration researcher Gabrielle Petron voices concern with the discrepancies because, “Emission estimates, or ‘inventories’, are the primary tool that policy makers and regulators use to evaluate air quality and climate impacts.” For a paper published in the Journal of Geophysical Research: Atmospheres, researchers flew aircraft over a heavily fracked region in northeastern Colorado and concluded that emissions from drilling operations were nearly three times higher than an hourly emission estimate published by the EPA.

Try to leave the Earth a better place than when you arrived. ~Sidney Sheldon 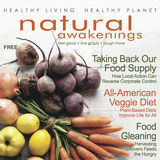