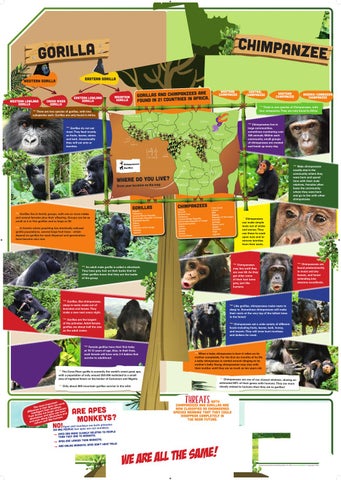 There is one species of Chimpanzees, with four subspecies. They are only found in Africa.

There are two species of gorillas, with two subspecies each. Gorillas are only found in Africa.

Chimpanzees live in large communities, sometimes numbering over 100 animals. Within each community, small groups of chimpanzees are created and break up every day.

Gorillas do not eat meat. They feed mostly on fruits, leaves, stems and bark. Occasionally they will eat ants or termites.

Where do you live? Draw your location on the map

Gorillas live in family groups, with one or more males and several females plus their offspring. Groups can be as small as 4 or five gorillas and as large as 50.

In forests where poaching has drastically reduced gorilla populations, several large fruit trees - which depend on gorillas for seed dispersal and germination have become very rare.

Gorillas, like chimpanzees, sleep in nests made out of branches and leaves. They make a new nest every night.

Chimpanzees eat a wide variety of different foods including fruits, leaves, bark, honey, and insects. They will even hunt monkeys and duikers for meat.

Female gorillas have their first baby at 10-12 years of age. Also, in their lives, each female will have only 3-4 babies that survive to adulthood.

The Cross River gorilla is currently the world’s rarest great ape, with a population of only around 250-300 restricted to a small area of highland forest on the border of Cameroon and Nigeria.

Chimpanzees are one of our closest relatives, sharing an estimated 98% of their genes with humans. They are more closely related to humans than they are to gorillas!

Only about 900 mountain gorillas survive in the wild.

Chimpanzees are found predominantly in moist and dry forests, and forest extending into savanna woodlands.

Like gorillas, chimpanzees make nests to sleep in. Sometimes chimpanzees will make their nests at the very top of the tallest trees in the forest!

Gorillas are the largest of the primates. Adult female gorillas are about half the size as the adult males.

th primates Apes and monkeys are bo onkeys. ! O N are not m (so are people) but apes

Chimpanzees can make simple tools out of sticks and stones. They use these to crack open nuts and to remove termites from their nests.

Chimpanzees may live until they are over 60. As they get older some of their hair turns grey, just like humans.

An adult male gorilla is called a silverback. They have grey hair on their backs that let other gorillas know that they are the leader of the group.

bOTH CHIMPANZEES AND GORILLAS ARE NOW CLASSIFIED AS ENDANGERED SPECIES MEANING THAT THEY COULD DISAPPEAR COMPLETELY IN THE NEAR FUTURE.

Diseases may be transmitted from humans and livestock to great apes. If you are sick or If you go to the toilet in the forest it can make chimpanzees and gorillas sick. They can even die from human diseases.

Poachers set snares to capture forest antelope and chimpanzees and gorillas may get caught instead. Poaching of great apes for bushmeat is illegal. Baby gorillas and chimpanzees kept as pets usually do not survive very long.

Much of the forest where chimpanzees and gorillas live has been destroyed by people’s farms, cutting trees for timber, and other human activities. When people illegally harvest trees or other items inside the forest, it destroys the great apes’ forest homes.

Created and published by Stichting Nature for Kids www.natureforkids.nl Copyright ® 2013. 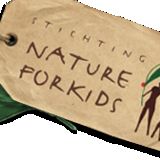