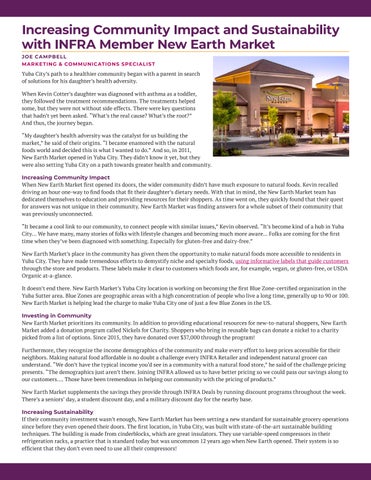 Yuba City’s path to a healthier community began with a parent in search of solutions for his daughter’s health adversity. When Kevin Cotter’s daughter was diagnosed with asthma as a toddler, they followed the treatment recommendations. The treatments helped some, but they were not without side effects. There were key questions that hadn’t yet been asked. “What’s the real cause? What’s the root?” And thus, the journey began. “My daughter’s health adversity was the catalyst for us building the market,” he said of their origins. “I became enamored with the natural foods world and decided this is what I wanted to do.” And so, in 2011, New Earth Market opened in Yuba City. They didn’t know it yet, but they were also setting Yuba City on a path towards greater health and community. Increasing Community Impact When New Earth Market first opened its doors, the wider community didn’t have much exposure to natural foods. Kevin recalled driving an hour one-way to find foods that fit their daughter’s dietary needs. With that in mind, the New Earth Market team has dedicated themselves to education and providing resources for their shoppers. As time went on, they quickly found that their quest for answers was not unique in their community. New Earth Market was finding answers for a whole subset of their community that was previously unconnected. “It became a cool link to our community, to connect people with similar issues,” Kevin observed. “It’s become kind of a hub in Yuba City… We have many, many stories of folks with lifestyle changes and becoming much more aware... Folks are coming for the first time when they’ve been diagnosed with something. Especially for gluten-free and dairy-free.” New Earth Market’s place in the community has given them the opportunity to make natural foods more accessible to residents in Yuba City. They have made tremendous efforts to demystify niche and specialty foods, using informative labels that guide customers through the store and products. These labels make it clear to customers which foods are, for example, vegan, or gluten-free, or USDA Organic at-a-glance. It doesn’t end there. New Earth Market’s Yuba City location is working on becoming the first Blue Zone-certified organization in the Yuba Sutter area. Blue Zones are geographic areas with a high concentration of people who live a long time, generally up to 90 or 100. New Earth Market is helping lead the charge to make Yuba City one of just a few Blue Zones in the US. Investing in Community New Earth Market prioritizes its community. In addition to providing educational resources for new-to-natural shoppers, New Earth Market added a donation program called Nickels for Charity. Shoppers who bring in reusable bags can donate a nickel to a charity picked from a list of options. Since 2015, they have donated over $37,000 through the program! Furthermore, they recognize the income demographics of the community and make every effort to keep prices accessible for their neighbors. Making natural food affordable is no doubt a challenge every INFRA Retailer and independent natural grocer can understand. “We don’t have the typical income you’d see in a community with a natural food store,” he said of the challenge pricing presents. “The demographics just aren’t there. Joining INFRA allowed us to have better pricing so we could pass our savings along to our customers…. Those have been tremendous in helping our community with the pricing of products.” New Earth Market supplements the savings they provide through INFRA Deals by running discount programs throughout the week. There’s a seniors’ day, a student discount day, and a military discount day for the nearby base. Increasing Sustainability If their community investment wasn’t enough, New Earth Market has been setting a new standard for sustainable grocery operations since before they even opened their doors. The first location, in Yuba City, was built with state-of-the-art sustainable building techniques. The building is made from cinderblocks, which are great insulators. They use variable-speed compressors in their refrigeration racks, a practice that is standard today but was uncommon 12 years ago when New Earth opened. Their system is so efficient that they don’t even need to use all their compressors!