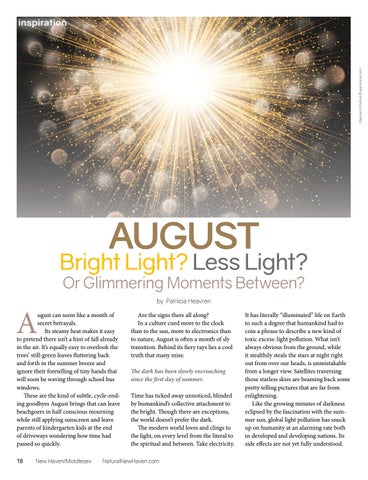 ugust can seem like a month of secret betrayals. Its steamy heat makes it easy to pretend there isn’t a hint of fall already in the air. It’s equally easy to overlook the trees’ still-green leaves fluttering back and forth in the summer breeze and ignore their foretelling of tiny hands that will soon be waving through school bus windows. These are the kind of subtle, cycle-ending goodbyes August brings that can leave beachgoers in half conscious mourning while still applying sunscreen and leave parents of kindergarten kids at the end of driveways wondering how time had passed so quickly. 18

Are the signs there all along? In a culture cued more to the clock than to the sun, more to electronics than to nature, August is often a month of sly transition. Behind its fiery rays lies a cool truth that many miss: The dark has been slowly encroaching since the first day of summer. Time has ticked away unnoticed, blinded by humankind’s collective attachment to the bright. Though there are exceptions, the world doesn’t prefer the dark. The modern world loves and clings to the light, on every level from the literal to the spiritual and between. Take electricity.

It has literally “illuminated” life on Earth to such a degree that humankind had to coin a phrase to describe a new kind of toxic excess: light pollution. What isn’t always obvious from the ground, while it stealthily steals the stars at night right out from over our heads, is unmistakable from a longer view. Satellites traversing those starless skies are beaming back some pretty telling pictures that are far from enlightening. Like the growing minutes of darkness eclipsed by the fascination with the summer sun, global light pollution has snuck up on humanity at an alarming rate both in developed and developing nations. Its side effects are not yet fully understood. 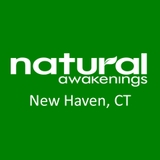