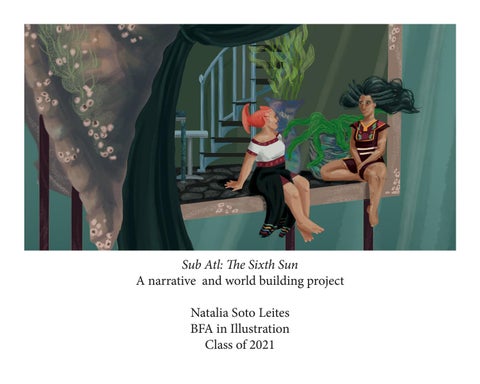 Sub Atl is a world building project that seeks to explore the mix of the natural world, the contemporary world and a fictitious, fantastic future world where everything is flooded and people have developed animal characteristics to adapt. It is a visual expression of my research done into the culture and aesthetics of Mexico, in an attempt to connect my roots and upbringing to my art practice, which has itself grown in a different country and with many many sources of inspiration. This project started as a way to strenghten my concept art and world building, with the possibility of someday being turned into a graphic novel. It is based, as I previously mentioned, on Mexico, specifically on Xochimilco, one of the municipalities in Mexico City. It’s development has also been influenced by authors of the literary movement of magical realism like Isabel Allende and the dual identiy that many Mexican people experience due to both previous immigration into Mexico and colonialism, as well as contemporary emmigration from Mexico to places like the USA or Canada (such as myself). This project is still in development and probably will be for a while, but for now it has cast of characters and their environments. These characters are all my own exploration of what contemporary and traditional aesthetics combined could be, but if these aesthetics were all based on animals, thieir history (through a Mexican lens) and personality.

Tenochtitlan has fallen. Again. In the historic center of Mexico City (originally named Tenochtitlan until the Conquest), the Metropolitan cathedral finally sunk through centuries of foundations stacked one on top of the other, and into the lake where what we know today as Mexico City was first built. The displacement of water has reached and flooded every corner of the capital, and led to what some archeologists are referring to as “The Sixth Sun” in reference to the belief that, before humanity became what it is today, Mexica gods recreated the world and their people five times before. Each era is one Sun, and so with the flooding of Mexico City and the evolution of its people that followed, we have entered the Sixth Sun.

Itzia is based on a possum, as her tail and how she uses indicate. For her color palette, I researched the Wixárika myth of the possum, which explains how it got its bald tail. In this legend, the possum is the Mexican version of Prometheus. It lit its tail on fire to get it to the humans in exchange of them not hunting its species anymore, which is why it doesn’t grow fur on its tail. On Itzia, I explored this through the colors of her clothes, bringing in bright orange flowers on an otherwise desaturated, or burnt out, color palette. Her hair mimics the white tipped fur of a possum, and she wears more street style clothing.

Bruno’s origial design was more obviously birdlike, with white wispy hair and mustache. His redesign explores the shape and silhouette of a great blue heron more. The most obvious element of this is his poncho, which mimics open wings both in its shape and in the pattern on the poncho itself. I gave him big, long feet that would help him hold onto his house boat, and also with the purpose of letting him walk on water, like some water birds do. His color palette connect him both to the animal that insipre him and to his environment.

Marco is, out of all the characters, the only one with a connection to a Mesoamerican deity. While researching what kinds of frogs there are in Xochimilco and what frogs mean in Mexico, I came across Tlaltecuhtli, who’s associated with chaos and death but also creation and life and is associated with water. Most interestingly, this deity to me embodied gender fluidity, as its name is in the masculine form but often was depicted with feminine features and in the birthing position. Combine this with the fact that some frogs have the genetic ability to change their gender, and Marco came to life. As they are one of the two amphibians in this universe, I wanted them to visually be a bridge between the surface and underwater world, so their clothing contains elements connected to both Bruno, Zyanya and Yali, but with a color palette that will still make them stand out.

Zyanya’s name means “eternal” in Nahuatl, the indigenous language of most communities in central Mexico. I chose this name in reference to axolotls’ regenerative properties. Zyanya was the very first piece of this project I developed, and I immediately knew which animal I wanted to base her off of. As she was my first design, she has the least obvious animal characteristics out of all the other characters. I was going for subtlety when I started this project in an attempt to channel Isabel Allende’s discreetly fantastic characters. The vitiligo on Zyanya’s skin and her front hair pieces which in the water become an axolotl’s gills, as well as her webbed feet are the hints I give the audience about Zyanya’s inspiration.

My main focus on her character design was her outfit and the mixing of traditional Mexican embroidery and a more athletic, contemporary look that will also work as an underwater outfit.

Yali was the second character I developed for this universe. She was both a self indulgent character as well as a challenge that pushed me to draw a figure outside my comfort zone. Her specific species wasn’t as important as it is in the other characters. Instead I focused on exploring how clothing can work underwater beyond being just a bodysuit or bathing suit, as well as seeing what different forms a mermaid-esque character can have, without falling into a cliché representation.

The surface of the Sub Atl world is directly inspired by Xochimilco’s flat boats, known as trajineras, and the stilt houses found in Vietnam. The idea was to take the dexterous, easily navigated trajineras and make them more than transportation. Keeping the color and decoration you see on the trajineras accurate in the house boat design was the main priority f this design, as well as exploring how you render each material and how textures can work together. Whether or not the houseboats are connected to the underwater architecture of Sub Atl is still under review. While it could serve as strong commentary, it would hinder the main purpose of these houses: their ability to move through the water like a boat.

The underwater environment of Sub Atl is significantly more fantastic and less based on mexico that the surface is. It is more of an exploration of how ruins and natural elements could come together to create something new. Most importantly, what had to stand out was that despite there being a clear sense of reverance and ancientness, that the environment was somewhere that looks habited at the same time. The shell houses were originally an exploration of how one can visually depict social hierarchies, with the being underneath and attached to the house boats, but this idea is too underdeveloped at this point to make it canon. The houses in the river floor are a stronger connection to pre-colonial religion. The icons at the top of each house are based on a representation of Tlaloc, the Mexica god of rain, as well as artifacts and animal depictions that are actually seen in archeological sites.

Natalia Soto Leites is a Mexican illustrator based in Vancouver, Canada whose work is inspired by the many fantasy novels and movies she relished in as a child and the bright colors of Mexican artisanal arts. Having moved from Mexico City to attend Emily Carr University, Natalia combines fiction, surrealism, and reflecting on the world she lives in through character and creature design, and world building. Her main medium is digital illustration, but has explored 3D modeling in both digital and analog formats. 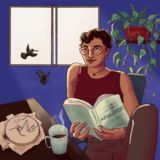 Tenochtitlan has fallen. Again. In the historic center of Mexico City (originally named Tenochtitlan until the Conquest), the Metropolitan...

Tenochtitlan has fallen. Again. In the historic center of Mexico City (originally named Tenochtitlan until the Conquest), the Metropolitan...