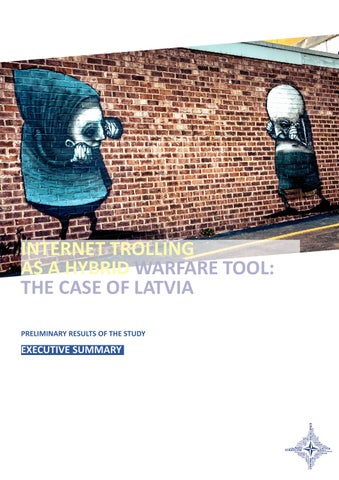 INTERNET TROLLING AS A HYBRID WARFARE TOOL: THE CASE OF LATVIA PRELIMINARY RESULTS OF THE STUDY

EXECUTIVE SUMMARY The executive summary outlines the main conclusions of the larger project “Social media as a weapon in the context of hybrid warfare” for which the final results will be presented at the end of September 2015. The study was conducted by the Latvian Institute of International Affairs in cooperation with Riga Stradins University and the Artificial Intelligence Laboratory of the Institute of Mathematics and Informatics (University of Latvia)*, and it was aimed at analysing how Internet and social network media is used to gain political and military aims by the state and non-state actors. The study focused on the identification of organised trolling in Internet media and measuring its influence on public discourse, using Latvia as a case study. The expected research results will provide an opportunity to evaluate the risk potential of trolling, and develop recommendations on how to mitigate its effects when used as a hybrid warfare tool. By analysing trolling as a manipulative tool, the study has discovered several new angles, thus contributing to the discussion on vulnerabilities caused by the use of Internet and social network media: - How Internet trolling is used in a hybrid warfare context; - What manipulative methods of trolling are used to influence public opinion; - Which groups of society are the most vulnerable to trolling; - How to identify a “hybrid-troll” and what are its distinctive features; - What are the possible defence strategies to mitigate trolling activities. The multidisciplinary approach – including communication science, social anthropology, political science and information technology expertise – was applied in order to understand the trolling phenomena and its impact on public perception. Both quantitative and qualitative research methods were used. By using “comment tracking” software the researchers collected and analysed more than 200 000 comments on the most popular Latvian web portals (delfi.lv, tvnet.lv and apollo.lv) both in the Latvian and Russian language. * Board of Authors: Prof. Andris Spruds, Asoc.Prof. Anda Rožukalne, Dr.Klavs Sedlenieks, Mr.Martins Daugulis, Ms. Diana Potjomkina, Ms.Beatrix Tölgyesi (UK), Ms. Ilvija Bruge.

In order to understand the impact of troll messages on public perception, several focus groups were organised and in-depth interviews held. The discussions focused on respondents’ possibilities to identify trolls, their attitude and reaction towards troll activities. Respondents were divided according to the Elmo Roper consumer style/lifestyle categorisation, which includes value analysis of respondents, and based on those values, their segmentation for focus group analysis. The study analysed the comments posted to the articles relating to the EU sanctions against Russia, in the period of 29th July 2014 – 12th August 2014. The time frame was chosen as a possible activity peak from the troll side, as on 29th July the EU declared the so called 3rd phase of sanctions against Russia and within two weeks, Russia responded with its own counter-sanctions against Europe. Therefore this issue had a potential to polarise society, and, leave a space for troll activities to impact on society. The study proposes to clarify the concept of the “internet troll” and provide the distinction among the “classical troll” which is aimed at causing emotional fluctuations to the participants in the Internet environment, and the “hybrid – troll” which acts as the tool of information warfare. Although at first sight, it is hard to recognise typical troll from hybrid-troll, certain side-tracks help to identify the latter such as disinformation, the spread of conspiracy theories and controversies, scaring tactics, and provocation. Various hybrid-troll message designs were identified during the study. They are consequently repeated and each of them is targeting a particular group of society and creating the illusion of a variety of commentaries. •

EXECUTIVE SUMMARY • Bikini troll – a troll that is expressing an oversimplified worldview in a short, from time to time, even naive manner. (The “Bikini” nickname was given to this troll due to the profile picture used by the troll– a young girl in a bikini swimsuit). The bikini troll is more adaptive to the internet environment, and it is hard to recognise it – only the nature of the content can serve as a sign of trolling. The content is simple – it can contain a question or/and a suggestion – “could it be that only Russia is bad? The world doesn’t work like that – maybe we should look…” which is then followed by a “blame the USA” motive. The bikini troll, despite the primitive message, is in fact, affecting a large part of the internet community as it is often not recognised as a troll.

HOW TO IDENTIFY AND TREAT A HYBRID TROLL? STEP 1 IDENTIFICATION OF HYBRID-TROLL • • • • • •

• Aggressive troll – this hybrid troll is the closest relative to the real trolls. However, behind the aggressively expressed message there is a quite clear position which it protects. The aggressive troll threatens its audience and it is pretty sure that the primary purpose of this troll is emotional fluctuations. Classical trolls can be highly responsive, as they are interested in prolonging the conflict, or on rare occasions, to provoke society towards taking real action, whereas the responsiveness of the hybrid-troll is very low (in some cases the reason could be the lack of appropriate language skills). • Wikipedia troll – is a specific hybrid-troll message design, where the troll is re-posting the information from Wikipedia (or other trustable information sources such as history blogs etc.) adding no emotional value to this information. Posted information is true per se, however it is used in a context which leads the audience to false conclusions. The Wikipedia troll is “tricky” because it is using what is generally considered to be trustworthy information, but the way it is expressed brings a totally different meaning for the reader. • Trolling message “with attachment” – the trolling message has a very poor use of words, but always contains a link attached (for example, from Russian news platforms, TV news, eye witness video in Youtube etc.). The link leads to real platforms, not commercials, virus program pages, etc., which would be the action of the classical trolls in order to annoy the audience. By attaching the link with the information, the primary aim of the hybrid-troll is to “educate” the audience. It is difficult to identify this troll, as its message is less “human”.

Ask a question – the classical troll is typically engaging with replies, for hybrid-troll reaction is close to impossible due to language issues Using Google: • same message, different profiles • same message, many replications (articles commented on various themes; timeline very broad – even up to 1 year)

Via comment! – for knowledge of more vulnerable Internet users If there is a mark already, proceed to step 4

It is absolutely necessarily to ignore a hybrid-troll and not engage in further discussion for several reasons: • The more users engage with the troll, the more verified it is • The more replies the troll receives, the more “clicked” in the future it is (snowball effect) – even the negative reactions can serve the purpose of the troll • Any reaction can serve for provocation in the future (an excerpt from a “reply chapter” can be used for generalisation to characterise “real views” of people about the issue (Russia Today mode). Internet trolling as a hybrid warfare tool: the case of Latvia.

Executive summary of the preliminary results of the study

Internet trolling as a hybrid warfare tool: the case of Latvia.

Executive summary of the preliminary results of the study