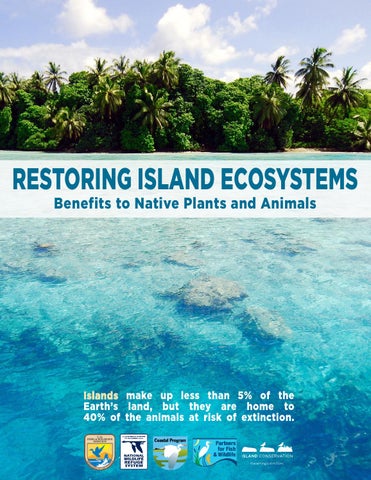 Islands are often home to remarkable plants and animals found nowhere else on Earth. Because islands are isolated, their ecosystems and native species are especially sensitive to invasive species. For this reason, islands provide an unmatched opportunity to save unique and imperiled plants and animals. Recognizing the importance of island ecosystems and their vulnerability to disturbances and invasive species, the U.S. Fish and Wildlife Service (Service) along with Island Conservation adopted an Island Restoration Memorandum of Understanding (MOU) to promote invasive species removal for the benefit of native plants and animals on islands. Other conservation agencies and organizations are encouraged to become members of the MOU. By working together, we can restore island ecosystems and prevent the extinctions of native island species.

WHY ISLANDS? Accounting for less than 5% of the Earthâ&#x20AC;&#x2122;s land, islands are home to an estimated 20% of all bird, reptile and plant species, and 40% of all critically endangered species.

THE PROBLEM Islands have been the site of 80% of extinctions, and invasive species are the leading cause.

The Service manages islands in over 200 National Wildlife Refuges. Many of these refuges have invasive species, which may impact as many as 161 threatened and endangered species. Pictured right: Nenes, found only on the Hawaiian Islands. Photo: John and Karen Hollingsworth/USFWS

THE SOLUTION Removing invasive species from islands eliminates a major threat to native plants and animals, allowing ecosystems to recover and enabling other restoration activities to be more successful.

IMPACTS OF INVASIVE SPECIES ON ISLANDS

The benefits of removing invasive species are unmistakable at Haleakalā National Park in Hawaii. Deer and feral livestock outside of an exclusion fence are stripping the native vegetation. Inside the fence, the park is a sanctuary for Hawaii’s native plants and animals. Photo: Don Reeser/NPS

Invasive plants, like this purple loosestrife, outcompete native plants, leading to a loss of native biodiversity and degraded ecological function.

Birds, such as the Guadalupe junco, lizards and other native species that rely on healthy plant communities for nesting, protection and food can recover.

The blue-footed booby and other seabirds play important roles by depositing nutrient-rich guano on land, contributing to plant growth and healthy ecosystems.

There have been over 1,000 successful invasive species removal projects on islands worldwide.

THE POWER OF PARTNERSHIP The Service’s Coastal Program and Partners for Fish and Wildlife Program are voluntary, partnership-based, habitat conservation programs that occupy complimentary niches in the Service’s landscape conservation strategy. The locally-based field staff have an intimate knowledge of the natural resource issues and conservation challenges in their communities. Staff work with willing partners to help deliver on-the-ground conservation that supports the Service’s mission to conserve fish and wildlife. Island Conservation is an international non-profit organization dedicated to preventing extinctions by removing invasive species from islands. Over the past 20 years, Island Conservation has deployed teams to protect 977 populations of 389 species on 52 islands.

Habitat conservation projects implemented by the Service’s Coastal Program and Partners for Fish and Wildlife Program have contributed to the delisting or downlisting of 20 threatened and endangered species.

Problem: Invasive rats devastated Palmyra Atoll’s ecosystem by consuming many of the native animals and plants. Rats devoured the seeds and seedlings of native trees, like Pisonia grandis, which provide nesting sites for the red-footed booby. Solution: In 2011, the Service, Island Conservation and The Nature Conservancy (TNC) collaborated to remove rats from the atoll. Prior to the eradication, biologists collected sensitive native animals, which were returned following the eradication. Results: As of 2014, the atoll ecosystem is steadily recovering, with a 271% increase in native seedlings. Once absent from the island, Pisonia seedlings that sprouted following the eradication are towering overhead. Likely present in low numbers, the restoration also allowed three new land crab species to reclaim the island.

Problem: A super-colony of invasive yellow crazy ants, covering approximately 70 acres, was devastating native animals on Johnston Atoll. Swarms of these acid-spraying ants caused many birds to abandon their nests, including the red-tailed tropicbird.

Problem: The island night lizard is found only on three of the Channel Islands of California, including San Nicolas Island. Predation by feral cats and habitat loss from grazing by feral goats and pigs led to the lizard to be listed as threatened under the Endangered Species Act (ESA) in 1977.

Solution: In 2010, the Service, Island Conservation, U.S. Department of the Navy, Institute for Wildlife Studies and The Humane Society of the United States removed cats from the San Nicolas Island.

Results: After 14 months, the eradication reduced the ant population by 99 percent, and the red-tailed tropicbird and other birds returned to their nests. Biologists continue to monitor and eradicate the ants to protect the world’s largest nesting colony of red-tailed tropicbird.

Problem: In 1967, the Nihoa millerbird was listed as endangered under the ESA. A small population and limited habitat makes the millerbird exceptionally vulnerable to extinction from an invasive predator or even one catastrophic hurricane.

Problem: Approximately 26% of Santa Cruz Island is impacted by invasive plants that displace native vegetation, including the endangered island bedstraw. The loss of native plants threatens the island ecosystem and native wildlife.

Solution: Invasive rabbits were eradicated from Laysan Island but not before the extinction of the Laysan rail, Laysan millerbird and Laysan honeycreeper. In 2011, the Coastal Program, American Bird Conservancy, National Oceanic and Atmospheric Administration (NOAA) and the Refuge System translocated millerbirds from Nihoa Island to Laysan Island to establish a second population, reducing the risk of extinction.

Solution: The Partners for Fish and Wildlife Program has worked with the County of Santa Barbara, Channel Islands Restoration, TNC, National Park Service (NPS), USGS and other partners to remove invasive vegetation.

Results: As of September 2014, the Laysan millerbird population has increased from 24 birds to 161 birds.

Results: The island ecosystem is recovering, as is the island bedstraw. The ecosystem restoration further benefits native wildlife, such as the endangered Santa Cruz Island fox. Following the removal of non-native golden eagles, the fox population is large enough that the Service is reconsidering its endangered status.

Problem: Invasive rats decimated native seabird populations by eating their eggs and vulnerable hatchlings, including the Scripps’s murrelet. One of the rarest seabirds, the Scripps’s murrelet is also one of the most threatened because it only nests on a few islands. Solution: In 2002, the Service, NPS, CA Dept. of Fish and Game, NOAA and Island Conservation completed the rat eradication which protected the murrelet and other native species. Results: By 2014, nesting by Scripps’s murrelets increased by six-fold to 60 nests, and hatching success increased three-fold to 85%. In 2012, another rare seabird, the ashy storm-petrel, was recorded nesting on the island for the first time. Restoration projects like this one help sustain vulnerable animals. Photo: Scripps’s murrelet. Glen Tepke/www.pbase.com/gtepke