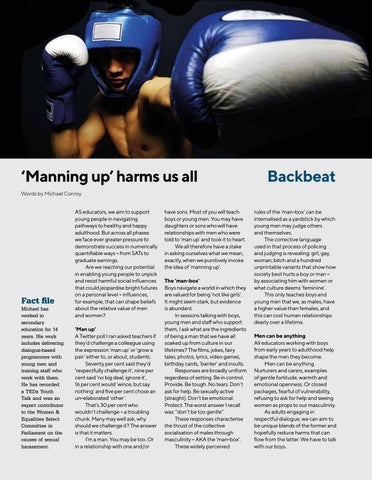 ‘Manning up’ harms us all

Michael has worked in secondary education for 14 years. His work includes delivering dialogue-based programmes with young men and training staff who work with them. He has recorded a TEDx Youth Talk and was an expert contributor to the Women &amp; Equalities Select Committee in Parliament on the causes of sexual harassment.

AS educators, we aim to support young people in navigating pathways to healthy and happy adulthood. But across all phases we face ever greater pressure to demonstrate success in numerically quantifiable ways – from SATs to graduate earnings. Are we reaching our potential in enabling young people to unpick and resist harmful social influences that could jeopardise bright futures on a personal level – influences, for example, that can shape beliefs about the relative value of men and women? ‘Man up’ A Twitter poll I ran asked teachers if they’d challenge a colleague using the expression ‘man up’ or ‘grow a pair’ either to, or about, students. Seventy per cent said they’d ‘respectfully challenge it’, nine per cent said ‘no big deal, ignore it’, 16 per cent would ‘wince, but say nothing’ and five per cent chose an un-elaborated ‘other’. That’s 30 per cent who wouldn’t challenge – a troubling chunk. Many may well ask, why should we challenge it? The answer is that it matters. I’m a man. You may be too. Or in a relationship with one and/or

have sons. Most of you will teach boys or young men. You may have daughters or sons who will have relationships with men who were told to ‘man up’ and took it to heart. We all therefore have a stake in asking ourselves what we mean, exactly, when we punitively invoke the idea of ‘manning up’. The ‘man-box’ Boys navigate a world in which they are valued for being ‘not like girls’. It might seem stark, but evidence is abundant. In sessions talking with boys, young men and staff who support them, I ask what are the ingredients of being a man that we have all soaked up from culture in our lifetimes? The films, jokes, fairy tales, photos, lyrics, video games, birthday cards, ‘banter’ and insults. Responses are broadly uniform regardless of setting. Be in control. Provide. Be tough. No tears. Don’t ask for help. Be sexually active (straight). Don’t be emotional. Protect. The worst answer I recall was: “don’t be too gentle”. These responses characterise the thrust of the collective socialisation of males through masculinity – AKA the ‘man-box’. These widely perceived

rules of the ‘man-box’ can be internalised as a yardstick by which young men may judge others and themselves. The corrective language used in that process of policing and judging is revealing: girl, gay, woman, bitch and a hundred unprintable variants that show how society best hurts a boy or man – by associating him with women or what culture deems ‘feminine’. This only teaches boys and young men that we, as males, have a higher value than females, and this can cost human relationships dearly over a lifetime. Men can be anything All educators working with boys from early years to adulthood help shape the men they become. Men can be anything. Nurturers and carers, examples of gentle fortitude, warmth and emotional openness. Or closed packages, fearful of vulnerability, refusing to ask for help and seeing women as props to our masculinity. As adults engaging in respectful dialogue, we can aim to be unique blends of the former and hopefully reduce harms that can flow from the latter. We have to talk with our boys.

The membership magazine of the National Education Union: NUT section. 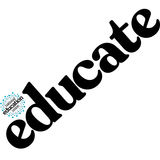