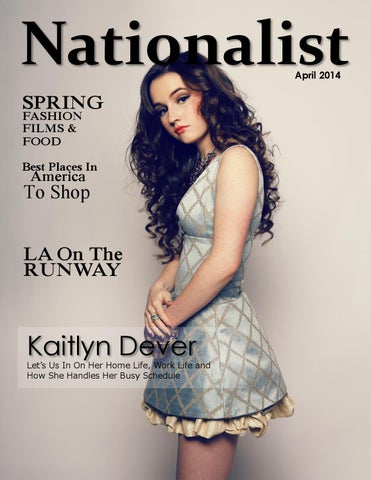 To Shop LA On The RUNWAY

Letâ&amp;#x20AC;&amp;#x2122;s Us In On Her Home Life, Work Life and How She Handles Her Busy Schedule

is for Nationalist Magazine

Go Ahead, Take It Off ! Itâ&amp;#x20AC;&amp;#x2122;s officially spring, that means summer is right around the corner and so is the stress of getting beach ready.

Swans Island Blankets are hand-dyed and hand-woven by our small group of craftspeople in our studio in Northport, Maine. We use only the cleanest, softest fleece, hand-dye the yarn with all natural materials. Each blankets edges are finished with silk threads, and closely inspected for flaws before shipping in our custom linen storage bags, with protective slats of aromatic cedar. Light summer weight wool . Made with all natural dyes, Domestic corriedale wool . Hand loomed

Ethereal and distant, but somehow wistfully familiar, MONOGEM is a mystery ready to be revealed. With a sound that idles somewhere comfortably between CHVRCHES and Solange, blissfully combined with just a potent hint of throwback disco, the project’s new EP, The Glow, is a collection of soulful synth pop anthems, as infectious as they are affectionate. Fronted by singer/songwriter Jen Hirsh, the project is a collaboration with producer/songwriter, Scott Smith. The MONOGEM live show is accompanied by Peter Dyer on keys, Chris Faller on bass/synth bass, Adam Tressler on guitar and Nate Lotz on the drums. The group takes us on an intoxicatingly refined journey through delicate vocals, dizzying harmonies and dance ready synths. Monogem&#39;s first online release, The Glow, debuted on Paper Magazine, who aptly noted that the project, “makes disco and funk-tinged synth pop that will make you want to groove, gurl.” And rightly so - the video for the track is a perfect montage of 1984 cult movie, Breakin’, an obvious nod to Monogem’s vintage roots.“It’s about letting go and transporting yourself into another realm,” Hirsh muses of the forthcoming release. “Everybody can relate, or at least I hope so, to that feeling you get on the dancefloor.” Monogem arrives with incredible force, from another world where pop music still has sentiment and soul. And just a bit of funk.

Kari’s story: A self-professed “beauty junkie,” Kari was diagnosed with an autoimmune thyroid disorder in her late 20s which she discovered was exacerbated by the toxin-laden beauty products that she had been using. Once she took a closer look at the products she was using on her face and body to discover that most if not all of them contained parabens and toxins (which have been linked to hormone disruption and a number of health issues,) she founded Kari Gran skin care with a mission to educate people about healthy skin care, and promote a holistic, natural approach to a beautiful complexion. Starting Kari Gran skin care: Kari and her business partner, Lisa Strain were introduced through their past workplace – real estate – and developed a special bond over time, considering each other almost sisters. 2010 was a particularly challenging time for their careers; the economy along with family complexities ultimately became a year to regroup, recharge and make changes. During a get together over lunch, aspirations for 2011 were discussed and one of Kari’s personal favorite topics came up –skin care and cosmetics, along with all she had learned in her personal explorations on the subject – from the chemistry to the misinformation that abounds. Kari’s passion for exploring ingredients and the skin care world was inspired after battling an autoimmune thyroid disorder, which caused her to take a second look at the beauty products she was putting on her skin. What she found was shocking; most every product on the market was full of parabens and toxins, things that have been linked to very serious diseases and hormone disruption, which played into her disorder. Eventually over lunch, Kari revealed that she had been making skin care products in her kitchen for years. Lisa, astounded by Kari’s depth of knowledge and passion for the topic suggested a possible game changer – joining forces to start a line of skin care products. Plans were hatched and Kari Gran skin care was launched: a clean, green, natural skin care system that feels beautiful, smells beautiful, is packaged beautifully, and most importantly, is kind to the skin. karigran.com 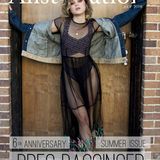