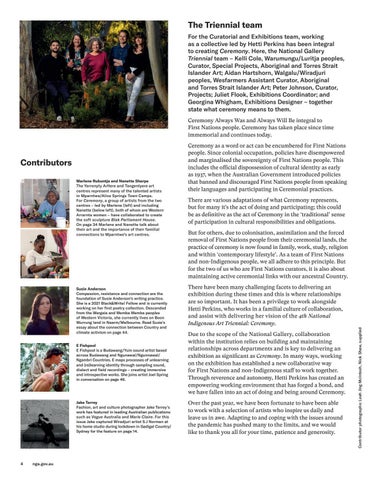 Marlene Rubuntja and Nanette Sharpe The Yarrenyty Arltere and Tangentyere art centres represent many of the talented artists in Mparntwe/Alice Springs Town Camps. For Ceremony, a group of artists from the two centres – led by Marlene (left) and including Nanette (below left), both of whom are Western Arrarnta women – have collaborated to create the soft sculpture Blak Parliament House. On page 34 Marlene and Nanette talk about their art and the importance of their familial connections to Mparntwe’s art centres.

Susie Anderson Compassion, resistance and connection are the foundation of Susie Anderson’s writing practice. She is a 2021 Black&amp;Write! Fellow and is currently working on her first poetry collection. Descended from the Wergaia and Wemba Wemba peoples of Western Victoria, she currently lives on Boon Wurrung land in Naarm/Melbourne. Read Susie’s essay about the connection between Country and climate activism on page 44.

There are various adaptations of what Ceremony represents, but for many it’s the act of doing and participating; this could be as definitive as the act of Ceremony in the ‘traditional’ sense of participation in cultural responsibilities and obligations. But for others, due to colonisation, assimilation and the forced removal of First Nations people from their ceremonial lands, the practice of ceremony is now found in family, work, study, religion and within ‘contemporary lifestyle’. As a team of First Nations and non-Indigenous people, we all adhere to this principle. But for the two of us who are First Nations curators, it is also about maintaining active ceremonial links with our ancestral Country. There have been many challenging facets to delivering an exhibition during these times and this is where relationships are so important. It has been a privilege to work alongside Hetti Perkins, who works in a familial culture of collaboration, and assist with delivering her vision of the 4th National Indigenous Art Triennial: Ceremony.

Due to the scope of the National Gallery, collaboration within the institution relies on building and maintaining relationships across departments and is key to delivering an exhibition as significant as Ceremony. In many ways, working on the exhibition has established a new collaborative way for First Nations and non-Indigenous staff to work together. Through reverence and autonomy, Hetti Perkins has created an empowering working environment that has forged a bond, and we have fallen into an act of doing and being around Ceremony.

Jake Terrey Fashion, art and culture photographer Jake Terrey’s work has featured in leading Australian publications such as Vogue Australia and Marie Claire. For this issue Jake captured Wiradjuri artist S.J Norman at his home studio during lockdown in Gadigal Country/ Sydney for the feature on page 14.

Over the past year, we have been fortunate to have been able to work with a selection of artists who inspire us daily and leave us in awe. Adapting to and coping with the issues around the pandemic has pushed many to the limits, and we would like to thank you all for your time, patience and generosity.

Ceremony as a word or act can be encumbered for First Nations people. Since colonial occupation, policies have disempowered and marginalised the sovereignty of First Nations people. This includes the official dispossession of cultural identity as early as 1937, when the Australian Government introduced policies that banned and discouraged First Nations people from speaking their languages and participating in Ceremonial practices. 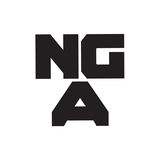