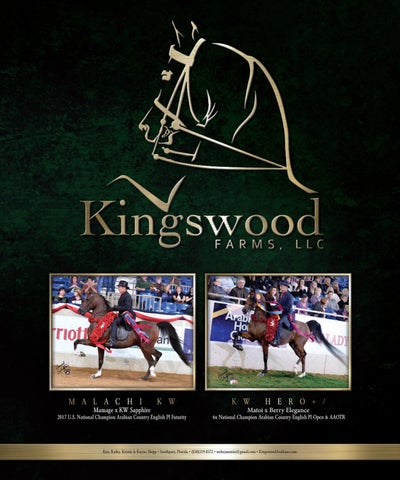 all in love with an Arabian horse, and life is never the same. Whether born into the industry or drawn by some unforeseen forces of fate, the people of the Arabian world are usually members for life. And this affiliation often entails a progressive level of involvement. Lessons turn into horse ownership, horse ownership turns into showing, and showing turns into the breeding of show horses. In the case of the Shipp family of Kingswood Farms in Southport, Florida, these steps happened virtually all at once, as they plunged into the world of breeding at nearly the same moment they started showing horses. Those forces of fate? They had some wisdom, as Kingswood Farms has quickly established itself as a premier breeder of Arabian horses and has set a standard for the modern English-style horse in America. Kingswood Farms is family owned and operated, the result of the efforts and passion of Ken and Kathy Shipp, along with their daughters, Kristie and Kayna. It started with Kristie, who was a “horse crazy girl” from the beginning. Like many young girls, she begged her parents for a horse, and they agreed that she could start riding lessons. After some research, they settled on a lesson program nearby in their Florida town. Kristie arrived for her first lesson, a dream come true, and that day was introduced to her first Arabian horse. The woman who ran the lesson program was a lover of Arabians, and her program was filled with Arabians at the time, their people-oriented temperaments and durability making them an ideal fit for a lesson program. One look into those liquid eyes, and Kristie was hooked. “I fell in love with them,” she says. “I loved their beauty, fun personalities and boundless energy.” When the Shipp family bought their first horse, it was, naturally, an Arabian. Kristie started showing in 2001, and the family’s first foal was born the following year. “We had absolutely no idea Kristie Shipp and KW Hero

what we were getting into with our first foals,” says Kristie. “I was in middle school, and it was one of the most exciting challenges of my life. I learned everything I could about equine reproduction, foaling, raising and training. I was so excited to see our first baby, so proud of myself when I was able to halter train him.” Later, Kristie showed that first homebred horse, Ambres Magic, to multiple National Top Tens in Halter and Hunter Pleasure. Not many middle schoolers could create a national-caliber horse on the first try, but Kristie was no ordinary teen. She had a passion and was an avid learner, and she had the support of her entire family in pursuing her dream. “It just made sense for us to attempt to breed our show horses, and it is something that has always interested us as a family,” she says. From the beginning, both Kristie and her dad carefully researched horses, pedigrees and show careers. They watched horses at shows and discussed their strengths and weaknesses, looking for patterns in the bloodlines. In 2011, they narrowed their focus to the English division, and that specialization cemented their path to developing a distinct English 108

look that is catching attention in the show ring. They enlisted the help of trainer, breeder and judge Joel Gangi to take their program to the next level. Joel agreed to help the Shipp family reach their breeding goals, and after examining their band of mares, suggested stallions that would complement them. He also found several mares to add to the Shipps’ already strong herd. “He has been a great sounding board whenever I want to try a different breeding combination,” Kristie states. Because of Joel’s knowledge of breeding, Kristie greatly values his opinion and has soaked up all the information she could. She is an enthusiastic student, who loves to study pedigrees. And not just pedigrees, but the flesh-and-blood results of successful crosses. “I am constantly watching horses at horse shows, looking for the horses that speak to me. When I find them, I look them up on the Arab DataSource and see where the qualities I am looking for came from,” she explains. “When a stallion from X lineage is bred to a mare from Y lineage, did the expected traits come out, or was the foal completely different from its pedigree?”

Kristie has quickly and efficiently developed a strong breeding philosophy, and like many of the greatest programs in the industry, it boils down to mares. “Mares, in my opinion, are the heart and soul of any breeding program,” she says. “I carefully choose my mares based on conformation, disposition and lineage. It is fairly easy to buy a breeding to the best-producing National Champion stallion of the day, but it is difficult to find great mares.” “Most of my mares hold a special place in my heart,” continues Kristie. She knows each mare intimately—their personalities, their pedigrees, their producing power. Her goal is to improve on her mares with each breeding, and doing so requires that she know each mare’s strengths and weaknesses. “If you just breed a ‘winning’ or ‘popular’ stallion to a quality mare without taking into account the qualities of either, you probably won’t end up with the foal of your dreams,” she states wisely. Though she loves all her mares, a few stand out to Kristie. Her two Mamage daughters,

Anastasia WB and Lucky Lady WB, have been consistent producers for Kingswood. Both mares represent the Kingswood legacy of a strong tail line, as both mares trace through their tail female line to the prolific *Eter daughter April Charm, a mare known for producing show ring champions and fantastic producers in their own right. Anastasia and Lucky Lady both have produced several foals, all with wonderful dispositions like their dams. Though none of their get are yet show ring age, two 3-year-olds—one out of each mare—are with Joel now, and it will be exciting to see them hit the show ring when they are ready. The current goal is to have them ready for the Futurity this year. Ames Holly has been a part of the Kingswood broodmare band since 2003. By the Afire Bey V son MR Holly Fire and out of Berry Elegance, she has produced several nice fillies, whom the Shipp family have retained for breeding purposes to preserve Holly’s outstanding pedigree, which includes such English royalty as Afire Bey V, Huckleberry Bey++, Baychatka++, *Eter and multiple traces to *Bask++.

She is also the dam of Regional Champion KW Harry Winston. The Shipps liked Holly so much that they bought her dam, Berry Elegance (Bayberrychask V x Elegance Of Taask) two years later, and she produced multi-National Champion KW Hero+/, by Matoi. “He is a great example of what type of horse I wish to produce in the future,” states Kristie. In addition to acquiring established producers, Kristie and her family have bred some of their own. KW Sapphire (Baske Afire x Ames Frolic, by Brass) stands out as a mare whose name will likely be remembered in the English ring. Her very first foal, a Mamage son named Malachi KW, debuted at U.S. Nationals last year and was named U.S. National Champion in the Arabian Country English Pleasure Futurity. She has four other sons on the ground, the newest born in early March, and they are all full siblings to Malachi and just as nice, according to Kristie. “[Malachi] is another horse that we are extremely proud to have produced, and hopefully his younger brothers will step up and follow in his footsteps,” says Kristie.

“I try to acquire the best mares that I can, ones that exemplify their bloodlines, and breed them to the stallions that will complement those particular mares the best,” summarizes Kristie. “I am hoping to produce National Champion English-type horses who themselves will go on to better the breed.” The Kingswood program is well on its way. The breeding program features such influential bloodlines as *Bask++, Apollopalooza, MHR Nobility, Afire Bey V, Mamage, Zodiac Matador+, Huckleberry Bey++ and Afires Heir, stallions who have each had a profound effect on the modern English division. Kristie and her family choose from this illustrious gene pool based on the characteristics they hope to pass to the next generations. “For some, it’s the hocks, some the ears or eyes, some the shape of the neck,” says Kristie. “Breeding requires a delicate balance of the characteristics that are desirable alongside those traits that aren’t so desirable.” VOLUME 3:2 | 2018

In the end, these diverse bloodlines, when combined in the right way, all lead to one thing: English powerhouses. A visit to Kingswood is a visit to English paradise. Foals with the uphill conformation, upright necks and powerful hindquarters necessary to become the next show ring stars roam the pastures alongside their mothers, who are equally beautiful. One look and it is easy to see that the Shipp family not only has a vision for the English horse, they have a clear awareness of how to make it a reality. Furthermore, their sense of responsibility to the Arabian breed is admirable. “The most important thing about breeding is influencing the future of the breed,” says Kristie. “Without strong breeding programs, there will be no great horses.” Even as they have grown, Kingswood Farms continues to take a very hands-on approach to breeding and raising horses. Almost all breeding, foaling and early training is done on the family farm, which is situated on a beautiful property just outside Panama City. Kingswood currently has around 35 horses on the farm, and they breed four to six foals per year. Kristie herself personally manages the breedings, foals out the mares and teaches the foals from their first moments until they are ready to be sent for under saddle training. For the most part, broodmares at Kingswood carry their own foals, unless Kristie has a show mare she plans to breed. In those cases, she pursues an embryo transfer, and the recipient mare is brought to the farm to foal out. Once born, the foals are handled daily. Kristie understands that one aspect of a great show horse is trainability, and that early socialization will lead to good manners and easier training down the road. Kristie starts the youngsters in lines on the farm, and once they are ready, the Shipps send them to Joel Gangi in Baton Rouge, Louisiana, for further training and to eventually ready them for the show ring. As the farm continues to grow, the Shipps are searching for an in-house trainer to start the youngsters. For anyone interested in English, Kingswood Farms is a name to remember. As far as young breeding programs go, they have what it takes to be a name that echoes, the KW initials inscribed on the great English champions of the future. The driving force behind this success will surely be the passion of the Shipp family, and their dedication to making calculated crosses that will stand the test of time. For Kristie, influencing the future of the English division is both exhilarating and rewarding. “I love seeing each new foal crop and evaluating each breeding decision. I love that moment when you find out if the decisions you made a year ago or two years ago actually produced the horse that you wanted to produce,” she concludes. “I love watching the babies grow up and start their training. I love seeing them in the show ring. And I could not be more proud than when my babies win on the national level and everybody can see what that little foal I watched playing in the pasture can do in the show ring.”