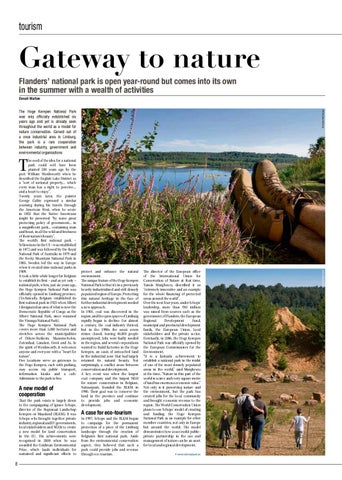 The Hoge Kempen National Park was only officially established six years ago and yet is already seen throughout the world as a model for nature conservation. Carved out of a once industrial area in Limburg, the park is a rare cooperation between industry, government and environmental organisations

A new model of cooperation That the park exists is largely down to the campaigning of Ignace Schops, director of the Regionaal Landschap Kempen en Maasland (RLKM). It was Schops who brought together private industry, regional and EU governments, local stakeholders and NGOs to create a new model for land conservation in the EU. His achievements were recognised in 2008 when he was awarded the Goldman Environmental Prize, which lauds individuals for sustained and significant efforts to

protect and enhance the natural environment. The unique feature of the Hoge Kempen National Park is that it’s in a previously heavily industrialised and still densely populated region of Europe. Protecting this natural heritage in the face of further industrial development needed a new approach. In 1901, coal was discovered in the region, and the open spaces of Limburg rapidly began to decline. For almost a century, the coal industry thrived, but in the 1990s the area’s seven mines closed, leaving 40,000 people unemployed. Jobs were badly needed in the region, and several corporations wanted to build factories in the Hoge Kempen, an oasis of untouched land in the industrial zone that had largely retained its natural beauty. Not surprisingly, a conflict arose between conservation and development. A key event was when the largest coal company and the largest NGO for nature conservation in Belgium, Natuurpunt, founded the RLKM in 1990. Their goal was to conserve the land in the province and continue to provide jobs and economic development.

A case for eco-tourism In 1997, Schops and the RLKM began to campaign for the permanent protection of a piece of the Limburg landscape through the creation of Belgium’s first national park. Aside from the environmental conservation aspect, they believed that such a park could provide jobs and revenue through eco-tourism.

The director of the European office of the International Union for Conservation of Nature at that time, Tamás Marghescu, described it as “extremely innovative and an example for the whole financing of protected areas around the world”. Over the next four years, under Schops’ leadership, more than €80 million was raised from sources such as the government of Flanders, the European Regional Development Fund, municipal and provincial development funds, the European Union, local stakeholders and the private sector. Eventually, in 2006, the Hoge Kempen National Park was officially opened by the European Commissioner for the Environment. “It is a fantastic achievement to establish a national park in the midst of one of the most densely populated areas in the world,” said Marghescu at the time. “Nature in this part of the world is scarce and every square metre of land has enormous economic value.” Not only is it preserving nature and the environment, but the park has created jobs for the local community and brought economic revenue to the region. The World Conservation Union plans to use Schops’ model of creating and funding the Hoge Kempen National Park as an example for other member countries, not only in Europe but around the world. His model demonstrates how a successful publicprivate partnership in the use and management of nature can be an asset for local and regional development. &#96;&#96; www.nationaalpark.be

he seed of the idea for a national park could well have been planted 200 years ago by the poet William Wordsworth when he described the English Lake District as a “sort of national property… which every man has a right to perceive… and a heart to enjoy”. Twenty years later, the painter George Catlin expressed a similar yearning during his travels through the American West, when he wrote in 1832 that the Native Americans might be preserved “by some great protecting policy of government... in a magnificent park... containing man and beast, in all the wild and freshness of their nature’s beauty”. The world’s first national park – Yellowstone in the US – was established in 1872 and was followed by the Royal National Park of Australia in 1879 and the Rocky Mountain National Park in 1885. Sweden led the way in Europe when it created nine national parks in 1909. It took a little while longer for Belgium to establish its first – and as yet only – national park, when, just six years ago, the Hoge Kempen National Park was officially opened in Limburg province. (Technically, Belgium established its first national park in 1925 when Albert I designated an area of what is now the Democratic Republic of Congo as the Albert National Park, since renamed the Virunga National Park). The Hoge Kempen National Park covers more than 5,000 hectares and stretches across the municipalities of Dilsen-Stokkem, Maasmechelen, Zutendaal, Lanaken, Genk and As. In the spirit of Wordsworth, it welcomes anyone and everyone with a “heart for nature”. Five locations serve as gateways to the Hoge Kempen, each with parking, easy access via public transport, information kiosks and a cafe. Admission to the park is free.

Top: A hike that began at Mechelse Heide Above, left: The Hoge Kempen has a network of routes for equestrians Above, right: A former mining area transformed in the Eisden area of Maasmechelen

Gateway Lieteberg Kick off your shoes and socks and enjoy a short but stimulating barefoot walk over woodchips, stone, grass, loam – and even water. Also at this gateway is the insect museum, a fascinating introduction to the world of creepy-crawlies. It includes a bee centre and greenhouses full of breeding butterflies. You can then put the theory you’ve learned into practice by following the insect path. One Saturday night per month there is a moth hunt. Gateway Pietersheim A great place to visit with children. Activities include a gnome trail, a small-animal zoo, a collection of farm animals to stroke and feed and an adventure playground. For older children, the moated Pietersheim Castle provides fun in the shape of an animated 3-D movie, fortifications, the cellar where the munitions used to be kept and the game Looking for Knights.

Gateway Station As Railway enthusiasts will love this gateway. Here you can take a ride in an old diesel train, to Waterschei or Eisden, or even spend the night in an authentic overnight train. There’s also a minitrain that takes you on a 1,300-metre ride through the forest. It passes a tall watchtower, a replica of the derrick with which André Dumont discovered coal in As in 1901. Climb to the top to get great views over the park. You can also take a tour with a rail bike on the tracks of the old coal trains.

2 hours The 5.5km circular yellow walk starts and ends at the car park. The first part is through mixed woodland of ash, silver birch and oak. At this time of the year it’s particularly noisy, with the songs of blackcaps, chiffchaffs and great tits serenading you. Then you step out from the woods into heathland, and even if you were blindfolded you’d notice the difference immediately. Gone are the woodland birds, replaced by the songs and calls of skylarks, linnets, whitethroats and stonechats. 4 hours Still got some energy and time? Then continue along the 5.3km blue walk, which will take you to the dizzy heights of 104 metres above sea-level: the highest natural point in the Hoge Kempen. On a clear day you can see as far as Liège, Maastricht or even into Germany. From this vantage point I was also delighted to hear one of my favourite birds – the grasshopper warbler. You probably won’t see this tiny bird as it’s so reclusive, but you can hear it up to a kilometre away. Its unusual, continuous song has been likened to the rewinding of a fishing reel. Once heard, never forgotten. 6 hours Go on, you can do it! Fortify yourself with lunch at the Salamanderke cafe and then head directly south, first along the green path and then the brown connecting path, which will take you under the E314 to the marshy Kikbeekbron area. Here, squadrons of dragonflies zoom over the ponds, dropping their egg-bombs into the water. Watch out for sand martins, too, which nest in the steep sides of the quarry. And on your way back, check out the oak woods around the camping site for pied flycatchers and redstarts. © Misjel Decleer

Gateway Kattevennen Unique here is the Cosmodrome, where you can watch a show about the stars and planets and look through a genuine telescope. Kattevennen is also the best place to go horse riding: With advance notice, you can saddle up at Manege Kattevenia for a riding lesson. There’s also a botanical garden, a petting zoo and a children’s playground.

Gateway Mechelse Heide I’m a nature lover and keen hiker, so this is my favourite gateway. It doesn’t have a visitor centre, so a quick trip to the Maasmechelen tourist office is advisable to pick up an excellent map of the area for €2. No fewer than nine paths are laid out through this part of the National Park. All are colour-coded and clearly signposted. Here are my suggestions for three walks, depending on the time you have available (or how quickly your legs give out).

The Hoge Kempen National Park is accessible via five “Gateways”. At each one is a car park, a cafe and an information board, while some have visitor centres. Each offers a good starting point for hiking, cycling, mountain biking and horse riding, but each one also offers its own flavour and unique experience of the park.